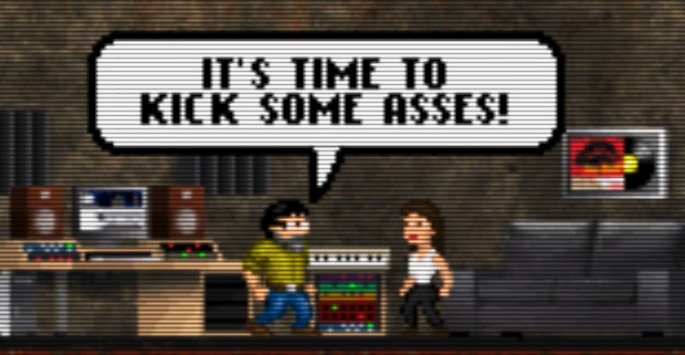 The retro side-scroller has just launched on Kickstarter.

A Spanish DJ has developed a Ghosts ‘n Goblins-inspired arcade game that pits players against the evil tyrants of EDM.

In Ghosts ‘n DJs, you play as the game’s creator Dr Kucho, a DJ and producer out to take down the “fake artists that became stars because of their money”, namely Devil Gueta, Paris Sheraton and Steve Sushi (we’re definitely not condoning that last pseudonym).

Take them down by attacking with weapons like vinyl records and pen drives, while avoiding a barrage of evil kisses and flying cakes. The finished version will have four levels, from bedroom DJ to “DJ that actually makes music A.K.A. producer”, and Kucho will also create a soundtrack – orchestral or chiptune, he hasn’t decided yet.

The game has just over a month left on Kickstarter and is currently at $5,846 of its lofty $45,000 goal – you can download the alpha version for Mac, Windows and Linux to test it out. [via Mixmag]