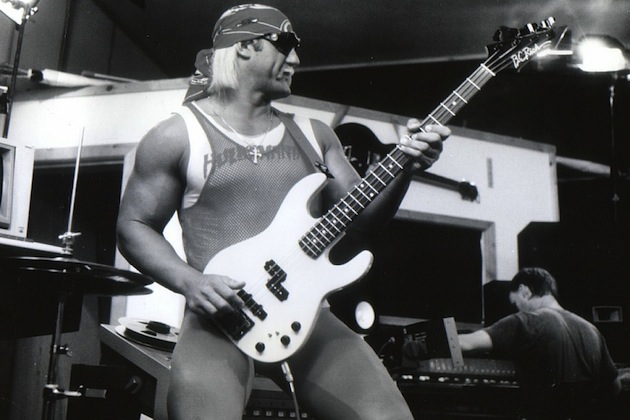 In a rather brilliant interview with Noisey, Hogan recounted a chance meeting with Jerry Hall that led him to offer his services to the Rolling Stones.

“I was in the UK for some award show, and Jerry Hall, Mick Jagger’s old lady, was walking out with me to present this award,” he said.

“I heard her talking on the phone to Mick about ‘Oh, you got to find a bass player and you’ve only got two different choices.’ I went ‘…what!?’ She had already told me that her kids are big fans, and she wanted merchandise, so I was like, ‘All right, let’s reel her in.’

I was like ‘Look, I used to play bass. I know all the Rolling Stones songs. Tell Mick if you guys need a bass player for the Rolling Stones, I swear to god I could show up. I could rehearse one day and play everything they play. Please tell Mick, please tell Mick.’ I got home, sent her all the merchandise — never heard a word back, right?”

Hogan kept his ear to the ground and soon enough heard that Metallica were looking for a bass player.

“I was writing letters, made a tape of myself playing and sent it to their management company. Kept making calls trying to get through,” he remembers. “I tried for two weeks and never heard a word back from them either. I would have quit wrestling to play in The Rolling Stones or Metallica. I was hoping for a call from them but never got one. All the haters were like, ‘You never auditioned for Metallica!’ Of course I didn’t – but I tried.”

Lars and co missed a trick there, surely? If Hogan’s still available, we’d like to suggest he gets in touch with Interpol, who a) are missing an iconic bass player and b) could do with a strong pair of hands to dig them out of that snowstorm.