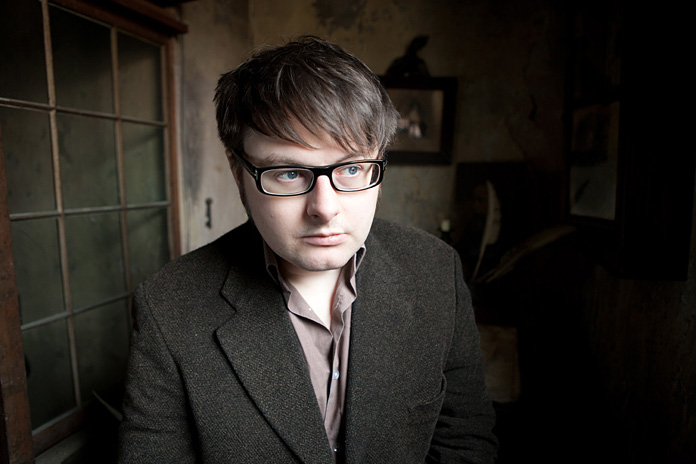 Emerging onto the beach into a big and bright North Devon afternoon, Nick Talbot exits through the side of a white, windowless tent, smiling and squinting through his glasses.

He spreads his arms to embrace a friend, perhaps a lover. She seemed like both.

The image stuck me, probably as I was still reeling from his wonderful performance in the gloom of the marquee that I’d caught by chance, drawn in by that big electronic drone that buzzed through the very quaint Lynmouth village.

This small moment of a big life came back to me a decade later when I learned Nick had died at 37, days before I was due to see him on his band Gravenhurst’s first tour in years. The “dearest friend whose absence brings indescribable sorrow” emerged at the turn of the century with a string of often tender, often blackly funny songs, drawing on traditional folk themes, but ornamenting them with elements of post-rock or electronica. His second album, 2004’s Flashlight Seasons, attracted the attention of Warp Records, where he remained for five albums as their much-loved black sheep.

He once said that his albums got successively darker as he moved east from the sunny environs of Bristol’s Clifton village, overlooking the Avon Gorge, towards Easton, a poor inner-city neighbourhood now bisected by a huge motorway bridge. Flashlight Seasons is a collection of wistful songs with rich instrumentation, including ‘Bluebeard’ and ‘The Diver’ – the latter possibly his most famous song after it was picked up by Shane Meadows for the Dead Man’s Shoes soundtrack.

Flashlight Seasons‘ songs proceed gently; they’re pastoral, filled with space. Similarly, 2005’s Black Holes in the Sand explores familiar country themes, but, in a similar fashion to Nick Cave’s Murder Ballads, uses traditional folk forms to tell tales of wanton murder that verge on black comedy. Fires in Distant Buildings was the closest Nick got to a rock album – an urban and world-weary recpod that propels its listeners through a half-alien, half-familiar world of dark uncertainty, best exemplified by ‘Velvet Cell’ and ‘Song from Under the Arches’.

Although Nick moved to Bristol just as the city’s ‘trip-hop’ music scene was taking off, he was more likely to be found at the shows of the city’s lesser sung lo-fi artists, mostly recording in their bedrooms. He retained a particular love for Third Eye Foundation and Flying Saucer Attack, in whose honour he wrote a 20th anniversary piece last year.

His long-standing and sporadically prolific blog Police Divers Notebook compiled oddities on, for example, the efforts of ontographist John Marshall Stamp to popularise his arcane field, the pointlessness of John Lydon, or the morality of coke dealers cutting their drugs. Nick was also a contributor to The Quietus, typically writing about fields other than music; among his contributions were a thoughtful interview with philosopher John Gray, and another with the press-shy Alan Moore, the man behind the graphic novels Watchmen and V for Vendetta.

I’ll remember Nick always for his sharp turns of phrase and the sincerity of his songs – and that brief and happy scene I caught him in on a summer’s day in front of a flat and boundless sea.