Digital mystics: the strange story of the 8-bit reggae underground 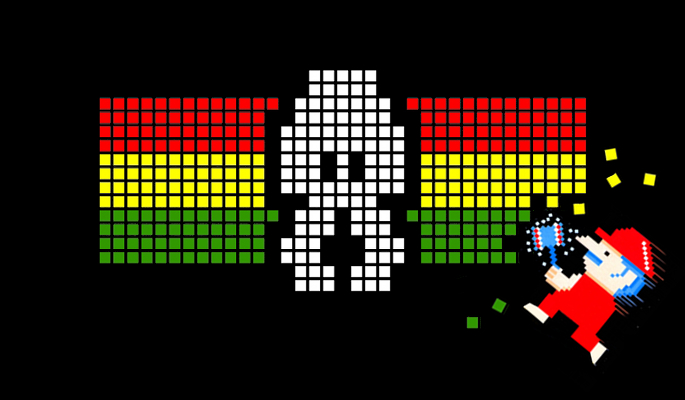 There is an alternative universe in which the most important reggae tune of 1985 was not Prince Jammy and Wayne Smith’s ‘Under Me Sleng Teng’, but the music to a Nintendo game called Wrecking Crew.

The game saw a pixelly young Mario smashing his way through a series of obstacles with a hammer as big as his face. The skanking soundtrack, with its square-wave walking bass and off-beat 8-bit accents, was created by a 27-year-old Sly and Robbie fan named Hirokazu “Hip” Tanaka. In this other world, kids who grew up with SNES controllers permanently appended to their thumbs are today busily recreating classic riddims using Gameboys, toasting over chiptunes, and colouring in power-up mushrooms with the distinctive red, gold, and green of the Ethiopian flag.

Fortunately, the internet is a place where all parallel worlds exist at once, and this alternative reality is just a few clicks away, down a wormhole composed of Wikipedia pages, Facebook groups, and Soundcloud communities. “The online presence of this music scene is vigorous,” writes Nicolas Nova, a Geneva-based researcher with the Near Future Laboratory, in his new book 8-Bit Reggae: Collision and Creolization. “Tracks are constantly shared on platforms such as Soundcloud and Facebook, and more discreet forums enable the participants to discuss the pluses and minuses of hardware and software tweakings.”

Of course, the same holds for almost any genre these days, but there’s something about the 8-bit reggae sound that makes it peculiarly online fauna. Participants lie way off Paul Gilroy’s ‘black atlantic’ in places like Leipzig, Trondheim, and Tokyo. They trace their musical roots, less to the competitive soundsystem cultures of Kingston and London; more to the hacker underground of the 1980s demoscene, which saw game crackers trading bootlegs on pre-WWW bulletin board systems, each with their own elaborate audio-visual signature demos.

The particular laid back swing of roots reggae long proved elusive to the demosceners, whose compositions tended to focus on melody over rhythm, lysergically reproducing Bach in glorious Mario-colour. “It is as if,” Nova ponders, “digital technologies such as tracker software remediated Western preconceptions about tonality, rhythm and instrumentation.” In a review of 8-Bit Reggae, Takashi Kawano of the SID Media Lab (a reference to the Sound Interface Device chip on the C64),  notes that only in the late noughties did the demoscene get interested in dubstep. Despite a few exceptions, the scene seems to have speedily worked its way backwards through the hardcore continuum from there, such that by 2013, the 8-bit reggae trend, in Kawano’s words, “was reaching a saturated state and coming crisis.”

Jan aka Disrupt, one of the founders of the Jahtari label back in 2004, would seem to be fairly typical in the sense that he grew up playing video games “a lot”, getting an early taste of rude boy rock from the ‘pirate reggae’ music invented by Michael Z. Land for The Secret of Monkey Island. “Those LucasArts adventure games from the early ’90s,” he told me via email, “are more like reading a book, you’re puzzling your way through an epic story. But with the rise of 3D graphics and personal shooters in the mid-’90s, that genre sadly died out.”

“Musically games from that era were completely different too,” he continues. “They had to play the score via the built-in synth inside the computer: the trusty Soundblaster OPL3 chip [the standard sound card for late-’80s / early-’90s PCs], or the SID inside a Commodore C64. When CDs came out it all turned into cheesy orchestras recorded onto ultra-clean CD. The computer didn’t sound like a ‘computer’ anymore.”

Jan met the other half of Jahtari, Christoph (aka Rootah), while working on a construction site in Leipzig in the early-’90s. He spotted him while on a lunch break, idling flicking through the Berlin-based electronic music magazine De:bug, and they got chatting. “Turns out he’s a vinyl fanatic, DJ, and expert on Detroit techno,” Jan recalls. “That opened a whole new world. Christoph went to [legendary Berlin record shop] Hardwax a lot where we eventually got hooked on Rhythm & Sound, Wackies, etc. We both started producing riddims at the same time and it went from there.”

It was a chance encounter with Jan and Christoph’s Jahtari imprint that introduced the scene to Mathias Østrem & Didrik Marø (aka Tiny Tias & Slåbrock) of Norwegian laptop reggae duo Helgeland 8-Bit Squad. An old flatmate showed Mathias some Pupajim, introducing it as “these crazy guys who use Nintendo sounds and make reggae music.” He was hooked. “Both me and Didrik became fans of the sound, the style, the creativeness, and I guess the imagery – we both grew up playing 8-bit and 16-bit games on the NES and SNES. [By] the time we started making Helgeland 8-Bit Squad productions together, the digital reggae scene had become the main thing we were listening to when hanging out together.” 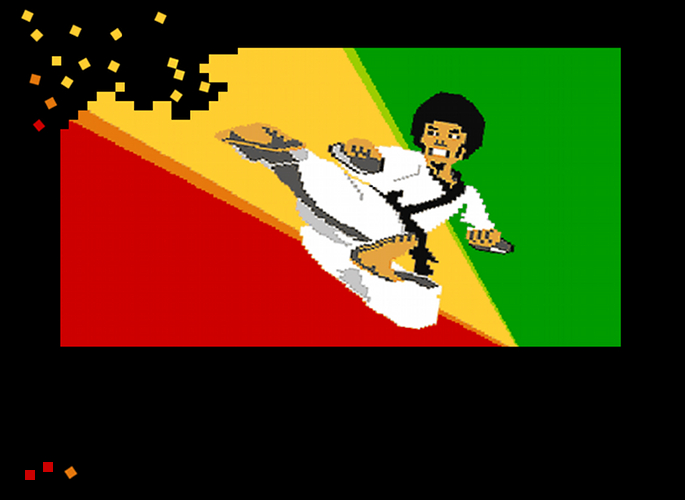 In Scandinavia, reggae – of all sorts – has actually never been more popular than it is now, Mathias tells me. He puts the recent surge of interest in the 8-bit sound down to the simple fact that a generation of kids who grew up playing games in the ’80s and ’90s have now grown up “and started making their mark on music – and incorporating the love for the early VGM music.”

That certainly tallies with Nicolas Nova’s own experience. In his early teens, the author had mostly been into black metal until a friend introduced him to two records that would change his life: the first was by Adrian Sherwood’s Dub Syndicate, the second was one of the more dubbed out collaborations between John Zorn and Bill Laswell. “So there was the connection, and progressively I looked into the whole history of reggae music.”

At the same time he was also feverishly playing 8-bit console games. “I still do,” he tells me, “with emulators and things.” In fact, Nova’s previous book was about the history and design of game controllers. “So I grew up with these parallel cultures, games and music, but they were always disconnected.” Only now, looking back, does he notice the upbeat licks in Super Marioland and other classics from the day. “It probably prepared the way I listened to music afterwards,” he says.

But for Nova, 8-bit reggae is not just another case of ‘retromania’. He sees in the sound a glimpse of something new and exciting, “a miniature sociological laboratory,” as he puts it in the book, or, quoting William Gibson’s Idoru novel, “the testbed of our futurity.”

“There’s ‘something more’” Nova insists, “that has bubbled up in these non-Irie places. The structure of the tracks, the awkward coherence between the sound and the visuals, the presence of glitches that could only happen with certain digital technologies, the way loops blend with other instruments gave the results originality.” He calls this process “machine creolization”, a kind of cultural hybridization in which algorithms and other virtual presences play a role as crucial as the humans that manipulate them.

It’s this side of the 8-bit reggae story that relates to Nova’s work with the Near Future Laboratory, a kind of independent “research bureau” concerned with design fiction and the ethnographies of digital culture. His next book is planned to be about what he calls “algorithmic culture”, something Nova thinks is “part of the same process” of “machine creolization”. He tells me how he’s interested in the way “a machine can generate new cultural forms” and I suggest that perhaps there’s a sense in which 8-bit reggae almost seems like a musical genre that could have been generated automatically, by some AI bot like William Gibson’s Wintermute, capable of synthesizing the Zion Dub of the rastas living on a near-earth orbital satellite in Neuromancer.

But as Mathias from the Helgeland 8-Bit Squad points out to me, the machine creolization of reggae is much older than the laptop dub he makes with his friend Didrik and Nova writes about in his book. It goes at least as far back as the day in 1984, when Neuromancer had just been published, and Wayne Smith walked into Prince Jammy’s studio with a beat he’d found on a friend’s Casio MT-40. “Which is almost more of a toy keyboard than a synthesizer meant for performing or big pop productions,” Mathias says. “Limitation in technology is not necessarily a limitation in creativity.”

Only after starting to make music with a Gameboy I could fully appreciate the extremely high level of skill in that tune. Groove, bass sound, the crazy complex arrangement and details in there. It’s really hard to achieve with the 4 tracks and limited interface you have. Sounds devastating on a sound system.

Jim is one of the very few truly outstanding producers and singers in Reggae today. His tunes are always proper songs with lyrics and a voice you won’t forget. He is extremely minimal and stripped down, making his tracks highly effective – that’s very hard to do. That particular track is from the last Standhigh Patrol LP, the offbeat skank in there is not a chord as usual but only one kind of metallic sound – boing. It simply shouldn’t work, but it does and totally kills it on a sound.

I wouldn’t name any of our own records, but this one is a true 8-bit reggae tune. Based on a Commodore demo by Daniel Johanson from the early 90s, each sound comes from the C64. It’s very ruff and has that crazy raw energy that nothing else can reproduce. The vocals fit like a glove and that kinda metal solo at the end is genius. That one was a lucky shot.