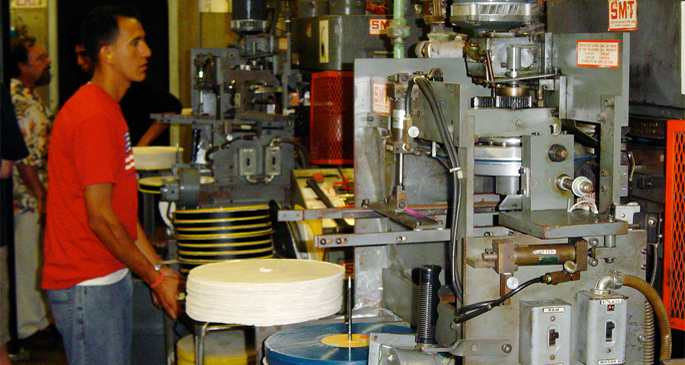 The resurgence of vinyl has left the 15-or-so pressing plants still operating in the US facing daily challenges to keep up with demand.

Industry data has revealed that almost 8 million vinyl records were sold in the United States this year, up 49% from the same time period last year. The mini-renaissance of vinyl in the US has left vinyl suppliers and manufacturers struggling to keep up with the demand from consumers.

One Thai-based company, Thai Plastic & Chemicals (TPC), supplies as much of 90% of the raw polyvinyl chloride compound used to manufacture vinyl records. The US-based arm of TPC operates out of a three-person shop in Long Beach, California.

Jack Cicerello, TPC manager for North America, says that after his former company, Keyser Century, closed down in the mid-2000s, there were no more suppliers of raw vinyl left in the US.

The TPC company enlisted Cicerello to expand its presence in the US, with Ciccerello and his colleagues launching a side business of transporting Thai-made raw vinyl to American pressing plants.

But this method means that things can easily go wrong as the demand for raw materials increases. In October, a truck transporting raw vinyl to Quality Record Pressings in Salina, Kansas, broke down right as the plant was stepping up production for Black Friday. “We almost ran out of vinyl,” said Gary Salstrom, QRP’s general manager.

Len Horowitz, 62, is one of only a few people in the US that can fix the sensitive components involved in record mastering. After one American mastering firm’s cutting lathe broke down in September, it took weeks to come back online.

“It’s one thing to be short presses, or short capacity,” Mr. Horowitz says. “If you can’t cut anything, everything stops—a real panic begins.”

Ryan Raffaelli, an assistant professor at Harvard Business School who studies what he calls “technology re-emergence,” is unsure whether vinyl records will be able to fully re-emerge from the doldrums.

“The question is whether there’s enough demand for vinyl to make this jump. And it’s too soon to tell,” Mr. Raffaelli said. [via MSN]