Thundering out of the PA is a single kick drum, scoured with nauseating waves of distortion, and the odd burst of anguished screaming. This is peak time in Berlin, Helena Hauff style. The Hamburg DJ is obviously enjoying herself by this point, tossing her head back imperiously as the track reaches its climax. (She’ll later tell me that she drank way too much that night, and made herself ill afterwards.) It’s been a couple of years now since Hauff began to gain attention beyond her native city, and whatever it was that people saw in her then, she still has it in spades.

As a producer, though, Hauff’s rise has been less meteoric. She debuted with an EP on Werkdiscs back in 2013, whose three tracks of grinding analogue techno had the intensity, but not quite the gruesome flair, of Hauff’s DJing. Since then, records for the likes of Lux_Rec and Bunker sublabel Panzerkreuz have become gradually more ambitious. Her latest, a tape for Texan label Handmade Birds (no relation to Hauff’s Golden Pudel night, Birds and Other Instruments) might be her most compelling yet. The 50-odd minutes span Hauff’s musical universe, from gurning electro-techno to krautish zone-outs and scuzzy feedback interludes. It’s tempting to consider it Hauff’s debut album, but she views these tracks – mostly forgotten sketches and offcuts from her brief recording career – as more of a compilation (or, as the title has it, simply A Tape).

In fact, Hauff’s debut album proper is currently in the pipeline, as is another EP for Werkdiscs. In the meantime, I caught up with her a few days after her Berlin gig to pick up a few track IDs and discover why she wants to “destroy” society. 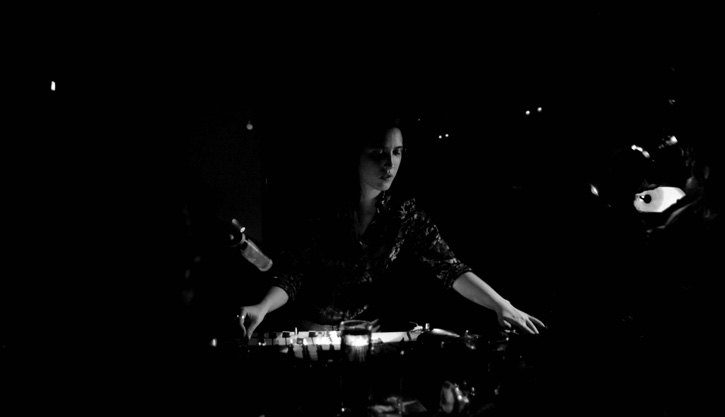 “Getting up very late and DJing and drinking and hanging out is maybe a little bit more fun than sitting in a laboratory.”

You played a track about 20 minutes from the end of your set on Friday – it was pretty much just a distorted kickdrum and a guy screaming. Can you remember what it was?

That was Club Moral from Belgium, a band from the ‘80s, and it’s called ‘Nazis of the Night’. It’s kind of an unofficial repress with a different version.

That’s quite a title.

It’s a very, very weird track. They were more like an art group, they did performances and stuff. Really radical.

You play in a lot of different settings. Are there scenarios where you just don’t feel like you can push things that far?

Sometimes I don’t want to go there. Sometimes it doesn’t feel like it’s a good set for the place or the atmosphere. Whereas at other times I don’t want to play too straight because it feels a bit inappropriate. Crowds are so different anyway. Some crowds are not that energetic, and they don’t seem to show their emotions as much as others do. And you’re like, ‘Oh god, I played a horrible set, they really didn’t like it’, and then afterwards people come to me and say, ‘Oh that was amazing, we loved it so much’.

But I guess that wouldn’t be the kind of ‘unexpected’ that they wanted.

Yeah. But normally I play at places where I have the feeling that, okay, the people booked me for the right reasons, they know their crowd. So I can basically do whatever I want to do. And I think most of the people that know my name are open-minded enough. And then you play the odd big festival where you think, ‘What am I doing here?’

Are you from Hamburg originally?

Have you ever lived anywhere else?

I lived in a very small town called Braunschweig. I studied there for a year and then I left again because I hated it.

What did you study?

First I studied fine art and then I started to study physics and systematic music science.

There’s historical music science and then there is systematic music science. In systematic music science it’s not so much about composers and notation. It’s more the mathematical aspects of music. How people perceive music, what it does to your brain, how a synthesiser is built, stuff like that. So it’s kind of related to physics – I was always into physics, so I wanted to study that. And then I realised that I just don’t like universities. And I actually want to destroy society, and that studying and becoming something that actually works for society isn’t really good. So I thought I’d become a DJ. And that doesn’t make any sense, but that’s basically it [laughs]. I was a bit lazy as well, and I thought getting up very late and DJing and drinking and hanging out is maybe a little bit more fun than sitting in a laboratory.

The stuff you learnt on the music course, do you still make use of it?

No, not at all. As I say, I was interested in physicsso I thought, ‘I’m into music, so maybe [systematic music science] is interesting, it combines those two things.’ But I realised that they’re actually two completely different things to me. I understand the theory but for me it’s not interesting. I’ve got more of a punk approach to music – just do it and get it out there. All the rest doesn’t really matter to me. It’s good to know your synthesisers and how you can work with them, but you don’t have to study music science to do that. You have to just make music.

Let’s talk about the tape. It’s a lot of music. Would you describe it as an album?

It’s technically speaking an album, but I don’t see it as an album. The label, Handmade Birds, emailed me about half a year ago and said, ‘We love your stuff, do you want to contribute to the label?’ Then I found an old tape and a harddrive with old recordings on it. And I was listening back to this stuff and thinking, ‘It’s actually not that bad, it’d be cool to do something with it.’ I thought putting it out on tape could be the perfect way to get that old music out.

How long ago are we talking?

Oh, not long. I mean I started producing music maybe three, four years ago. Something like that. But when I made the stuff I didn’t think ‘Okay, that’s my album.’ It’s more like sketches and some songs – kind of a compilation of what was left on my computer and in my room.

Does it predate the Werkdiscs EP?

Half of it I would say is before the Werkdiscs EP, yeah.

So this is why it’s called A Tape, because it really is just a tape – not an album.

Yeah. I didn’t want to put something onto it that it wasn’t. And I’m working on an album. I did all the recordings already and it’s hopefully soon going to come out. So that is my first real album.

You mentioned earlier that you’re not that keen on the way society operates right now. The musical organisations you’re involved with have a certain political charge: the Pudel started life as a squat, and Bunker Records came out of this politicised punk and squatter scene. You’ve also cited bands like DAF as being important to you. To what extent do you look for a political aspect in music?

I still don’t know if the kind of music that I play, that kind of techno in general, is more political or not political. It depends on where you play it. There are very few political lyrics, so when people say ‘techno is very apolitical’, I kind of get that. But then when you’re at the Bunker Records squat and you have a party there… The music itself is not political, and I don’t want it to be political either, but you are the person that you are, and maybe that transfers sometimes.

Are you someone who feels like you ought to be doing something, or in some way engaged with trying to change things?

Oh, that is such a difficult question. I don’t think I can change things – me, myself. I just think you shouldn’t stop reading about things, talking about things. As soon as you stop it’s over. You don’t have to be in a political party [laughs], you know? But just don’t stop thinking about what’s right and wrong, what you think is a good society.

In Germany recently, the rise of Pegida and the anti-Pegida demonstrations that took place is maybe an example of a small way that people could make a difference. Do you follow that sort of thing?

I find it more interesting to read philosophical books about stuff than reading the newspaper. I do read the newspaper, but it makes me angry, so it’s a bit pointless. And there’s greater ideas than the stuff you can read about in the news. I think it’s really important to keep talking about those ideas and thinking about them. I don’t know what else you can do, but that’s a start, to not stop thinking. Whatever that means.

You’re suggesting that there’s no political message in your own music, but, for instance, you started this label and called it Return To Disorder. What were you trying to say there?

There was an art movement after the First World War called Return To Order. They were a very conservative art movement, they basically wanted to go back to having nice pictures of trees and stuff [laughs]. I did the record for Bunker last year, it was 2014, so it was 100 years after the First World War started. I wanted to find a name for the record that referred to that somehow, so I thought, ‘Okay, I’m going to start an art movement that’s called Return To Disorder’. So that’s where the name comes from.

It fits on different levels – I’m not a very well-organised person. I got the first release pressed about half a year ago and they pressed it on the wrong speed [laughs]. And they’ve gone bust now. So it’s completely a return to disorder. Maybe I should’ve given it a different name – maybe it would’ve been easier.