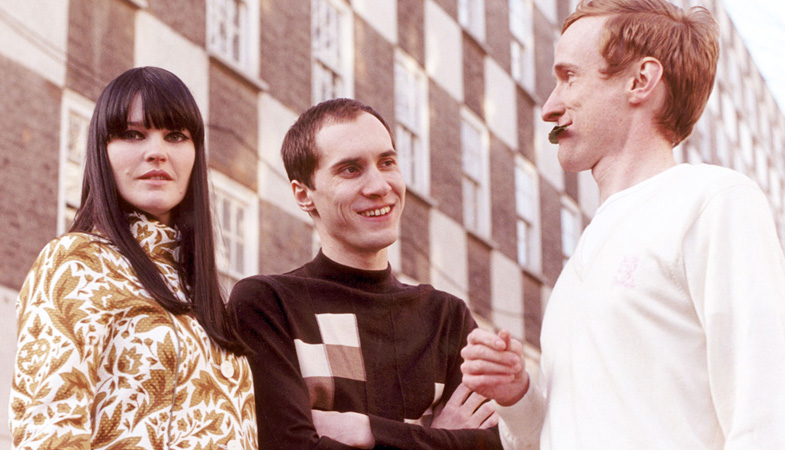 Disc One assembles a number of solo piano recordings by Fricke, recorded at various points between 1972 and 1989, and five of which are seeing release for the first time. Popol Vuh’s discography is famously wide-reaching, encompassing everything from astral jazz to proto-ambient, but Kailash shows that Fricke was constantly writing for solo piano. The second disc collects Fricke’s score for his self-directed 1995 Tibet documentary Kailash (also included). Ryuichi Sakamoto enthusiasts will dig the former; anyone with a New Age itch to scratch will enjoy the latter. Popol Vuh are very much a completist’s band, but Kailash isn’t just for Krautspods – both sides are, in different ways, open-hearted and affecting.

Another off-road recommendation for spiritual travellers: Semool’s Essais, just out on Futura, is an intermittently superb collection of early 1970s freakout music from France.

Spotters might have encountered Ciullini on Strut’s compelling 2013 Mutazione: Italian Electronic and New Wave Underground 1980-1988 compilation. Based out of Florence, Ciullini belonged to the TRAX collective (not that one) – a collection of pan-European musicians and artists trading tapes and artwork throughout the 1980s.

Ecstatic’s compilation bundles Ciullini’s 1983 Domestic Exile cassette with a smattering of tracks produced between 1982 and 1986. A photographer as well as a musician, Ciullini styles these works as “sonic polaroids”, but they’re more like pointillist dot-paintings, made up of stannic hits and fingerprick percussion programming. The set-up is spartan – a Roland TB-303, Boss DR-55, Roland TR-606 and occasional touches of electric guitar – but Ciullini’s sound has a prickly character. By some charming historical felicitity, some of this sounds achingly contemporary – ‘Flowers In The Water’ could have quite happily cropped on Gobstopper’s 2015 release sheet. I’m reminded of Stefan Jaworzyn’s contemporaneous Drained of Connotation, or, as more than one vendor has noted, Chris Carter’s 1980 classic The Space Between – both robust compliments.

8. The Automatics Group
Summer Mix
(The Death of Rave)

2012 was the year of the rave carve-up: Lee Gamble’s Diversions 1994-1996 made ambient magic out of fragments of classic jungle records, playing like Rufige Kru scratched onto wax cylinder; Lorenzo Senni’s Quantum Jelly stripped big-room trance for parts; and EVOL’s still-essential FACT Mix 330 – which mashed together 105 examples of the ‘hoover sound’ into a delirious 50-minute art piece – thrilled and appalled in equal measure. Credit to The Death of Rave for rescuing a personal favourite from the crop – sound artist Theo Burt’s Summer Mix, originally issued on Entr’acte.

Released just before EDM’s imperial phase, Summer Mix is a mixtape of fresher-friendly trance pap, from Sash! through Deadmau5. Burt subjects the tracks to a “discrete Fourier transform” – a process too niggly to summarise here, but one that essentially results in half the audio information being dumped. When applied to highly repetitive music (in this instance, garish four-to-the-floor), the process results in a phantasmagoric ghost of the original track, turning these beefy club hits into frail, taciturn ambient pieces. Snares become discreet clicks, breakdowns lose their punch, and rush-inducing synth swells are reconfigured as wafting white noise. It’s a fascinating trick: one that makes Paul Van Dyk sound like GAS, or Tiesto twinkle like Oval.

Unlike comparable Japanese dance imprints, Soichi Terada’s Far East Recording label crossed over, with the label’s output getting play in the US and the UK in the early 1990s. Rush Hour’s collection compiles Far East Productions (mostly from Terada himself) released in the early ’90s.

Terada was evidently less interested in ripping up the rulebook than scribbling in the margins – but anyone with an ear for Virgo or (more pertinently) Larry Heard. The tracklist – arranged by superb deep house producer Hunee – rarely runs out of puff, and the highlights flink and glimmer: the fairy-lit jack of ‘Voice From Beyond’ is delightful, and ‘Low Tension’ is so slinky it might as well come bundled with a complimentary LBD. Terada’s tracks are also complemented by a few efforts from contemporary artists, including Shinichiro Yokota and Terada and Nami Shimada (whose ‘Sun Showered’ is a highlight). It’s Rush Hour’s second reissue effort in as many months: Vincent Floyd’s Moonlight Fantasy is an enjoyable, if less distinguished, alternative.

Back in 2013, Into The Light put out an enjoyable collection of Greek electronic music, Into The Light: A Journey into Greek Electronic Music, Classics and Rarities. Amidst the synth cascades and fiddly electronic miniatures, Lena Platonos stood out like a malformed thumb – a creepy diva channeling NDW and the spirit of the first-gen coldwavers.

Released in 1985, Gallop is Platonos’ second solo album – written, produced and sung by the Athens native, and hyped by Dark Entries as a record that “paved the way for Greek electronica in the 1990s”. Heaven knows whether that’s a fair claim or not, but Gallop is undoubtedly a fascinating record, full of ideas and heavy on the TR-808. Platonos’ work encompasses pranging electro-funk (‘What’s New Pussy Cat?’), mechanical grind (‘Markos’) and lullabies to paralyse (‘Witches’), and the record is threaded together by a breathy spoken word narrative, delivered in Platonos’ Greek purr. It’s one of the strangest – and best – things I’ve heard all month. Dark Entries’ new version has been remastered from the original tapes with supplementary liner notes from Platonos and friends.

Unlike some contemporaries, who spew out ‘forgotten’ (read: forgettable) private press synth records at a rate of knots, Spectrum Spools have applied their reissue smarts judiciously: highlights include Robert Turman’s featherlight 1981 LP Flux, or Donato Dozzy and Nuel’s shimmering The Aquaplano Sessions, one of our favourite reissues of last year.

Borden is a bona fide Synth Elder: leader of seminal synth ensemble Mother Mallard’s Portable Masterpiece Company; an early associate of Bob Moog; and an undersung investigator of the instrument’s possibilities (Spectrum Spools go so far as to anoint him the “missing link in American Minimalism”). First released in 1981 on Dutch label Red Records, Music for Amplified Keyboard Instruments is a fine calling-card, and one that could easily pass as an early work by Oneohtrix Point Never or Emeralds

The bulk of the record is given over to two extracts from The Continuing Story of Counterpoint – both offering shimmering, haptic synth-playing that frequently flirts with the sublime. The other two tracks are shorter:‘Esty Point’ has a jazzy swing, whereas ‘Enfield in Winter’ is heartsore and weary. Spectrum Spools’ reissue marks its first return to vinyl in over three decades.

As someone with a massive soft-spot for Sensational and Spectre’s 2009 LP Acid & Bass, this PAN release has proved both a cute surprise and a welcome history lesson. Spectre is Brooklyn beatmaker Skiz Fernando Jr. – founder of experimental label WordSound (alumni: The Bug and Prince Paul) and regular beatmaker for Sensational (whose non-appearance on this website’s 100 greatest indie hip-hop albums list is, baldly, a travesty). His work is often lumped in with the short-lived “Illbient” movement, one of those terms that was flung around at the time and looks a shade silly in retrospect. But Ruff Kutz certainly exemplifies the Illbient sensibility, creolising head-nod, reggae, sci-fi gloom and world musics into something creepy and indeterminate.

First released as a limited cassette in 1998, Ruff Kutz blends odds’n’sods produced over the previous half-decade – alt. mixes; productions for Sensational; unreleased material from the likes of Techno Animal and Bill Laswell; and scattered instrumentals. Unlike, say, Odd Nosdam’s rich, psychedelic tapestries, these are sparse and weatherbeaten compositions – the sound of newspapers gusting through dilapidated tenement yards. In terms of pace and space, it’s closer to Lee ‘Scratch’ Perry (Blackboard Jungle Dub) than conventional rap – skeletal, and only loosely tethered to reality, with beats that clank like Jacob Marley’s chains. 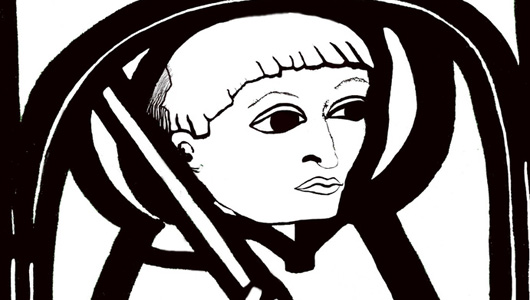 If that sounds a shade austere, the album’s got a curious USP: the album was recorded outside of worship hours, meaning that Dwyer had to share the space with the church’s cleaners, hence the title. These unwitting collaborators are audible throughout the whole record: organ drones are counterpointed by the whirr of hoovers, and the playing is occasionally interrupted by questions or nagging interventions from the cleaning ladies (“Don’t hang on to one note for too long!”)

The results are part field recording, part devotional tract, part ambient brainbath; in its extended form, Music For Church Cleaners one of the most arresting records I’ve heard all year. MIE’s limited edition marks the record’s first outing onto vinyl, and comes wrapped in gorgeous hand drawn artwork. And for another deep listen from 2011, make time for Lawrence English’s shimmering drone LP The Peregrine, reissued on Room40 this month.

Not in the mood for Automatics Group’s trance autopsies? Bummed by Spectre’s scorched-earth boom-bap? Well, here’s this month’s ray of sunshine. Brian Shimkovitz’s blog-turned-label Awesome Tapes From Africa has long distinguished itself, with its best releases ranking amongst the best reissues of the decade thus far (case in point: Hailu Mergia’s immaculate Hailu Mergia and his Classical Instrument).

As it happens, the entire Awesome Tapes operation began with a post by Shimkovitz about Obaa Sima – a zero-profile cassette album of “frenetic leftfield rap madness” from Ghana-born rapper Ata Kak. Having sat on the record for almost a decade, Shimkovitz has finally tracked down the man responsible – itinerant percussionist Yaw Atta-Owusu – and secured the right to release (FACT recently ran a chunky investigation into the record’s provenance).

Recorded in 1994, Obaa Sima is loosely indebted to Ghanian hiplife – an upbeat fusion of highlife, hip-hop and electro. It’s basically ebullience incarnate, drawing merrily on funk, rap, soul and house. For an illustrative example, try ‘Daa Nyinaa’ – a kiddie-voiced house jam with lashings of disco spangle, a few Lionel Richie nods and a breathless rap break for good measure. If that all sounds infuriatingly chipper, there’s a real outsider quality at play too, reminiscent of Mix-0-Rap’s nightmare go-go, or fringe weirdos like Superstar and Star.

This column has a tendency towards buried treasures and neglected gems, as opposed to roll-outs of a band’s back catalogue – after all, what does a lush bundle of Led Zep albums add to the sum total of human happiness? But rules have exceptions, and, as in so many cases, Broadcast are the exception.

Taken from tip to toe, the Birmingham band have one of the strongest and most developed discographies of any British band from the last two decades. Although none of these records are hard to hear, they’ve been (mostly) out of print for some time. Warp’s rollout includes all four of the band’s studio albums: 2000’s The Noise Made by People – a luxuriant, wonderfully immersive set of psych-pop with radiophonic flourishes; 2003’s kaleidoscopic fun-ride Haha Sound; the serrated electro-pop of 2005’s Tender Buttons; and 2009’s collage effort Broadcast and The Focus Group Investigate Witch Cults of the Radio Age. Particularly welcome is a second spin for Work And Non Work, the band’s 1997 singles compilation, and 2006’s The Future Crayon package is also back on shelves.

On a similarly omnivorous tip, special mention also goes to Laika’s 1995 LP Silver Apples of the Moon – a set of cosmic exotica that almost bagged a low appearance in FACT’s 100 Best Albums of the 1990s list, recently reissued on Medical Records.