Based across several Soho locations in its lifespan, Deal Real wasn’t just a record store – it was a key hub for London’s hip-hop community.

Famed for its in-store events, which witnessed intimate performances from both the UK’s future stars (Example, Kate Tempest, Amy Winehouse) and the best of the US (Kanye West, GZA, Mos Def and many more performed there during trips to London), the store closed down in 2007. On Saturday April 18, however, it will re-open as a temporary pop-up on 14 Newburgh Street, Carnaby for Record Store Day, with workshops, in-store performances, record signings and broadcast of archive footage all planned.

To toast Deal Real’s return – even if it is for one day only – we asked rapper and comedian Doc Brown, an integral part of the Deal Real community from the start, Example, a regular at the store’s open mics, and the younger Tinchy Stryder, a grime MC who grew up with Deal Real in his sights, for their memories of the store.

Example: One of my best mates from college told me about it. I was saying to him it’s a shame there’s no weekly open mic events – that weren’t late club nights – where people can just go and hang, chat, swap tips on the industry and discover new music. He told me about Deal Real and we went down to investigate.

Doc Brown: I’m involved enough to remember the old Deal Real which was deeper into Soho, on D’Arblay Street I think, so I was around from pre-Deal Real. I knew the owners of the “new” incarnation of the store before they set up in Carnaby – I can’t remember who invited me to see the space first, but I do remember standing in there for the first time and all of us thinking “something else has to happen here”. As I recall, the idea for in-store sessions came pretty early – maybe the same time as deciding what they were gonna sell!

Tinchy Stryder: I first heard about Deal Real through my older brother. He was a DJ so I guess he must gave got some of his records from Deal Real.

Doc Brown: We were already part of a large hip-hop family nationwide so it was always gonna jump off from the first event. It was free, it was run by people who genuinely loved the artform and it was opposite a pub. We were already winning! Those first few sessions – I recall Estelle doing a very early one – they were the essence of hip-hop. Just a bunch of kids indulging in the thing they loved, with no commercial undertones, no smartphones, no industry, no racial or class divides, just real people from all over. That simply grew every time we put on an event.

Example: I remember walking up the alley way to the shop and there was a small crowd outside the shop all singing and shouting, some were jumping. It was almost as if Stevie Wonder could’ve been inside the shop and only these guys knew about it! But when I got closer I realised it was Doc Brown and Lowkey performing and the shop was packed and bouncing. I knew instantly it was a unique place.

Tinchy Stryder: I was mad young so I was just happy to be in a record shop that felt so cool and further out than where me and my mates would usually travel to. I didn’t realise it was such a special place for a certain community, or the culture, until I got to perform there a few years later. I didn’t know what to expect when I first visited but that also added to it being a fun experience.

“It was always a place we wanted to be involved with and catch some of that magic from!”
Tinchy Stryder

Example: I didn’t pluck up the courage to actually grab the mic and perform until my fifth visit. I think on my 7th visit I did an instore and sold my first single ‘A Pointless Song’ on 12″. I went home with £75 and was over the moon! Haha. Deal Real had put me in touch with the PR company and the manufacturer who helped me with that release.

Doc Brown: [Deal Real’s community was] like a movie really. From Canibus perched on top of the counter performing ‘Second Round Knockout’ to Amy Winehouse airing out Island Records in front of everyone, from Skinnyman flying through the crowd pursued by police, to me freestyling with Mos Def, Mark Ronson, Will.I.Am, from Kanye kicking it with us to Slick Rick showing up with only three people in the crowd… It got very crazy very quickly but the essence was always there.

Example: It was like everyone was equal, and anyone could be a potential star. The belief in each other and in the power of music was rife. I don’t remember once someone looking down on me like “who is this guy? Why is he rapping? Why is he dressed like that?” It was all love. A free platform to promote yourself.

Tinchy Stryder: I was maybe a touch too young to catch the peak of that era. It was more something I’d see in magazines and hear about, and it was always a place we wanted to be involved with and catch some of that magic from!

Doc Brown: I remember Mos Def and Pharoahe Monch saying that hip-hop in that raw form that we were generating, it didn’t really exist for them in the States because it had become like a pro sport – a way of making a living, seeking millions even, and greed had overtaken. Long after the shop would shut on a Friday night there’d be 50 of us in a cipher on the corner, just for the hell of it. It’s easy to be romantic about it ‘cause that’s what it was, it’s no exaggeration. The footage we shot will bear the truth of that.

Example: Some of the advice I was given down there I still practice today – like if you want something done properly – do it yourself! I thought about that last year when I was directing a low budget self funded video myself – even though I’m signed to Sony you just gotta do stuff yourself sometimes

“If you want something done properly – do it yourself!”
Example

Doc Brown: [My defining memory of Deal Real] is the feeling of peace and safety. Everyone had their issues at home or on the street or wherever, myself included, but when we were in that shop there were no postcode wars, there was no poverty, no privelige, it was just beats, rhymes and a togetherness that sounds like it was on some cheesy shit but it wasn’t. It was just a moment in time when nothing was over analysed, everyone was just being. We came because when we were there, none of the other bullshit mattered. I looked forward to it every single time.

Tinchy Stryder: My defining memory of the shop to me would have to be actually getting to perform there for the 1st time. I remember performing a couple of tracks with Ruff Sqwad and my track ‘Not Like Me’, for some reason I feel like JME was there too but I might be making that up. I was proper happy, it was a good day.

Doc Brown: If I could sum up Deal Real in one word it would be unity.

Tinchy Stryder: I think it would take more than one, I couldn’t do that. It felt very authentic and credible in there for sure though, a place full of real music heads. 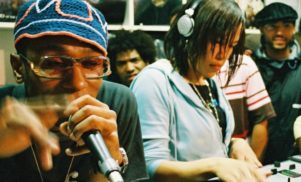 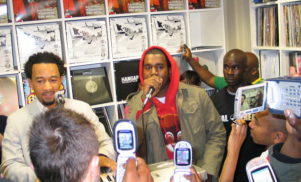