Renee Scroggins likened the art to vomit on a canvas.

Punk-funk trio ESG have launched a scathing attack on Fire Records, after a Record Store Day 12″ collecting some of their early material went on sale with what the band described as an “insulting” re-imagining of their self-titled debut EP from 1981.

ESG member Renee Scroggins took to Facebook yesterday to make her feelings clear, posting an image of the original, the “respectful” version on the 2000 compilation A South Bronx Story, and the “insulting” Moody EP, which features three tracks from their 1981 debut and an unreleased version of the title track. 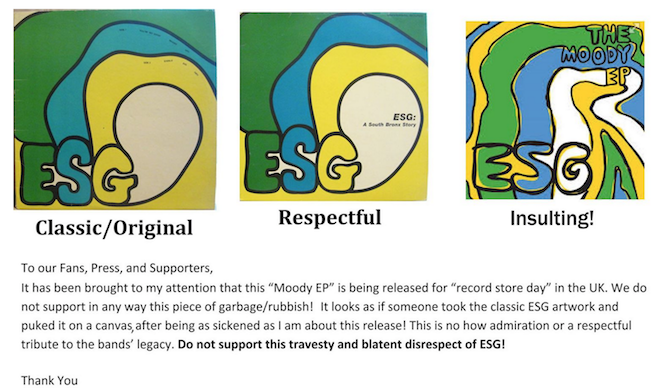 “It looks as if someone took the classic ESG artwork and puked it onto a canvas after being as sickened as I am about this release,” Scroggins said. Fans of the band also weighed in, with one describing it as looking like “a child with crayons imitating the original,” and several more questioning the release’s authenticity.

Fire Records director James Nicholls defended his position on Facebook, explaining that he though Scroggins had approved the art, saying it was “a mistake I apologised about 999 times for,” and that the other reissues had been “well received.”

Nicholls also suggested that Scroggins had taken issue with the art because of something that happened at a recent ESG show in London. “This all actually happened because I offered to do merch for her at the London show,” he explained “and give her the entire proceeds to sales of this record on the night, and she took that as treading on her turf, which I totally understand now… and she has made that point very strongly indeed.”

Regardless of what you think of the artwork, spare a thought for U2 fans who braved the Record Store Day queues on Saturday – some of their fans hoping for a Songs Of Innocence LP got a 1991 Tool EP instead. [via The Vinyl Factory]