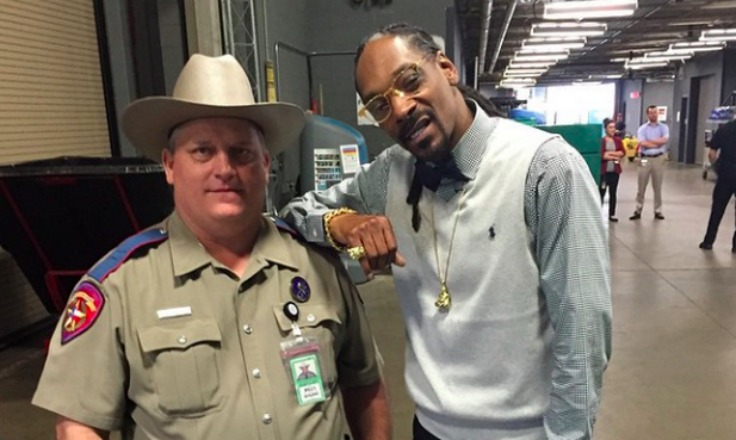 Snoop Dogg has been characterised – perhaps not unfairly – as a “dope-smoking cop hater” by a Texas law chief.

Steven McCraw, director of the state’s Department of Public Safety (DPS), made the comment in an email about a state trooper who has been reprimanded for having his photo taken with the rapper.

Snoop, who recently revealed plans to launch “Uber for weed”, asked Trooper Billy Spears to pose for a snap while the off-duty cop was working on security at SXSW to earn some extra cash. The rapper posted it Instagram with the caption, “Me n my deputy dogg”.

Spears got in trouble with his seniors because of Snoop’s drug convictions and was ordered to undergo counselling, but he has now filed a lawsuit against the DPS. His boss’s “cop hater” comment came to light when Spears’s lawyer obtained DPS emails through open-records laws.

“Apparently he would rather work the convention while on a week’s vacation to earn additional money rather than take an additional tour on the border [with Mexico],” McCraw wrote of Spears. “He must not understand that he was being lampooned by a dope-smoking cop hater, which reflects very poorly on the department.”

The emails also include one from a DPS supervisor pointing out that plenty of troopers have had their pictures taken with celebs while working at the Austin festival, mentioning Robert Duvall, Shaquille O’Neal, Cee Lo Green and Rob Zombie. [via Guardian/Billboard]