Update: Umunna has pulled out of the Labour leadership race. His full statement follows: 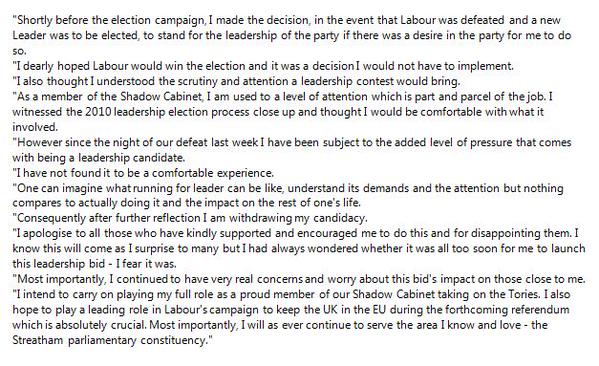 The Streatham MP used to be “strictly vinyl” back in the day.

The departure of Ed Miliband as leader of the Labour following the party’s catastrophic result in last week’s general election has left a role that needs to be filled, and today Streatham MP Chuka Umunna officially joined the leadership contest. In case you’re wondering what this has to do with FACT, well, the Shadow Business Secretary used to be a UK garage DJ and music journalist in his youth.

Umunna’s former life as a DJ certainly isn’t recent news, but it seems worth pointing out to those Labour Party members who’d rather not have to endure a leader who likes the music of Ellie Goulding, or a Prime Minister that counts Mumford & Sons and The Killers among his favourite artists.

He outlined his passion to The Independent back in 2011, saying that his DJing was “strictly vinyl,” and that he was into ragga, jungle, hip hop, soul, and then US house and UK garage in the mid-90s “before it became really big.” Expanding on his love of the genre for DJ Mag last month, he said that what appealed to him about it “was that there was no element of us seeking to mimic what people were doing in the US — it was a very British sound, and it just completely captured my imagination.”

“I first started writing about it on a freelance basis for Touch Magazine, which was the offshoot of Kiss FM,” he continued. “Then when I was at university, I bought some decks — they were very old skool decks, belt-driven.”

Umunna ran his own UK garage nights with friends when he was at university in Manchester, and was a fan of Sweet Female Attitude’s ‘Flowers”, MJ Cole and Karl ‘Tuff Enuff’ Brown. However, as he explains, he was more into the US side of the scene, and soon migrated to soulful US house, favouring records from Talkin Loud, Erick Morillo’s Subliminal Soul, Defected, and his favourite label, Soulfuric.

“I moved on, I felt it was a bit of a shame that everybody got greedy, and it got too aggressive, the whole garage scene, which is why I slightly fell out of love with it. We allowed the MCs to take over, and it went from being quite a kind of happy, uplifting vibe to something that was a bit more aggressive — that I didn’t like. People just wanted to make money too quick, and as it became more mainstream people were just selling out, I felt. A lot of the guys migrated to the UK soulful house scene, and that’s what I did,” said the man who was a solicitor in Blair’s boom years before he became an MP.

While Umunna doesn’t have much time to play out any more, he’s still engaged with nightclub culture. He attracted the ire of the Daily Mail in 2013 for comments made in 2006 on a social networking site bemoaning the lack of “decent” clubs in London, suggesting the West End establishments were “full of trash and C-list wannabes, while other places that should know better opt for the cheesy vibe.”

Though Umunna was branded a “champagne socialist” by Tory MP Chris Heaton-Harris for asking for tips as to “what’s hot right now” in Miami on the social network, he does claim to see the music industry as a vital part of the UK’s economy.

“There’s lots of opportunities, and we’ve got big challenges as a country cos we’ve got a big trade deficit and we’ve got to turn it around if the UK is to pay its way in the world,” Umunna told DJ Mag last month. “So we’ve got to think about what those industries are that deserve medals for British industry trading and creating more jobs in the UK, and the music industry is definitely one of them.”

If Umunna’s UK garage past isn’t enough to impress potential Labour Party voters, this video of him singing the Fresh Prince of Bel Air theme with Will Smith in a Brixton school in 2013 might swing it.