PC Music may have been 2014’s most talked-about label, but how does that carefully curated digital personality translate to the live sphere? FACT’s Walker Chambliss reports from PC Music’s biggest live show yet, last weekend’s Pop Cube in New York, with photography from Maxwell Schiano.

Last Friday night, at an art installation space called BRIC House in downtown Brooklyn, a white stretch Hummer limo pulled up outside the entrance to the building and opened its doors to a red carpet, where photographers flashed photos of the entourage streaming out of the vehicle.

A crowd of adoring fans stood in line, waiting to enter. Was this a high profile art opening? A celebrity-filled soiree? It was a little of both, actually: it was PC Music’s party for the premiere of “Pop Cube”, a Red Bull Music Academy-branded event which they describe as a “multimedia reality network”.

Anyone familiar enough with the PC Music (and the closely allied SOPHIE, who also performed at the event) archetype shouldn’t be surprised by a project of theirs being described with such high-concept pretentiousness, nor is their penchant for trolling mainstream pop and electronic music new. But the sheer breadth and commitment to their act on Friday was spectacular. Having dotted the US a few times over the last year, their members have taken to turning their performances into full on stage shows – SOPHIE’s sets with a drag queen behind the decks, QT’s infamous “performance” at Boiler Room LA – but for many in the crowd it was the first time seeing the full-on, demented vision of PC Music in its totality. This was meant to be PC Music’s American coming-out party. 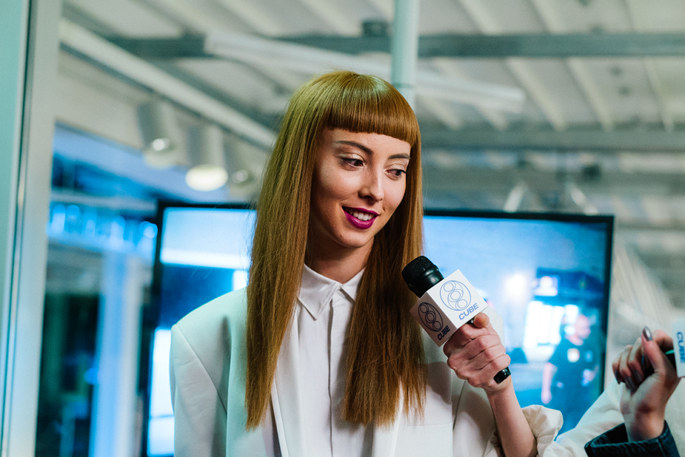 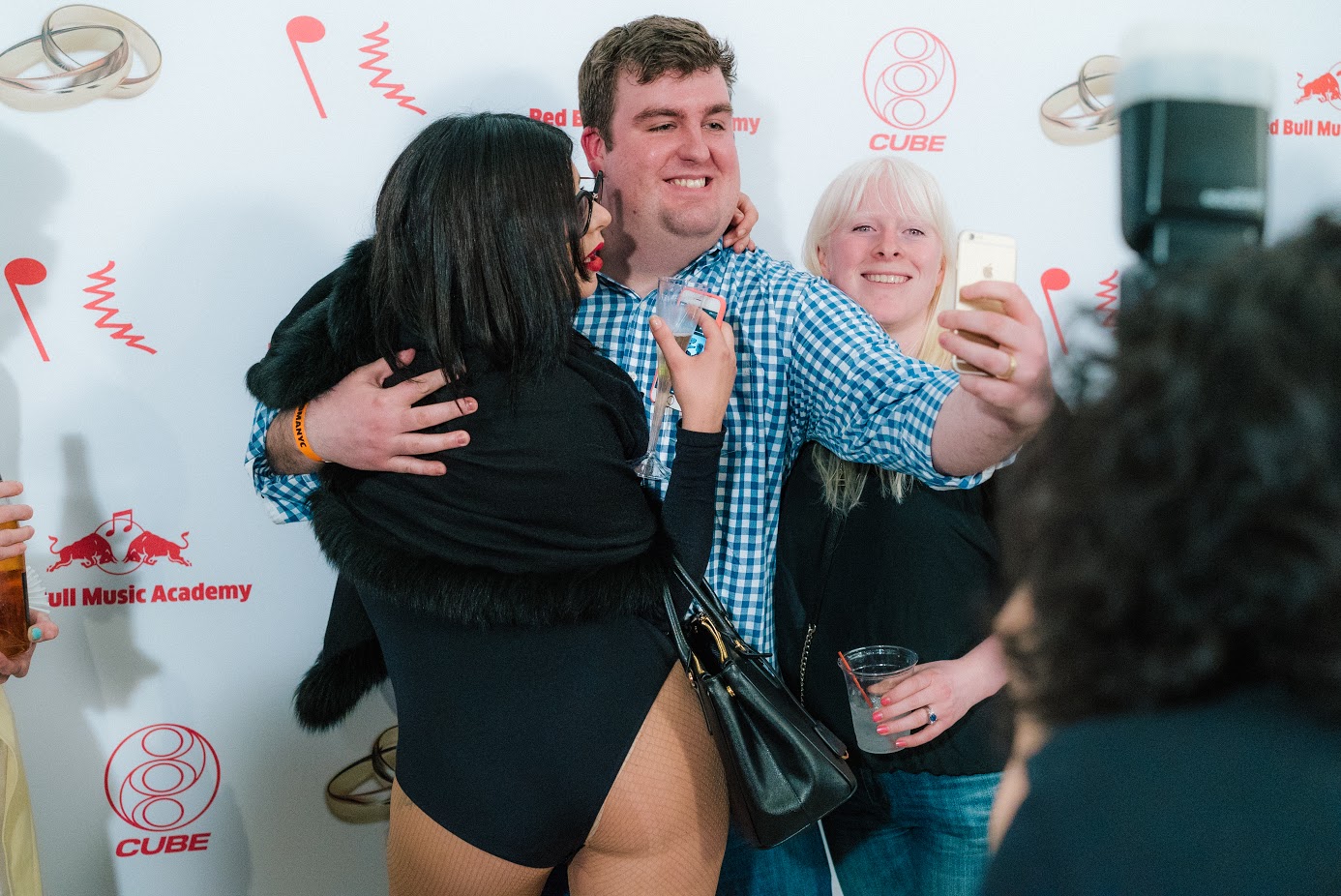 After exiting the limo one by one, the members made their way inside, being photographed by press made to mimic paparazzi (including FACT’s Maxwell Schiano), and then “interviewed” by fake celebrity news reporters. A. G. Cook and other members of the collective have talked, in high-minded and art-school informed ways, about the intersection of artistry and artifice in the current pop music climate, and this seemed to lead to an observation from the group that the photographs taken would probably mean more to the fans than the words written later about the show. Maxwell was separated from me early on in order to cover the entrance of the artists, while I was left to wait in line with everyone else in order to “be part of the event”, as the woman at the press check-in informed us.

The crowd, skewing mostly young, included members who had driven from far out of town to come see the event. The internet was on everyone’s mind, and everyone’s lips. One duo of young men spoke of not wanting to miss the next trend, as they were “too young for seapunk”. Another member of the crowd successfully predicted that Dev Hynes would be skating up to the event about a minute before he actually did; he had just read the dispatch on Twitter. For all of PC Music’s satirical poking fun at the overwhelming, up-to-the-second obsession with celebrity culture, they also seemed to sense that their popularity is innately tied to their fans’ own genuine interest in social media. Inside, we all lined up to take selfies in a green room with Hannah Diamond, QT, and GFOTY, and these were almost certainly shared instantly on Instagram and Twitter with more of a sense of enthusiasm than of irony. 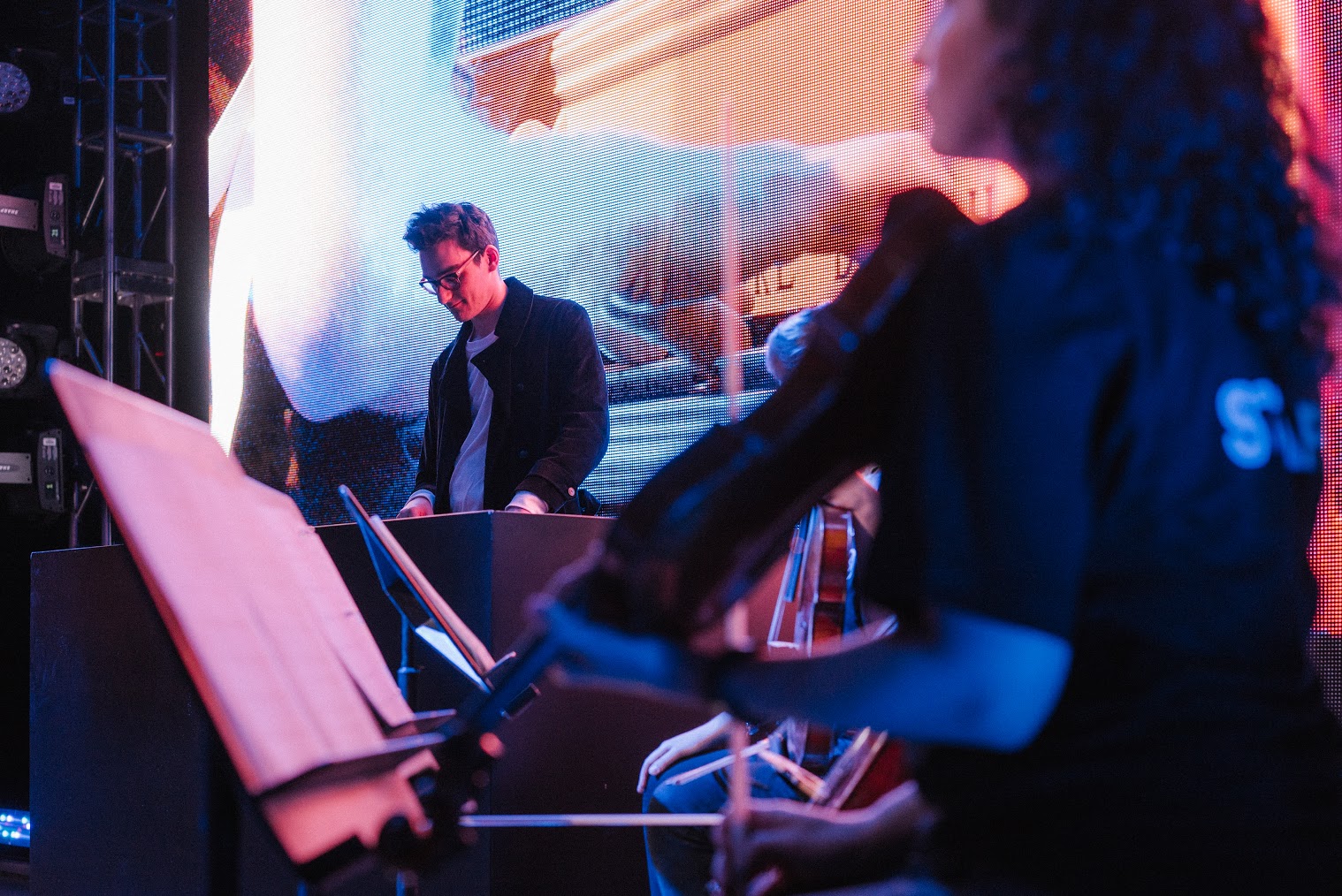 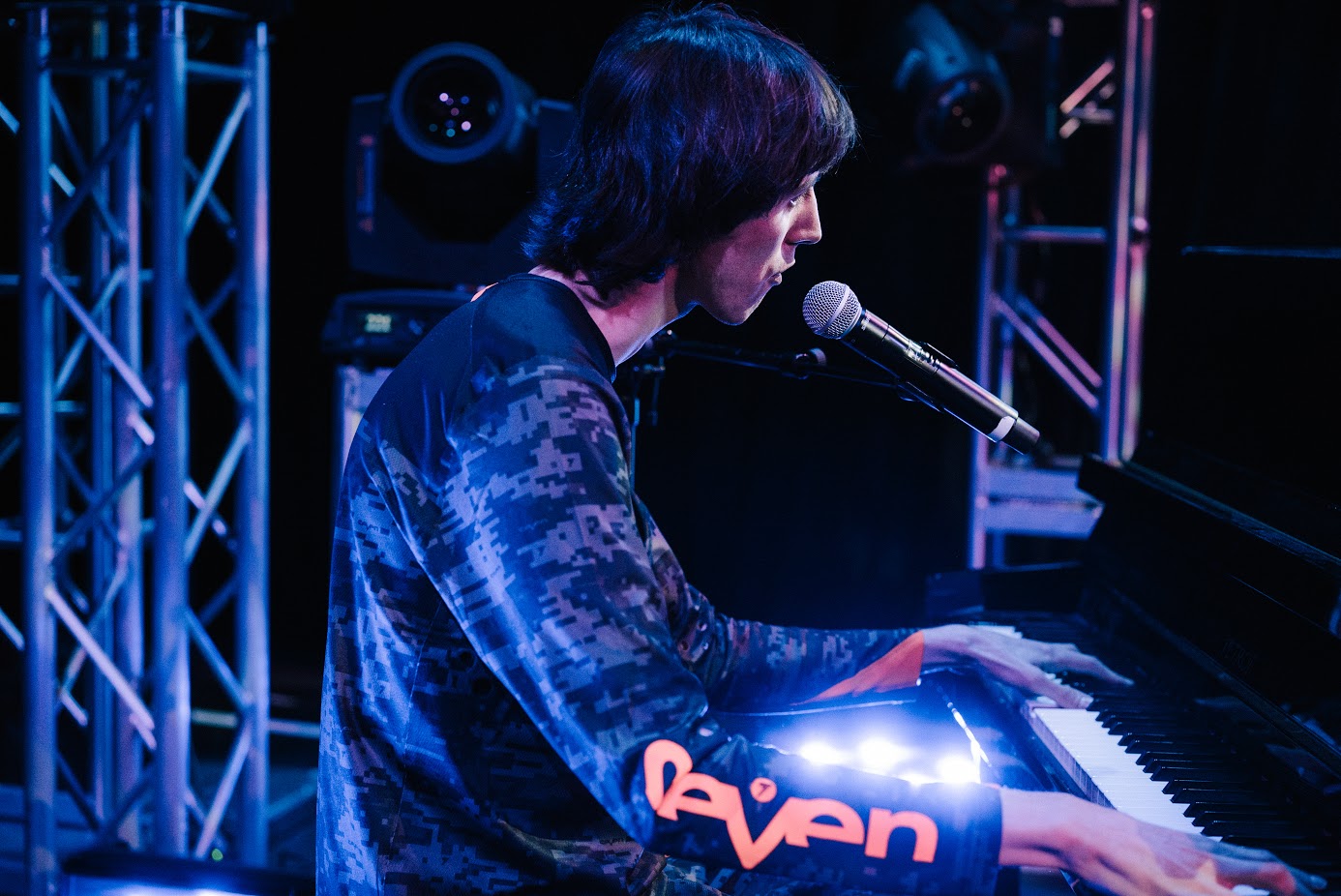 “For all the talk of art-school wankery, and all the spectacle, there is clearly a lot of truly subtle and cerebral artistry going on behind the scenes at PC Music.”

While PC Music is an ostensibly music-based collective, it quickly became apparent the music, while occasionally stunning and unique, was the least important part of the night. This was absolutely meant to function as an art performance piece, where the culture of music and celebrity was skewered, yet also celebrated. QT DJed from a van high above the crowd outside as everyone entered, while A. G. Cook and Danny L Harle, as Dux Content, DJed the large main room, where the aforementioned green room space was placed, while the crowd lined up patiently to take their photos with the stars of the night. There was a morning TV show-style set taking up space on the opposite side of the room, with set lights and a camera aligning the perimeter of the space; however it didn’t appear to be used for anything. At some point members of the audience realized this, and began trickling into the set, sitting at the desk and utilizing the space. However, most remained outside the fence provided by the lights, unsure of whether they were somehow violating a closed-off space.

After an hour or so, an automated message replaced the music, declaring that “the main concert area is now open, please move to the main concert area”. The crowd herded their way in to be greeted by a stage set-up consisting of a centered CDJ and mixer, flanked on one side by a grand piano and on the other by chairs meant for session musicians. A few minutes later, Danny L Harle appeared on stage with his musicians, all wearing RBMA Staff shirts. One man sat at the harpsichord, while three ladies appeared with violins and sat in the chairs. From here on, the “artifice” was clearly the show. 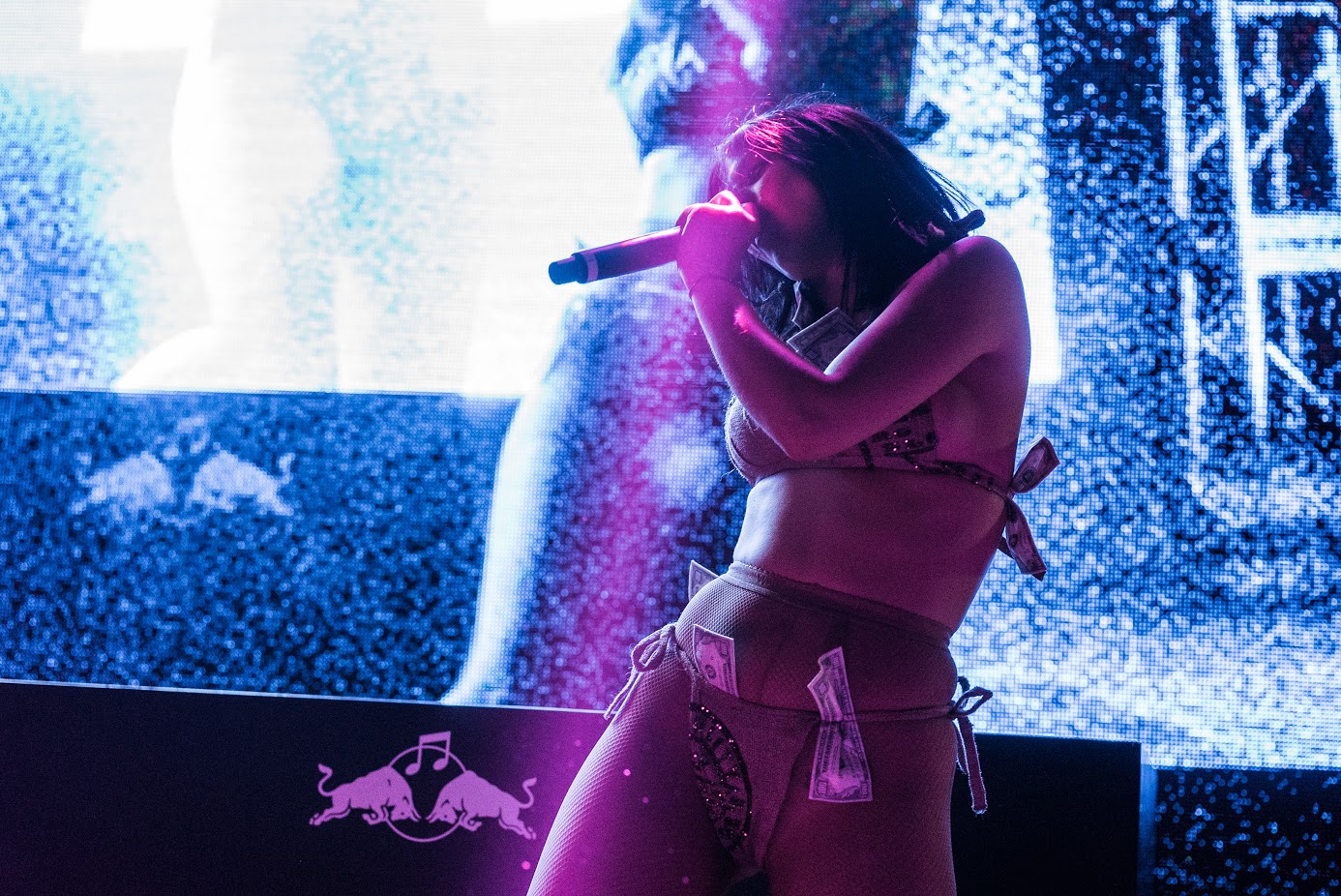 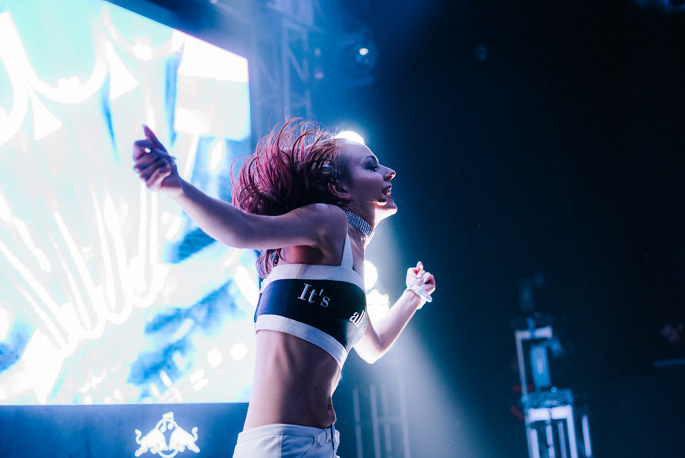 A back-and-forth drone/noise composition between the live instruments and Mr. Harle, which was televised closely on a projector behind the performers, revealed that for all the pantomiming and performance on the stage, the live musicians may not have been playing much at all.

PC Music has been suspected of playing prerecorded sets at shows in the past, and here they made little effort to hide that this was the case for nearly all the performers. At one point A. G. Cook sat at the piano to sing a ballad. He winked at the camera, and close ups on the keyboard seemed to show that the dramatic motions he was making had little bearing on the music. Hannah Diamond and QT engaged in “live performances” which were nothing more than choreographed stage shows, lipsynced (QT’s, of course, beginning with a 10-minute infomercial urging people to “Drink QT”). The final live performer, GFOTY, was the only one to obviously utilize live vocals, resulting in a raucous and caustic live performance clearly meant to skewer the likes of Miley Cyrus, Iggy Azalea, and others. She sneered into the mic half-rapped tracks while prancing about the stage in a fur coat and a thong bikini stuffed with $100 bills, as dancers shot confetti guns into the crowd. It was stupid, ridiculous, and annoying.

And of course, that was the point of the evening. As occasionally too on-the-nose the satire could become, as during the GFOTY set, at the kernel of why PC Music remains so interesting is their total commitment to their brand and their performance. While it was all meant to be grand and overwhelming, the music remains unlike anything else out there. SOPHIE, with the final set of the night, began with a noisy, electronic drone piece that remained bright and somehow poppy – these kinds of tunes, beat-oriented or ambient, dominated the night musically from the DJs – while Hannah Diamond and QT’s tracks remained undeniably catchy and fun. There is simply very little out there currently that matches their aesthetic, visually or sonically. The artists behind PC Music clearly understand this, and for all the talk of art school wankery, and all Pop Cube’s spectacle, there is clearly a lot of truly subtle and cerebral artistry going on behind the scenes.

The fans who had paid to come to the sold-out event, meanwhile, seemed largely ecstatic to be there. Whether they were aware they were part of the performance or not, it ultimately didn’t seem to make a difference to them. The stage was mobbed all night, and while the front room remained open, few in the crowd opted to hang out there. The point of the night was to party and celebrate PC Music, from their perspective. Hannah Diamond’s shirt on stage read “It’s All So Simple…”, a reminder that sometimes allowing yourself to step back and enjoy the spectacle can be the most important thing you can do for yourself in a world overwhelmed by media.