Chapman’s Progress Report is sexy, sophisticated and self-assured. We spoke with him to find out more

The 23-year-old artist steps up on his debut album.

Raised in Chicago but based in New York, Chapman resides in the underground club scene that unites those cities and others, where rap, R&B and electronic music coalesce, and where racial and sexual divisions seem non-existent. He first emerged back in 2013, taking shots at Macklemore and releasing his brash XL Life EP.

Today, he releases Progress Report, an album that lives up to its title: the 8-track effort sees Chapman making strides as a rapper, singer and songwriter and settling on a cohesive sound. Plus, he gets a little help from his friends, many of whom are no strangers to FACT: Progress Report features production by The-Drum’s Jeremiah Meece, LSDXOXO, Different Sleep and Neuport, along with vocals by artist Hari Nef and R&B artists to watch Ian Isiah and Dre Green.

We interviewed Chapman by phone, exploring how his music has changed since his last release, the importance of an artistic community and how being true to himself has improved his art. Stream Progress Report and read our interview below.

“It’s all about exploring those parts of you that you don’t necessarily live out.”Chapman

What has changed for you since XL Life?

What hasn’t changed? I look back on that, I’m like “who even is that?” When you make music and put it into a public forum, you’re exposing yourself and your growth. When I came out with that, I had no idea who I was musically — or probably as a person — and I was trying to figure it out. I was definitely trying to impress my artist friends, and I felt the pressure of making a first impression, and I also didn’t know what I wanted to do, but I knew I wanted to do something.

That first EP is an example of that: just me saying, “Hey, I’m here.” I hadn’t figured out how I could take my tastes and directly inject them into the music. It’s been a journey of figuring that out, and everything has culminated pretty perfectly with Progress Report. That’s why I called it that: it really felt like I’ve made so much progress, lyrically and musically.

I know what kind of music I want to make, and it totally correlates with knowing what type of person I am. The LP really has a cohesive sound, and I don’t think I understood how that can make you feel assured and really good about your direction as an artist. It feels like the first thing I’ve ever done.

Tell me about your collaborators.

All those people are my friends, it was really easy to work with everyone, it just felt really natural. I’m very much a dual-city person: I live in New York, but my heart is in Chicago, and I try to spend as much time there as I can. To get to work with Jeremiah [Meece] and Dre [Green], and then to work with people I’ve become really close with in New York like Ian Isiah, it’s kind of a reflection of my network.

It’s great to know all these great people in different places, and how they’re all doing different things, but they can all “live” together in this artist community that is starting to form across these cities. Everyone I worked with was a natural pick for me, I just went with people I really believe in and hoped that they would be down [laughs]. Everyone was really supportive and receptive to what I was doing with their tracks.

We’re all on the same wavelength; everyone is different but we can understand each other. I think that’s the beauty of this whole scene: in ten years, people will look back and say “wow, how funny is it that we were all in this together?” I know for these other people, they’re flying around, doing different things, and it can feel pretty isolating. But knowing that they’re out there, and that they’re real people that I fuck with, is really comforting.

I think ‘Hari’s Intro’ really sets a sexual tone for the record, in a way that is different from the XL Life.

I think the first EP is talking shit, “I’m the shit, I’m a young little shit” [laughs]. Now I’ve kinda honed that into something more sophisticated, more developed and more real. When you’re young, you just want to pop off — “I’m this and this, fuck all y’all” — I just wanted to come out screaming, and now I’m realizing that it can be real powerful to cut things down and get to the root, and make sure everything you’re saying has weight to it.

Hari [Nef] is just killing it. She’s an incredible model. She’s trans and doing an incredible job representing for that community. I don’t know how many people know this, but she’s a really incredible writer. I asked her if she would want to write something, and she recorded it acapella. I thought LSDXOXO would be perfect for it, because he makes beats that are so dark but so sexy, a little sinister.

That intro, to me, perfectly sets the tone. Musically, it’s all about exploring those parts of you that you don’t necessarily live out. In real life, I’m pretty friendly and light-hearted, but musically, I want to explore the darker parts of me, because those are the parts that can get pent up inside. That’s why I make music: I want to pour that stuff out of me and release it.

One of the first songs you put out was a critique of Macklemore speaking for the gay community. Are you concerned about the ghettoizing of “queer rap,” while at the same time speaking to your own experiences?

At the beginning of this whole conversation being brought to light about LGBT representation in hip-hip — and we haven’t really gotten to the L and the B and the T, the discussion is really just about gay men — it used to be something that concerned me. Hip-hop is something that’s really, really important to me, and I don’t take it lightly, as far as treating the culture with respect. I’m a student of hip-hop, and I come from a place where it’s embedded in me.

When I was first starting, I was definitely afraid, and it was a huge step for me to come out and make that music and say my piece. After a while, I realized that with the American underground culture, everyone has an opinion, everything is a think piece, and everyone wants to say how they feel. I realized I needed to look within myself. I just lean into whatever feels the realest, that’s all I can do. Whether I’m a contradiction or not what people think I’m supposed to be or whatever, that really isn’t up to me. All I can do is be myself, and if I know that I’m doing that, I can be at peace. 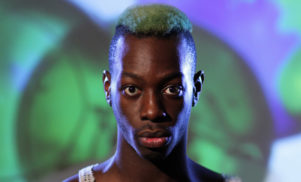