Beats, Church and Life: An interview with Stones Throw’s Knxwledge

When I call up Glen Boothe, the Los Angeles-based producer known as Knxwledge, he’s on his way to Russia.

The day after our chat he’ll appear on a special Boiler Room broadcast as part of a “ridiculous line up” that includes Detroit rapper and producer Black Milk, fellow beat head Samiyam, hip-hop pioneer DJ Premier and NxWorries, Boothe’s fragmented soul project alongside singer Anderson Paak. There’s a joy in his raspy voice as he remembers his first trip to Russia the previous year and the cultural and linguistic differences he encountered.

Since he first emerged during the late 2000s explosion of instrumental hip-hop that defined the so-called beat scene, Boothe has been putting in work. So much in fact that Flying Lotus, figurehead to the beat scene, told the audience of his most recent BBC Radio 1 residency show that Boothe “makes a million tracks a day, it’s insane, keep up if you can.” And the work ethic has paid off. In the past year Boothe signed with Stones Throw, both as a solo artist and for the NxWorries project, and got a beat placed on Kendrick Lamar’s To Pimp A Butterfly. This has lead to increased interest from the rap world including low-key legend Roc Marciano, chef turned rapper Action Bronson and beat supremo Dr. Dre. Life is good for Boothe right now but it took guts and dedication to get there.

It all began in a New Jersey pentecostal church in the 1990s, where a young Boothe spent much of the first 17 years of his life. “Five days a week,” he remembers. “It was a family church, belonged to my second aunt or something, distant family. All I remember as a kid is going to church, choir rehearsals and helping my parents clean the place.” His aunt and uncles played music for the congregation and the young Boothe would have the run of the instruments once the cleaning was done, a situation that first stoked the fires of his creativity. Then came the hand-me-downs. “Over the years these instruments would go bad and become mine. The old drum set. Old synths with missing keys.” As he got older Boothe convinced his parents he needed a sequencer of some sort and so they drove two hours to Sam Ash, the only music store in the area. There he got his hands on a Roland SP–303, the same portable sampler that Madlib popularised in the early 2000s with the kind of blunted beat experiments that have come to define Boothe’s work as Knxwledge.

Despite his growing collection of instruments and music tools, Boothe hardly had any chance to use them, with church, school and sports taking up all his spare time. One trick he developed early on was to leave the radio on the oldies station and record it all while he went to church. On his return he’d go through the recordings, discovering, absorbing and practicing rudimentary techniques. Another beneficial hand-me down came from his older cousins who introduced the voracious young fan to hip-hop and the possibilities of sampling through the work of people like Jay Dee and Madlib. Yet Boothe’s religious upbringing meant that while his parents let him create and listen to his music, it all had to be “in the headphones.”

Over the years Boothe found more ways to practice his craft. One particular tale involved hijacking the church’s recording system. “My church was rigged to record the sermons, so I would plug the SP into the house system and be able to record,” he remembers before bursting into uncontrollable laughter at the very thought of it. “I’d record my joints, these little loops, to tape so I could take them home.” He also got a demo of Cubase, the Digital Audio Workstation, from a supermarket CD. “I put it on my mom’s computer and used it to record keys and drum loops. It was all scratch stuff, just learning to play by ear more than sequencing.”

The trademark of Boothe’s work as Knxwledge is a collage-like approach to sampling. Obscure sounds and instantly-recognisable rap snippets fly in and out of rhythmically loose beats that still feel like someone figuring things out. Or perhaps they have it figured out, and it’s everyone else who needs to catch up. “I don’t pay attention to human time. I feel like my approach comes from playing music,” he explains. “It’s like I try to recreate the pockets and grooves that you find in a lot of music. It’s deep down in there from my youth.” In the process, Boothe may well have found his own sampling pocket: An inexplicable knack for finding, looping and chopping up the funkiest shit in the most irresistible way.

Before landing in Los Angeles in 2008, Boothe spent a year at university in Philadelphia. He ditched classes and spent most of it indoors, crafting a batch of beats that would ultimately help kickstart his career. “It was the worst feeling but at the same time music is bliss so I was on that high pretty much the whole time.” After years of rigorous church upbringing, the freedom of university and access to the internet proved irresistible. On MySpace he connected with another local New Jersey producer, Ringgo Ancheta, known as Mndsgn. In some bizarre twist of fate the pair wound up working the midnight shift together at a local drugstore. “We’d make beats all day. Then work all night. It got so crazy we had to take a few months off seeing each other.”

Together, Boothe and Ancheta worked through various music software before coming across Ableton Live. The software would become key to their artistic evolution. They hijacked Ableton’s Session View, intended to give musicians a canvas on which to perform live and improvise, and turned it into an endless composition playground. Sometimes referred to as the clip mode, it became the name of their first music collective and label, Klipmode, alongside fellow MySpace dwellers Suzi Analogue and Devonwho. Halfway through Boothe’s failed first year of university he got booked at San Diego University alongside Samiyam, The Gaslamp Killer, Houseshoes and a young upcoming Detroit rapper by the name of Danny Brown. “My first ever fucking show dude,” he exclaims, still incredulous. 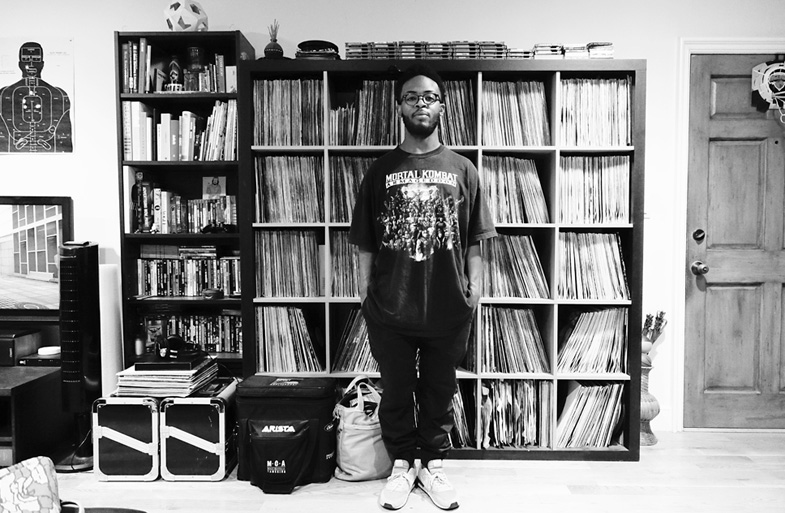 “I can’t even pinpoint where I am, it feels like I’m in the jungle somewhere.”
Knxwledge

Having got a taste of the West Coast and the potentials that music could bring left Boothe with no doubts as to his next move. His tone is surprisingly earnest as he remembers the choice he had to make. “It was weird being back on the East Coast after that but then I thought about it and my dad moved over from Jamaica in his 20s. And I was only thinking of moving to a different coast.” Of all the places in the sprawling urban monster that is Los Angeles, Boothe ended up in Hollywood. The belly of the beast. The antithesis of what the city’s underground music culture stands for. And yet it’s been his home for seven years. “I can’t even pinpoint where I am, it feels like I’m in the jungle somewhere.”

Boothe got to Los Angeles just as the beat scene was exploding. All he really remembers from those first few years is “rolling with it, trying to keep up with rent.” Despite not being of age he found himself on the Low End Theory lineup, largely off the back of a string of self-releases made available via Bandcamp, beat tapes culled from his wasted year of university. In 2010 the Irish label All City, an important and rarely acknowledged European incubator for the beat scene, came knocking and released his official debut, Klouds, with artwork from fellow Los Angeles beat kid Teebs. From there the bookings started coming in and with it increased travels. After failing university and uprooting himself to the other side of the country, the gamble was beginning to pay off. “I can’t believe some of the places I been just from…” he trails off. “Just making beats that people like, loops, it’s crazy. Mindblowing. It’s hard not to be speechless sometimes.”

It was Boothe’s rapacious love of sampling that brought him to the attention of Stones Throw. The hook-up came after he played a remix of Charizma, the late MC partner of Stones Throw founder Peanut Butter Wolf, at a Boiler Room session in L.A. “Wolf came up to me then and a year later I was doing the Vinyl Weighs A Ton tour. There are a few people or things in life that are monuments of sorts, and Stones Throw is one of those for me. I fuck with Wolf’s overall selection. It’s really tasteful.” Boothe’s signing to the label came a year after Mndsgn, another ironic twist of fate as the pair had first met Wolf and the Stones Throw entourage years before at a show in Philadelphia.

As for Kendrick Lamar, that hook up came via another L.A institution, the photographer and filmmaker Eric Coleman, co-founder of Mochilla. A lifelong beat head, and resident at Kutmah’s Sketchbook night which laid the ground for Low End Theory, Coleman met Lamar during a photo shoot for a magazine cover in early 2014. “I guess he had the cassette with my beats, an anthology I’d put out earlier that year, and he played that shit to Kendrick and put him on. Kendrick texted me after that and it was on.” The wheels were in motion and Boothe just waited, imagining what his beat might end up sounding like once Lamar got done with it. “It was the first time this had happened. And a rapper of this calibre?” In the end the original beat, released as ‘So[rt]’ on his 2013 Anthology cassette, was complimented with keys and an overall polish courtesy of another beat pioneer, SA-RA’s Taz Arnold. “It was a year or so until I heard it and it was when everyone else did. It’s just fuckin incredible, wild to be part of that shit.” During his Boiler Room broadcast the day after our chat Boothe played the track, ‘Momma’, and the smile on his face said it all.

Beyond the acclaim Lamar’s album received it was also key in its celebration of Los Angeles talent, including many names that had emerged from the beat scene and the experiments that had preceded and surrounded it. Boothe, and others like Samiyam or Flying Lotus, are finding themselves in a situation that’s new in rap music. They’re producers who don’t need MCs to have a career. A reversal of the traditional power structures that underpinned the music for so long. Boothe says that he senses that change and can tell the rappers do too. At the same time, his relentless work was also preparation for the day he could sit at the same table with them. “I was trying to build a catalogue so that if I had the chance to sit with someone someday I could just play their ears off. I got to sit with Action Bronson and Roc Marciano and I had to stop playing them beats cos it was too much. They get frustrated. It’s a ill feeling. And kinda fucked up at the same time.”

The covers of the 2013 albums Kauliflowr and Anthology both depict a young Boothe in his Sunday best. On the former he’s looking straight at the camera, a slick fade adorns his hair and his tiny shape is cut against the towering frames of the adults stood beside him. On the latter he’s crouched in front of a door, flipping a peace sign with a wide smile. The little kid has become a man, and while the choices he made along the way might have seemed daunting, they’ve proved that knowing yourself is the surest way to get what you want.