From Kinshasa to the Moon: Mbongwana Star’s Doctor L talks Afrobeat and appropriation

“I don’t think that anyone had heard of Afrobeat before I did that record.”

Liam Farrell isn’t mincing his words when I catch him during a spare moment on tour. He’s Mbongwana Star’s guitarist and produced the band’s outstanding debut album From Kinshasa. He’s also their representative for this interview, as none of the Congolese members of the band speak English. Farrell’s got a longstanding track record of working with musicians from the African continent, one of the most notable examples being 1999s Black Voices, an album from the so-called architect of Afrobeat, Tony Allen. Along with his solo work as Doctor L, that’s one of over 100 records where you’ll find his name in the credits. But the backseat role of the producer means that this is something that many people are unaware of. Farrell doesn’t give the impression that he’s bitter about it, but is enjoyably frank in explaining his influence.

“Before that, it was only the people who knew about Afrobeat who knew about it, if you know what I mean,” he says, over Skype. “Since [that album] it seems like there are two or three hundred Afrobeat bands in France.”

Farrell has also been out to Mali, Senegal and the Ivory Coast to produce records or involve artists in projects he’s bringing together. Moving from Ireland to a diverse corner of Paris at a young age, making those connections is something that he says has come naturally. He started out as a drummer in a string of punk bands before finding himself gravitating toward the city’s nascent hip hop scene, working as a producer for socially conscious rap crew Assassins in the early 90s. Since then, his output has alternated between the looped, muddy eclecticism of his solo work and an increasing number of projects steered from the producer’s chair. His involvement with Mbongwana Star was initiated by the band’s manager, Michel Winter, who has been working with musicians from Kinshasa since 2002. The results are kinetic and exciting; the record’s unpredictable energy is balanced by a polished sheen that allows its frantic grooves to shine through.

Two of Mbongwana Star’s members were part of Staff Benda Billi, the last band to garner some serious attention outside of Kinshasa. They broke up in 2013 following poor advice and infighting; speaking to Farrell and briefly to Winter too, you get the sense that Benda Billi’s collapse has given them added determination. It feels important to make this project a success for a group where most of its members still live on the street.

“Here, for whatever reason, everything [sounds] a bit fucked up.”
Liam Farrell, Mbongwana Star

The distortion and noise in Kinshasa have been mentioned as important in making the album. Would you be able to talk about that a bit?

The sound environment in the city has got that touch, everything’s saturated. In Europe, because of our equipment everything sounds clean. Here, for whatever reason, everything [sounds] a bit fucked up. But that’s the charm of it all, you know – everything’s broken but it’s been mended.

People had good instruments, over from Europe, up until the 80s when everything broke down. The whole city became a mess so there were no more new instruments. But people still had TV and a connection with the rest of the world, so they started to imitate [what they heard]. They imitated hip hop and things like that. I remember hearing this guy scratching with tapes and making things that reminded you of all kinds of other music you’d heard.

So you’ve got that element of survival, which I’m sure exists in other countries. It probably exists in Brazil. It’s in poor countries where they don’t have the instruments so they go to dustbins and improvise with things like that.

So where they’re re-creating that music they’ve heard from elsewhere, in some ways you’re taking it back to Europe. In bringing the recordings back to your studio in Paris you’re giving it the kind of production it might not have otherwise had.

But for me that’s not all I’m interested in. I’d say [my role is] more like a moviemaker – you meet artists and you work with them. I knew what I’d first recorded was too local and wouldn’t have touched Europe. To me, music means bridges. I produced it in the direction of the people that I met, so it’s been created from my point of view but for them.

And I’ve gotta say, the album’s cool but we’ve done so many incredible shows. I think the live show is even more exciting than the album, which is nice as that’s often not the case with a lot of these studio projects. It’s turning into a real rock-y band like they used to have in the 70s. To get to the position we’re in, we’d usually have needed to have lots more rehearsals and lots more money. We’ve started from scratch but everything has picked up really quickly.

That seems to be characteristic of the band. Like the drummer, for example, who’s only been playing the kit for a year right?

Yeah, he was a percussionist before that. But for me it’s not just about musicianship, it’s about an idea. It’s about opening our minds to the way we think about the music that comes from Africa. As a project it’s different to most of the things that we import from there – it’s not about showcasing the super singer or the super player. This is more like The Sex Pistols.

I can see echoes of that punk ethos in the band, but to me the production of the record still sounds a lot more polished than that.

It’s more about the energy than the style of the music itself. When I say it’s rock-y, I don’t mean that it’s rock ‘n’ roll, I just mean that these guys are more freaky. It’s about the character of the band. That’s what this project is about, I didn’t want it to be a lie like most projects from Africa are. This project is about reality – the whole thing’s been a big accident. I never knew what I was gonna do, they never knew what was gonna happen, there’s been no preconceptions.

When I took back the tapes, I probably took out 70% of what I’d recorded in each song to get it to the way I thought it should sound. I stripped it back a lot. In Kinshasa, one of the problems is that they sing a lot and you don’t have any space for an instrumental part. It’s very vocal. So that makes it a bit boring sometimes, it takes the groove away. I wanted to strip it back to hear the groove, as that’s the culture I’m from. We’re all kids of James Brown, or something like that! 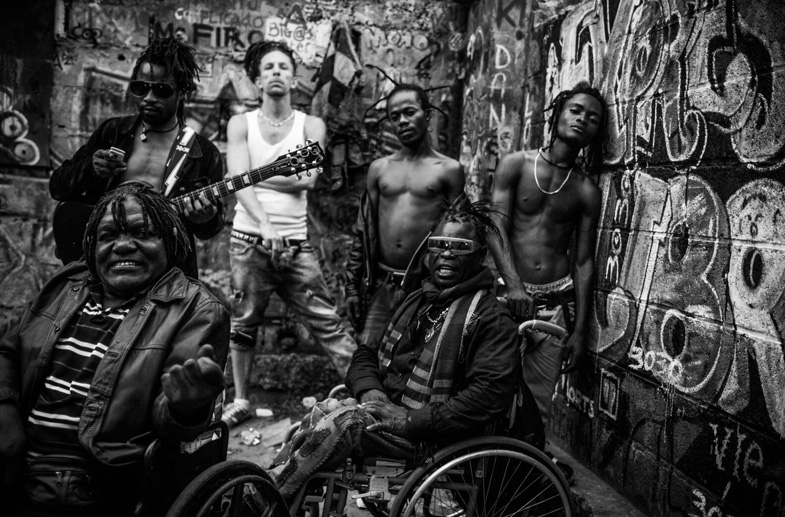 “Everyone’s been lying and hiding everything.”
Liam Farrell, Mbongwana Star

So how do you see the title, From Kinshasa, fitting with that approach?

It was originally supposed to be called From Kinshasa to the Moon, like the first track on the album. But World Circuit, with their English not being very strong, didn’t really catch that part! But a lot of the press are taking it on now, so I phoned [World Circuit] to say that they really shouldn’t have changed the title as it conveys the idea that your preconceptions about music from certain places might not be quite right. It’s from a city where you wouldn’t imagine that you’d find all these artists. The guy on the cover is a performance artist and there are tons of people in the city making incredible punky art. Kinshasa’s very good for that, there’s a big artistic subculture and people are instinctive in the way they work.

And not being sacred about how you present that culture seems important in the way you’ve gone about it.

I don’t think we should lie. It’s about finding a good balance – how can you expect people who live on the street there to be knowledgeable about production and to know what’s going on in the rest of the world? They don’t, and you can’t invent something that doesn’t exist. Everyone’s been lying and hiding everything. With most of the stuff, it’s a case of, “Who produced it?” “Oh, a white guy from Europe.” It’s saying it’s African, but it’s kind of lying.

I never went there knowing how we were going to work together. It’s about having faith in what you’re doing and bringing it somewhere. That’s what I do for them and that, for me, is the real job of the producer. I didn’t go there to do house music, like other people have done in Kinshasa. Like Damon Albarn’s [Kinshasa One Two] project, I don’t really get it – you could stay at home taking samples from the internet and do the same thing. You don’t need to go there to do that. I’m not saying it’s bad, but we already have that music. It doesn’t make a band. That’s more about taking the vibe of that music to make something of your own. It’s a different kind of involvement compared to this project, where I’m trying to do everything for the guys – all the imagery and videos, making it easier for them to communicate.

And there’s another side to it, in that these people need to make a living. Most of the band still live on the street, so there’s a humanitarian aspect to the project. You’re helping people and they’re helping themselves, while making art at the same time.