He’s best know for his roles in The Wire and Luther, but a meteoric rise over the last half-decade culminated last year in a lauded portrayal of Mandela. According to IMDb, he has an impressive seven more films currently in the works.

But he’s not just an actor. Elba has been DJing since the age of 14, and made his pirate radio debut in the early 90s while still a teen. Since then he’s released a series of hip-hop mixtapes as King Driis, collaborated with Skepta on a ‘Shutdown’ remix that melted the internet just last week, and begun a globe-trotting series of parties called 7Wallace.

Ahead of his next 7Wallace event, to be held this Saturday at Oslo in Hackney, FACT spoke to Elba about his early life on Hackney pirates, making mixtapes in his trailer, and being mates with Seth Troxler.

You started DJing when you were 14. What were you playing then?

It was a lot of calypso and reggae, because I was doing a lot of African weddings. Lots of early ragamuffin stuff. Then when I got slightly older I started to get into soul, then later on, when I was about 16, I got into hip-hop a bit more. I was always aware of hip-hop, but I didn’t really play it until much later.

Is that the kind of stuff you were playing on pirate radio?

By the time I got to radio, probably about 18 or 19, I had a massive love affair with hip-hop and r’n’b, and that’s what I played. I was very upfront – always brand new music. I was always in the West End getting new tunes, getting tunes on import, all the 12″s. I was a proper nerd. It was hip-hop, r’n’b, then the very early beginnings of what became jungle. I had a drivetime show, so I could get away with hip-hop, r’n’b, and soul, then every now and again I’d have a jump-up half hour where I’d play drum ‘n’ bass, jungle, a little bit of house.

What stations were you playing on?

I used to play on one station called Climax FM, and then I did another station but I’m bugging on the name. It was one of those stations that got shut down so often.

How official was Climax?

It was a proper pirate, but it was a strong pirate. Back in the day it was Station FM, Paradise FM, Climax. These were Hackney stations. Early Kiss FM too, but Kiss was a bit further up the line than us.

How did you get a foot in the door with them?

I used to DJ at a club called Shanolas, in Hackney. It was actually on the same ground that the Olympic Village is on now. I used to do a Saturday night there, and some of the DJs there got me hooked up into pirate radio. All the clubs used to use the pirate stations really heavily to promote themselves, so any DJs that were in the clubs that weren’t on pirate radio got offered jobs quickly, because they could promote the parties.

How do you feel like your tastes have changed since those days?

What I play has definitely changed and grown. Now, I’m very much into bassy house. It’s a far cry from what I played back then. I still love good, well-produced, proper club rocker type music, but now I’m into house, and I’ve been playing house for the last four or five years. I feel like I’ve found a very comfortable lane for me.

When I was living in New York in the early 2000s I was playing a lot of hip-hop – all the golden era stuff, from Tupac, Biggie, to Dr. Dre. Then over the last five years, house has been the groove that I feel most comfortable with. I think I’m a better DJ in house than I am in anything else.

That hip-hop side is obviously most evident in the King Driis project. Who were you modelling yourself on at that time?

The King Driis stuff was a time when I was working as an actor and I was bored in my trailer with a microphone and a laptop or six-track recorder. That was a hybrid between early rap stuff and reggae artists like Shabba. In fact, when I was doing the club scene in London, I used to be quite a hype man. You’d rap to songs in the hooks and the instrumental breaks and just do a little toasting. That’s where King Driis came from. I like to write rhymes, but I’ve never considered myself an MC or a rapper. 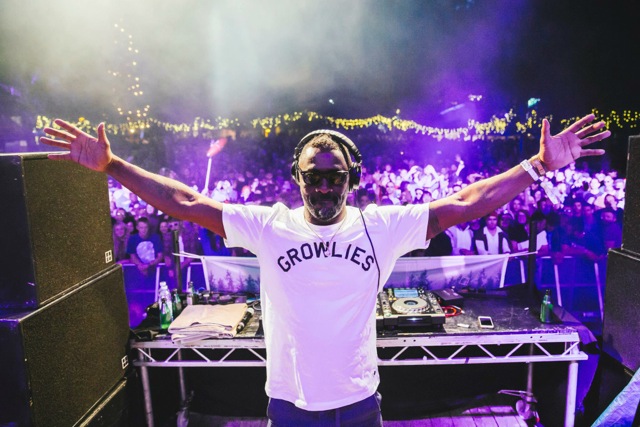 “The ‘Shutdown’ beat came, and I just thought, ‘I want a piece of that.’ It just kind of ran off with itself.”

You recorded over the Exhibit C instrumental as King Driis. When did you first hear that beat?

One of my friends was working with Just Blaze, and he said ‘you’ve got to hear this beat, it’s gonna go bananas.’ But I put that out not even as a joke – I didn’t make a big deal of it, and honestly I didn’t even know if anyone had really heard it. It was just an experiment to me. It’s the same thing that happened with ‘Shutdown’. The beat came, and I just thought, ‘I want a piece of that.’ It just kind of ran off with itself.

But that’s obviously an official remix. How did it come about?

I just sent out word to Skepta on Twitter, but I didn’t expect him to pay attention or listen. Then the management teams got together. I said, ‘send me the instrumental’ and they did, so I said ‘fuck it’ and I did it. Before you know it, I just sent it to Skepta and he loved it. Before he’d even heard the verse he said, ‘I’m gonna have Idris on the remix.’ At that point the pressure was on, so I had to deliver.

You come from an East End background. Do you feel that grime is still speaking to that, or do you think its concerns have changed?

I think grime is an evolution. The roots of hip-hop spoke to a very small sector in New York, then before you knew it, it became a worldwide phenomenon. I think grime has a similar energy to it. It still does speak to the working class, and people that have come from a certain struggle, but it’s growing, and the personalities are growing. People on grime records have got different things to say.

Do you pay much attention to grime coming out of places outside London?

I know some of the crews that are coming out from Birmingham and Manchester. They’re heavy. The MCs have got lots to say, and they’re prolific. They work really hard. The mixtape buzz up there is proper, and they’re all over the social networks. It used to be just an East London thing but it ain’t now – it’s grown.

Do you feel like it loses anything because of that?

It’s inevitable to the purists that it’s going to lose something that they love about it – its authenticity, its ruggedness. Once people are enjoying it from a mass perspective, it’s going to lose some of the texture that made it original in the first place. But I don’t think that’s a bad thing. It’s got to explore different territories. The UK has done that for years. It wasn’t just grime – it was drum ‘n’ bass before, and certain types of house before that, certain types of funk music. It starts off as a seed, a kernel, then it grows into a worldwide phenomenon. I think the UK is great at doing that, and I think we should encourage that.

From an actor’s point of view, doing music is very precarious. People are just not willing to accept it. So I decided to keep my music close to what I do for a living, and make music from the perspective of the characters that I play. My first album was mi Mandela, which was a perspective on that character and that film. Murdah Loves John is a perspective on my John Luther character.

London’s a big character in Luther, and I’m trying very hard to make this album, when you put it in your car, to feel like you’re driving around to a soundtrack that reminds of the UK, and of London especially. I’m going to get a lot of new artists and voices that we haven’t heard before, and bring together a cool album.

Is that in collaboration with any of the Luther team, or is that your project?

It’s my own project, but I’ve got the support of the BBC and the Luther producers, of which I’m one. But it’s very much an independent project. I don’t make music for money. I just do it because it’s an expression of mine – it’s a way of getting out some of my creative thoughts. Not to sound wanky, but that’s the truth of it. My brain is too hyperactive to just sit still and do acting. I can’t do that.

Do you feel like you achieved what you set out to with mi Mandela?

From an artistic point of view, definitely. The songs were very personal to me, personal to a time period, personal to a country. When you listen to that album, you definitely get that vibe. Commercially, I would have liked it to have done much better, but like I said, I didn’t do it for the money. I definitely feel that as a piece of art, that album stands up as some of my best musical work.

Is there a concept behind the 7Wallace nights?

Its roots lie in a home address I used to live in. I was on a cusp in my life. I was going through a lot of trouble, but I used to have these big old parties, and they were a great release. The idea is that the music is good, the vibe is good, and there’s no set agenda. People just come in to enjoy themselves. I’ve been doing these 7Wallace parties for about two years, and I’ve had an amazing time with them. This one’s special to me because we’re going back to Hackney, where I grew up.

How have you gone about booking acts for it?

Honestly, we did it like, ‘what are you doing this weekend? Do you want to come and play?’ It’s really that simple. We don’t have a massive booking system, but we’ve had everyone: Roger Sanchez, Pete Tong, Trevor Nelson, Seth Troxler. When I did them in Ibiza, it was rock star territory, but the DJ would come in just on a phone call. There’s no real strategy for it.

Is it more challenging trying to run a party like this in Ibiza?

Ibiza’s got the platform. It’s a party town. If you can get a ticket, you’re going. It’s not like you’re in Ibiza to do anything but have a good time. In London, it’s a Saturday night. But I think this party’s going to be big, because London’s on fire right now. There’s only 200, 300 people who can get in. I think people are just going to come out and enjoy themselves.