Featured Stories I By Chris Kelly and Miles BoweI 16.06.15

It’s been more than four years since James Murphy “retired” LCD Soundsystem, but you wouldn’t know it from the headlines.

The multi-hyphenated New Yorker has remained a fixture in music news, often because of things only tangentially related to this musical career. It’s a period of creativity that he was looking forward to even before LCD’s Madison Square Garden finale.

“I want to get some bad ideas and follow them through. You never get to now,” he lamented back in 2010. “The only reason to get semi-successful is so you can do that shit.” He’s followed through on that promise, pursuing a variety of “bad ideas” and seemingly diving into new projects every few months.

With news that Murphy would be taking one of his projects to the next level, we decided to look back at the last several years of Murphy’s post-LCD Soundsystem projects — good, bad and ugly.

It was easy to see trailers for Rick Alverson’s The Comedy and roll your eyes. A film about an aging Williamsburg hipster that spends his days wasting inheritance money from his dying father and being a sarcastic, irony-soaked asshole? It got instant attention from comedy fans because that hipster was Tim Heidecker (joined by his comedy partner Eric Wareheim) and it got attention from music fans because one of his friends was played by James Murphy. Yet it all feels intentional, as if stunt casting these people would bring in the demographic that needed to see it.

Alverson examines his ironic hipster under such glaring light that by the time those 90 minutes are up there’s only a dried husk left. The film is nearly nihilistic in its bleak portrayal of these empty characters and though Murphy doesn’t say much, his presence feels meaningful and he makes the most of it. In his final appearance on screen, he looks down somberly and you can’t tell if he’s having a moment of actual humanity or just checking his phone.

James Murphy made a movie! In yet another case of the producer teaming with a company to create something strange and unexpected, Murphy collaborated with Canon to put together Little Duck, a gentle little film he wrote and directed. It follows a young man’s return to Japan to see his recently imprisoned brother — the first time they’ve spoken in a decade.

It’s a film defined by quiet, honest moments. The climactic meeting is fraught with tension where old conflicts are finally brought up — yet it’s broken not with a fight, but a mutual laugh. It’s one of the many warm moments Murphy manages to create in a short span and a rare glimpse of the screenwriting abilities of a someone who turned down down an offer to write for Seinfeld.

Arcade Fire’s Reflektor was a big, important album, but for many listeners that was more because of James Murphy’s production than Arcade Fire themselves. Just as the band fielded comparisons to Talking Heads and U2 for their embracing of dance music and arena sized sounds respectively, Murphy seemed to be entering the new-Eno phase we all fantasized would reduce LCD Soundsystem to a footnote (and conveniently make their breakup less painful). In hindsight, Reflektor didn’t usher in some great production-era for Murphy (not yet at least), but that’s only made it feel more special — that time one of the biggest rock bands in the world pulled him back for one more job.

When IBM partnered with the US Open in 2013 they enlisted James Murphy for this absurdly high-concept project. IBM created an algorithm using their Cloud service to translate data from tennis players’ matches into music. The actual specifics of that “data” are frustratingly vague, and the videos IBM made about the project are as vapid as commercials (which, ultimately, they are).

Later, Murphy retooled the 400 hours of raw sound into a 12-song LP that doesn’t really make you about IBM or tennis. In fact, looking back at it a few years later, this feels almost like a spiritual sequel to LCD Soundsystem’s Nike-sponsored 45:33 and Murphy is playing along in order to sew some abstractly electronic oats on IBM’s dime.

On paper, James Murphy and Soulwax’s vinyl-only, 50,000-watt “Despacio” speaker system reads like a Pono-level move of music snobbery — but to hear him get into it, the design suddenly seems spartan and the intentions feel more like club philanthropy. Using the same simple, efficient ethic that Murphy brought to building sound equipment for DFA, the trio and engineer John Klett designed this sonic beast to benefit what they love about DJing: something designed to take the focus off the DJ, bring people together, and sound good enough to make them dance. James Murphy’s other great Soundsystem. 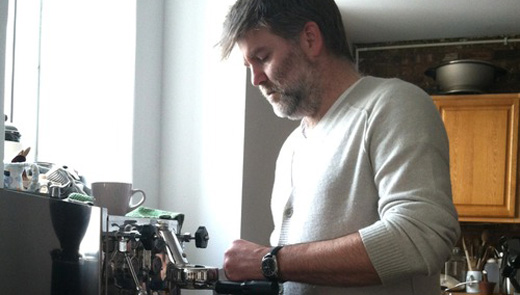 Never as Tired as When I’m Waking Up

From waking up to the smell of his parents’ percolator-brewed Maxwell House to scrounging for espresso shots while touring America in bands during the ’90s, Murphy’s coffee geekdom goes way back. After lusting after high-end espresso gear for years, his LCD success finally let him take his coffee game to the next level, and when he retired from LCD, he was able to focus on not just the gear but the coffee itself, teaming with Blue Bottle CEO (and fellow recovering musician) James Freeman for his own House of Good blend. 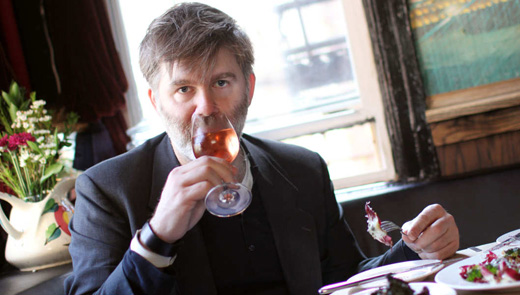 One of Murphy’s recent ventures has been The Four Horsemen, a small wine bar which only opened this month. It’s still early, but the reception has been warm. Much of that is due to the wine selection and the menu. It’s also a restaurant, though that hasn’t been as talked about. Murphy explained that decision to the New York Times recently saying, “We keep calling it a wine bar because we want to underpromise and overdeliver.” It’s a pretty classic interview response in a career full of them, although we can’t help but wish he was using it to describe a new album.

New York, I Love You but You’re Bringing Me Down

Murphy is one of the millennium’s consummate New Yorkers, and he has long looked to improve one of the best-worst things about the city: the subway system. Specifically, Murphy wants to change the harsh, digital beeps that the turnstiles make into music: a random note for each swipe, a chord for each tourist group and a symphony at rush hour. But while the Metropolitan Transportation Authority has called the Subway Symphony project “a very cool idea,” they have repeatedly said that it’s not going to happen. That hasn’t deterred Murphy, though: he just teamed with Heineken for a “live, brand-driven documentary” that will document the project’s trials, tribulations and — we’re guessing — ultimate failure.