“I tried to sign PC Music a year and a half ago”: Skrillex talks Aphex Twin, Full Flex Express and more

Over the past few years, Skrillex has become one of the most influential figures in mainstream dance music.

His name has been plastered atop multiple festival headline slots, EDM or otherwise. But since 2012, he’s been taking cues from the Grateful Dead’s 1970 trans-Canadian train tour the Festival Express, for his own summer tours. And like the Dead’s excursion, which included some of the era’s biggest artists, like Janis Joplin and the Band, Skrillex’s Full Flex Express is a multi-artist experience.

This year’s tour is headlined by Jack Ü, his excellent collaborative project with Diplo, and will feature performances from Zeds Dead, A$AP Ferg and Hundred Waters, among others. FACT caught up with Skrillex to talk about the inspiration behind the tour, his feelings about being classified as dubstep and his Aphex Twin fandom. 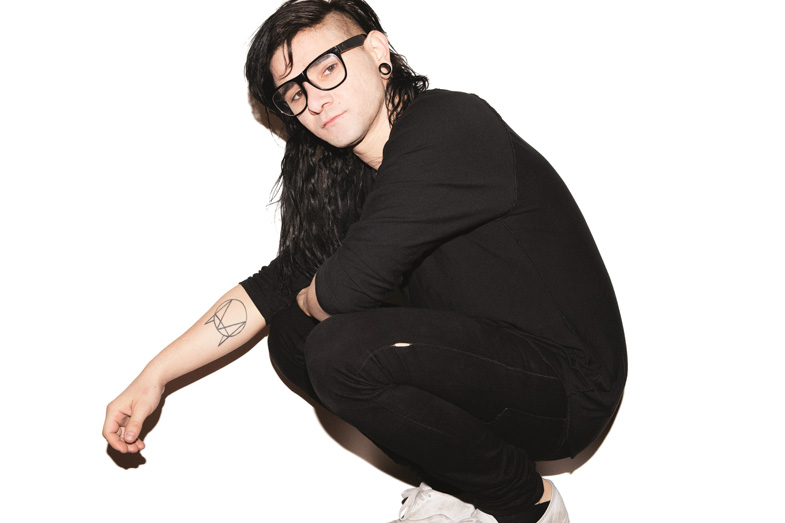 “I can’t blame culture for trying to put a word to the sound that may not even exist.”
Skrillex

What inspired you to do your own take on the Festival Express?

It was me and my manager, I think. We were on a plane. I think we may have been flying back from the UK, it was a long flight to New York or something like that. He just brought up this documentary on the computer. We were sitting next to each other and both had headphones plugged in. We got so drunk, we were drinking wine. We watched it and were like, ‘Yo, we should do that’. It was a silly idea but we pulled it together and made it happen. We were inspired by the idea of having a really amazing experience, professional experience, not just for the fans, but for the artists and other people involved.

Do you find you get restless by plane travel?

I’ve been doing it for so long, even when I was touring with my old band. It’s something that I’ve just really acclimatized to. It’s something you’re forced to do. But being on a train is really, really relaxing to me compared to all the other means of travel.

And you get to see a lot of cool stuff, too. You don’t get to see much on a plane.

Yeah, it’s beautiful. This train trip is one of the most beautiful trips you’ll ever take in your life. Especially western [British Columbia], it’s some of the most beautiful geography on the whole planet. It’s unbelievable. The train through that is incredible: Waterfalls and snow-capped mountains and lakes. It just looks amazing.

Is there anyone from the Grateful Dead era that has influenced you that might surprise your fans?

I grew up listening to that [music]. My parents are hippies. My mom grew up in San Francisco during the heyday of the Fillmore. She saw everyone: The Doors, Rolling Stones, Janis Joplin. She was at Monterey [Pop Festival]. I grew up around that music. I think a lot of the attitude behind how those artists work, there’s a lot of parallels with how me, my friends and my peers came up doing this music. If you watch the original Festival Express documentary, there’s scenes where it’s Janis Joplin and the Grateful Dead and all these people just hanging out in the train cars, having fun and making music. And that’s kinda how it is for us.

Speaking of collaborating with your peers, do you find there are any big differences between preparing to go on a solo tour versus preparing to go on tour with Diplo as Jack Ü? Do you feel a different kind of pressure than when you’re doing it for yourself?

I feel like every show has a different feeling when you wake up in the morning. It never feels the same, is the thing about it. I wouldn’t call it pressure, but I’m always pushing myself every day. Not even pushing myself but I’m always working on stuff every day and every day it feels different. It’s always collaborative even when I’m doing it alone because I was have a crew when I do a Skrillex show. We’re always working on the show and making visuals together, pulling YouTube videos offline and cutting them up. Every time [Diplo] and I meet, we make a new set that day or work on new music. My spare time is always [used for] creating, so that goes into the show in a whimsical way and is always kind of spur of the moment.

Is that what helps you to keep evolving your sound making music in this genre?

Yeah, I guess so. I’ve just always worked with so many different types of people, as well. And I never stuck to a certain formula, either. Just always looking for that new sound and that energy when you’re with someone in the room and an idea comes up that would have never [come] from an individual. Especially when me and [Diplo] are together in a room, a new, sort of, switch tips on in our minds [where] we have this whole new platform to create whatever we want outside of Skrillex and Major Lazer or Diplo or whatever.

One of the things that struck me about seeing you play at Governors Ball last year was how the first half of your set was a very focused, real dubstep set that could have taken place in basement just as much as headlining a festival before getting into your original material. But do you still even consider yourself a dubstep artist? Do you not like that label?

I’ve never not liked [it] but I’ve also never considered myself one. That was always something people kinda labeled me. That’s fine. I’m not mad at that, either. No matter what genre it is, the definition of the word always will change. It’s a weird situation for me because if you listen to my releases as a whole, even ‘Scary Monsters and Nice Sprites’, like that record blew up completely organically. In the first year and a half, it sold a million records worldwide. A non-commercial, non-Top 40 track, just organically [became a hit]. Beatport.com, they label whatever genre they wanna label you. There was no way to classify that sound at that time. The only thing you could do was call it dubstep. It’s just what happens naturally. But if you listen to my records as a full [package], they jump all over the place. There’s so many different sounds. So, I can’t blame society for something — or whatever, not society, I can’t blame culture for trying to put a word to the sound that may not even exist.

This is kind of in the same vein, but I read recently that you wanted to sign PC Music—

Are you stoked to see them blowing up right now?

I’m so happy to see them blowing up. That music is so fun. It’s some of the most freshest, some of the most pure forms of music coming out right now, in terms of the melody and the fun. It’s not meant to be pretentious and it’s super forward-thinking and really tapped into youth culture and Internet culture which I find really awesome.

Are you bothered that there are people who think it’s pretentious?

I don’t really pay attention to what other people call it, but I feel like there aren’t a lot of people from that world who are really fun people that just like to have fun and make fun music. 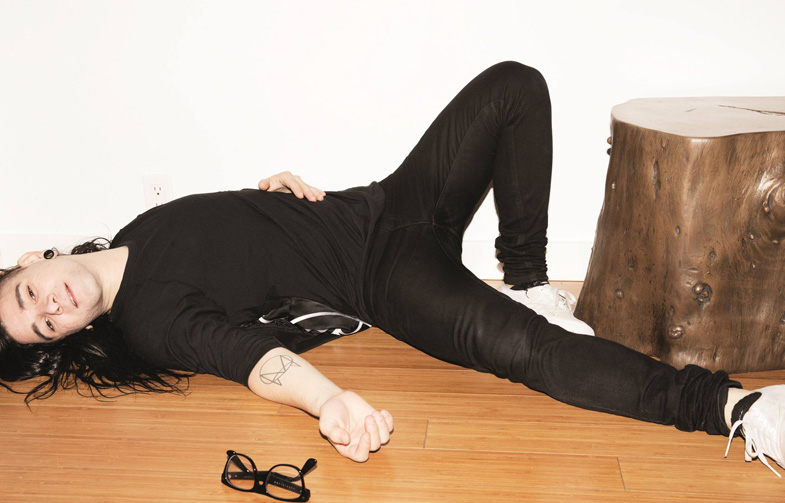 You were on to PC Music before they got a lot of buzz, who are you checking for right now that we may not have heard of?

It’s hard to say. I don’t think [classifying it as] not getting a lot of buzz is the right word for this because it’s still growing, but there’s a lot of different crews of people making great music from all different types of genres. What supports a movement is that there is actually a movement and more than one person doing it, like a little group of friends and young people. That’s the world I came from and how I came up. Back in 2010, me and Diplo were playing shows together with all the people that we see now that have become really successful, like Calvin Harris and Flosstradamus and DJ Snake and all these people that we’ve known for years and years. That was our little world. You see it happening all the time now, from hip-hop to electronic music. You have Moving Castle crew from Florida which are making almost like some reflection of PC Music, but more on the EDM side and the future bass side. And then you have the whole Chicago crew like Vic Mensa’s crew [Save Money] that’s hip-hop, but it’s more punk rock. It’s a different attitude. And The Social Experiment, they’re like the same crew out there and they come from musicianship and punk rock and jazz and hip-hop and they have this whole little crew world out there. People connect through the music and seeing the culture. I think those are always the most exciting things about music, when you there’s a whole zeitgeist around the sound.

I know there was word you were building your own studio for OWSLA and your friends and other artists. Is that still moving along?

It’s crazy, we broke ground like two months ago, finally. I bought this building two years ago. It was a battle with Los Angeles to get these permits and we had so many great people fighting for us to get it because we were doing it all legally and shit. I’ve had too much trouble doing illegal construction in the past. But it’s crazy that it’s actually happening now, finally, [and] in two months it’ll be done.

Before we go, I have kind of a silly last question for you. How much of the Aphex Twin SoundCloud have you listened to?

So much of it. I’m always on SoundCloud, in general, but the new stuff? I’ve listened to all of it. I just put it on and clean my house to it. I found my old CD book and I wanna take a photo of it because I have every [Aphex Twin] CD. Some of the actual CDs are missing but I have every release up until 2006. I know he’s released more stuff since then, but I haven’t bought a CD since 2006. But I have every single [one], like Caustic Window, Polygon Window, every Analord you can buy on CD.

Well, thank you for your time I know you’re super busy—

All good. Thank you. Shout out to FACT. That wasn’t even that funny of a question. I was expecting something way worse.

Listen, someone suggested a pretty controversial question, but no one had any intention of trying something weird here. I told my editor I was never going to ask the question.

I’m surprised there weren’t worse questions from FACT. Well, you’re a good person. You have good karma. You’re gonna get a dope birthday present this year.