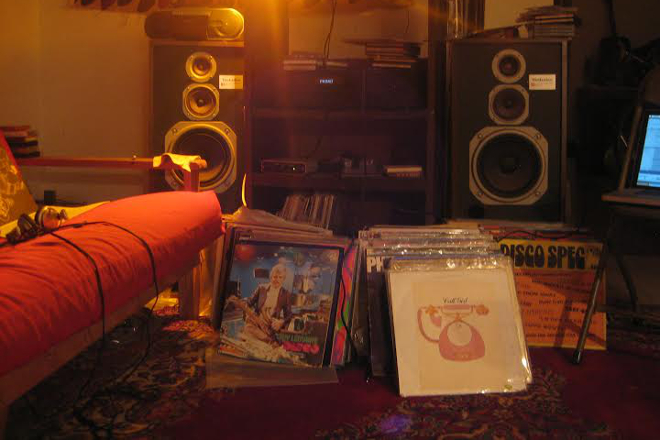 After last week’s journey into London’s impressive alternative radio scene, this week we’re back with a collection of more conventional mixes and podcasts. It’s still as diverse and brilliant selection as ever, with the first ever White Material podcast joining Eugene Ward’s music for dance, dark sounds at the wrong speed from Fotomachine, disco from Quebec and plenty more.

White Material broke its hiatus last month with a long-awaited debut of fathoms-deep techno from Morgan Louis. Given his status isn’t quite as high-profile as that of his label mates, he’s the perfect choice to inaugurate the White Material mix series, laying down well over an hour of music that ranges from the dense and punishing to techno’s lighter, tripper side. He’s not afraid of the odd vocal too – something many of his peers could learn from.

Alexander Moskos is a man of many talents: he’s probably best known as a member of AIDS Wolf, but he’s operated with various groups and under various monikers in his time. His most recent move is Hysteria, a new album under his Drainolith alias recorded with veteran scuzzers Neil Hagerty and Nate Young and housed on NNA Tapes. Away from the scuzz, however, it turns out he’s somewhat of a Quebecois disco aficionado, and this mix for Impose showcases that side of his collection. In Moskos’s words, “there is a real cultural legacy of both disco clubs and studio musicians playing disco in Montreal, a bunch of it through a label/studio called Unidisc … The opening track isn’t disco per se, It’s Robert Charlebois presaging what was coming. He knew. He was taking Quebec out of its past and shooting it into its future. ‘Sacrement!’ the disco era is coming.”

Combine Funkineven’s ear for groove and Actress’ love of strung-out, muggy techno and you’ve got Fotomachine. His Juno Plus podcast takes his ear for strangeness a step further, creating a mix of “dark sounds, sampled audio and wrong speeds” that sounds completely disorientating in the best way. Sometimes it sounds like you’re attempting to walk through glue; at other points it sounds like he’s pitching 45RPM tracks up to +10. It’s also got a healthy selection of unreleased tracks from his Technicolour label throughout, including one by L.I.E.S. affiliate Florian Kupfer.

Eugene Ward
Blowing Up The Workshop 46

Earlier this year Eugene Ward released the brilliant Paint En Pointe, an album of music composed for dance performances. It was a world away from the music he usually makes as Dro Carey and Tuff Sherm, filled with inventive sounds and offbeat rhythms recalling everything from PC Music and Holly Herndon to Detroit techno. His Blowing Up The Workshop mix is something of a companion piece to that album, made up primarily of similar recordings made by Ward between 2014 and 2015. It also diverts into the music of Estonian composer Jaan Rääts, Japanese producer Yoshinori Hayashi and more throughout, making it something of a voyage of discovery too.

Bruce, a fairly recent recruit to the Hessle stable who’s also released on Livity Sound’s Dnous Ytivil sub-label, approaches house and techno with an ear for the oddball – so it’s no surprise that as well as trippy club fare from the likes of Bjørn Torske and Pangaea, there’s also some tracks which sound like they fell off the grid long ago. Bruce makes it work, though, and some of the mix’s best moments come from his own unreleased – and untitled – dubs.

Quebec disco not niche enough for you? Jannis – of German-based label Jakarta Records – this week dropped part three in his essential run of Habibi Funk mixes. In Jannis’s words, “earlier this month I was in North Africa for another digging trip and ended up finding quite some records I didn’t know before or I had no copy of so I felt it was time for another mix. After every mix I make I feel like ‘Uhh, getting enough records I like for the next one will be tough’. But every time I end up getting proven wrong by the rich musical heritage of Arabic musicians that worked on combining local influences with western musical traditions.” Habibi Funk, it’s worth noting, is now also a label too: they just released Dalton’s Alech, a record from 70s Tunisia, and have more in the pipeline.