Amoeba Music show off the rarest, most expensive vinyl LP they’ve ever stocked

Only 4 other copies are said to exist.

In addition to stocking countless new and used vinyl, the Amoeba Music stores are also known for stocking some pretty rare vinyl. Now their Hollywood location has just put up possibly the rarest — and certainly the most expensive — record in the store’s 25 year history: a test-pressing copy of Bob Dylan‘s 1975 masterpiece Blood On The Tracks, currently listed at $12,000. 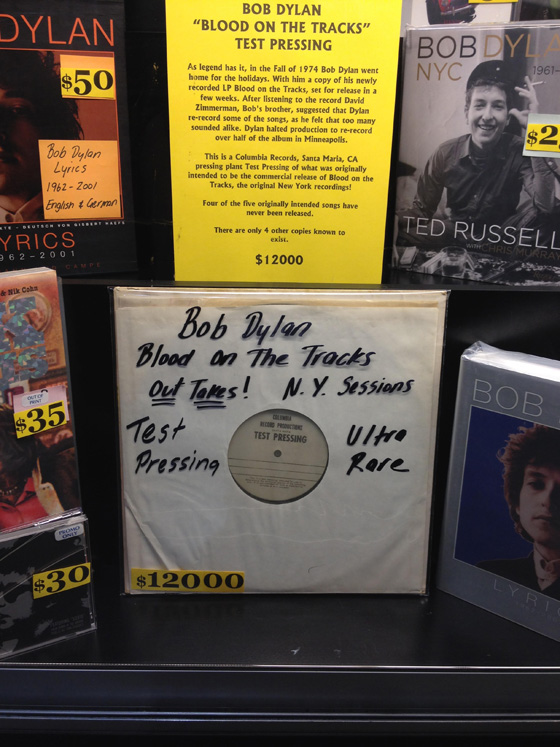 According to their site, the record was the crown jewel of a 4000-record collection acquired through a sale from an “iconic industry family” in New Jersey. It’s actually a different record than the Blood On The Tracks that we all know and contains unreleased alternate takes of classics ‘Lily, Rosemary & The Jack Of Hearts’, ‘Idiot Wind’, ‘If You See Her, Say Hello’ and ‘Tangled Up In Blue’. Amoeba tell the story of why that is quite well:

The story goes that in the fall of 1974, Bob Dylan went home for the holidays with a copy of his newly recorded album Blood on the Tracks, which was set to release in weeks. The album had been written after touring with The Band and becoming estranged from his wife, Sara, and though the resulting album delves deeply into troubled relationships, Dylan himself has denied that the album is autobiographical.

Upon listening to the record, which was recorded at A & R Recording in New York, Dylan’s brother, David Zimmerman, suggested that Dylan re-record some of the songs because too many sounded the same. Dylan then stopped production of the album to re-record half of it at Sound 80 in Minneapolis with different musicians, ending up with a 10-song album evenly split between the two sessions. The ultra rare pressing was made at a Columbia Records plant in Santa Maria, California.

You can go to the Amoeba’s location now to look at it on display — or, you know, buy it. You could also do that too. [via Stereogum]