Prince pulls catalogue from all streaming services except Tidal

According to Pitchfork’s Philip Sherburne, Prince’s catalogue is still available on Rhapsody, at least for the time being. It’s unclear whether this is permanent or if the service has just been slow to take his catalogue down.

You won’t find Prince on Spotify or Apple Music.

Prince has removed his entire discography from all music streaming services apart from Tidal.

“Prince’s publisher has asked all streaming services to remove his catalog,” reads a note on Prince’s Spotify artist page. “We have cooperated with the request and hope to bring his music back as soon as possible.”

The Purple One’s people are yet to provide a reason for the removal. Prince and Tidal have been quite cozy in recent months, with Jay Z’s streaming service broadcasting Prince’s Rally 4 Peace concert. 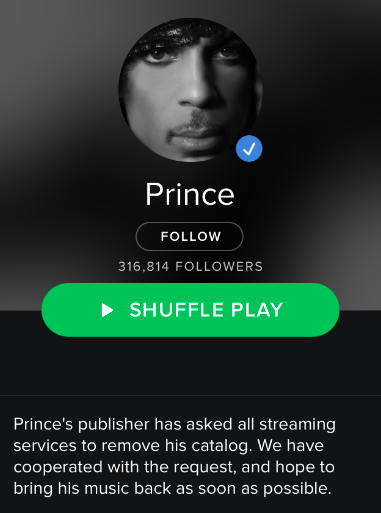