Over the past eight years a strange and frightening race of giant insects has descended upon the world’s festival sites.

Like steampunk Decepticons, they tower dozens of feet up in the air, built from ex-military scrap metal and breathing fire.

The cockpits of these bizarre mechanical beasts – beetles on wheels (no, not that Beetle) and spiders that inexplicably enjoy dancing to techno – have themselves played host to some of the most famous DJs of the last two decades: Roni Size, Aphex Twin, Fatboy Slim, Skrillex. But their construction was masterminded by two blokes from Bristol called Pip Rush and Bert Cole.

They call themselves Arcadia after the mythical home of the god Pan, and they commandeer their own field at Glastonbury. Later in the year, they will bring what Rush and Cole insist will be their “biggest and baddest show” to the heart of Bristol town centre.

“It’s never been done before,” says Cole of their proposed inner city show. “There were quite a few challenges that we’re not used to dealing with,” he admits, citing licensing issues and the sheer logistics of getting a structure so big into such a densely urbanised space, “but it’s all good.”

“It’s exciting for us,” Rush agrees, “because obviously we’ve been doing things out in fields, in festivals, for a long time, but to actually bring it into a city is…” For a moment he seems lost for words. “…pretty good.”

They spoke to me from a portacabin on site at Glastonbury where they were busy preparing their stage for the annual festival. This is their second year running in their current field, but Arcadia’s relationship with Glastonbury goes back to 2007 when they brought the Afterburner, a vast hybrid dancefloor-DJ booth–sculpture pumping out 30 foot flames and piercing laser lights. That was the year Arcadia was officially born, but the idea was hatched a year earlier, deep in the Spanish desert. 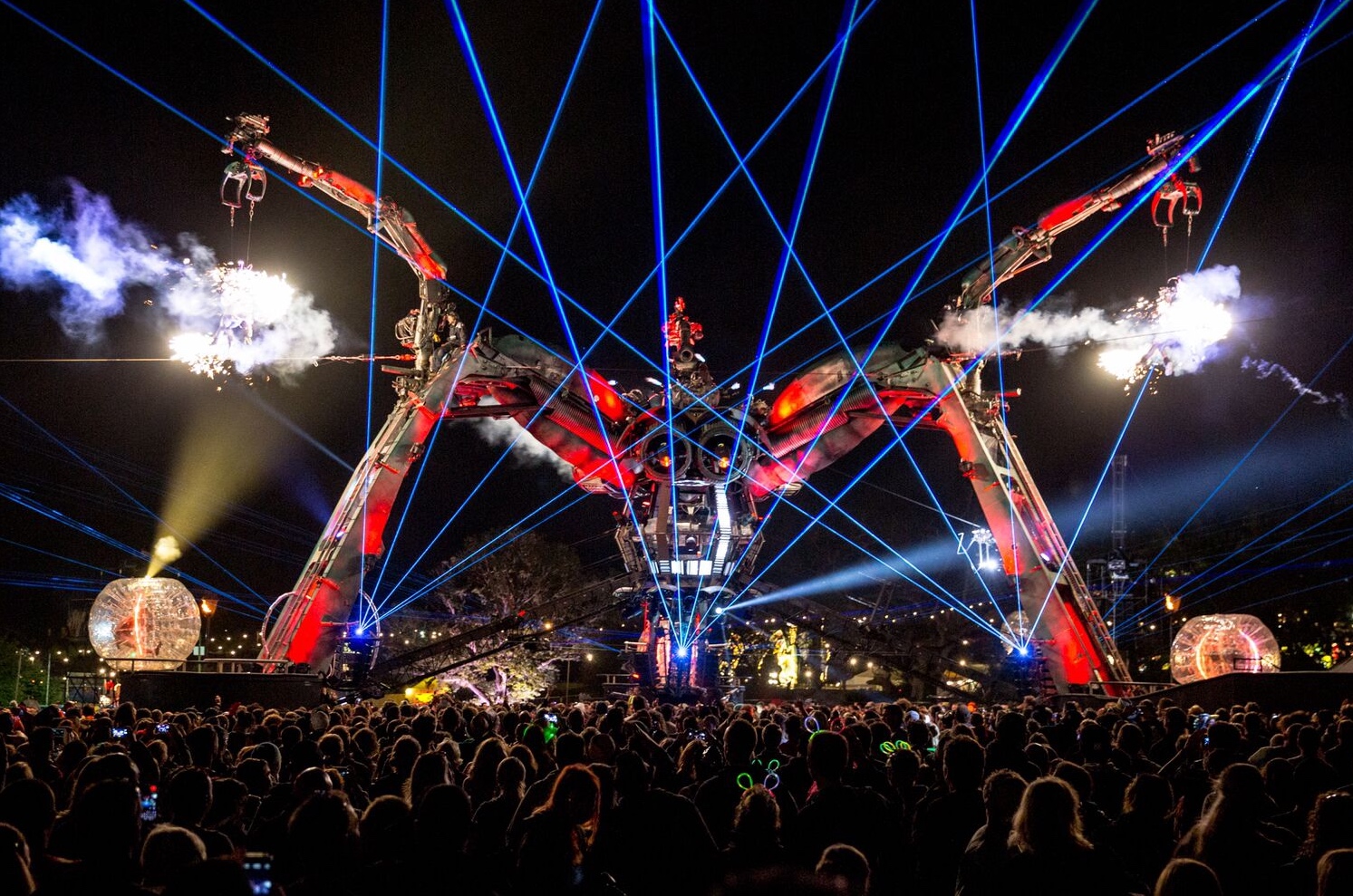 “When people come onboard and come and play, it’s not all about them.”
Bert Cole, Arcadia

That year, Rush and Cole were both at Monegros, a dance and electronic music festival in the deserts of Aragón. Pip Rush was there making sculptures “and doing lots of visual stuff”, while Bertie was there with a whole other crew making “ginormous tensile structures” of his own. They did a little work together that by Rush’s account involved “some pretty extreme rigging”.

“One morning we sat by a campfire looking at all these people and all this different mad stuff that was going on around the place,” says Rush. “We had a stage at one end of the field and all this creative, crazy stuff at the other end, and we just sat and looked at the stage and decided that the stage was the most boring thing we’d ever seen.

“So we decided to try and bring the whole thing together and make a stage that was also a sculpture and centrepiece for loads of different people to collaborate, whether that be sculptors, painters, performers, pyrotechnicians – all these different people out there doing different amazing stuff. We decided to bring the whole lot and the music and the DJ and the stage together. And that was the spark of the idea.”

Arcadia was born there and then in the heat of the desert, with a dream to turn a stage into an art installation as “mad” as the music coming out of the speakers. But some of the spirit animating the group goes back nearly two decades earlier to a terraced street in Ladbroke Grove home to 120 people, all with the surname Bramley.

In 1977, Freston Road, W10, was a dilapidated block of houses occupied entirely by squatters, since the previous tenants had been rehoused in modern council blocks. The buildings were cold, unsanitary, and unkempt. The Greater London Council wanted them demolished, but offered no alternatives to the new ad hoc community that had taken residence there. Enter Nicholas Albery.

Albery had once been the custodian of the BIT social information centre (a spinoff from the hippy magazine International Times) and would one day stand (unsuccessfully) as a Green Party candidate and (somewhat more successfully) found the Global Ideas Bank, as well as edit the Time Out Book of Country Walks. Faced with eviction, he called all the residents of Freston Road together, made them watch Passport to Pimlico, and persuaded them they should declare the street an independent free state. The motion was passed unanimously.

Frestonia was an odd sort of utopia. They appointed a two-year-old as Minister for Education, received a letter of support from Tory MP Geoffrey Howe, and the entire population took the same surname (after the neighbouring Bramley Road) and declared themselves one family so the GLC would be forced to rehouse them together in the event it all came to an end. Combat Rock, the bombastic fifth Clash album, was largely recorded on Frestonian soil.

Of all the unruly premises in this most unlikely of Free and Independent Republics, the most notorious was the Apocalypse Hotel. A graffiti-covered shopfront with an interior resembling a bomb site, it was here that the Mutoid Waste Company first began assembling sculptures out of scrap metal. In 1984, a 2000AD fan named Joe Rush had just returned from a summer on the road with the New Age travellers making up the Peace Convoy. He found himself living in the Apocalypse Hotel and set about using the junk from the area’s many car breakers yards to imagine a strange dystopian future in which human beings had become strange, mechanoid mutants.

“Somebody gave us a burned-out bus, and we turned it into this huge skull with eye sockets that you look through to drive,” Rush recalled in an interview with The Idler. Where to go with such a beast of a vehicle? Why, the Glastonbury festival of course.

If Michael Eavis and his security team (a chapter of the Hell’s Angels) did not immediately take kindly to a group of punks crashing their festival without tickets, they were soon convinced when they saw Rush’s sculpture of a centaur on a motorbike built out of old engine parts. Before long they became a regular part of the festival, building such iconic monuments as the famed Car Henge.

Throughout the late 80s and early 90s, the Mutoid Waste Company played a pivotal role in the emerging warehouse rave scene, collaborating with sound systems like Spiral Tribe and building vast mechanical beasts and cyberpunk structures out of scrap metal at free parties throughout the UK. But after a series of violent conflicts that saw Rush being set on fire and hospitalised, the Mutoids left for Europe.

Today, Rush is active in the UK once more but not in the free party scene, rather as a respected sculptor, commissioned to participate in events like the closing ceremony of the 2012 Paralympics. He’s also kept up his association with Glastonbury. In 2007, invited by Eavis to create a Trash City for that year’s festival, Joe invited his younger brother Pip to bring his Arcadia Spectacular along.

Pip Rush’s earliest memory of being at any music festival is from Glastonbury and involves his big brother. Pip was still a child at the time. “I don’t know how old I was,” he told me. “All I remember is seeing my brother standing on a car on its end, banging a drum and shouting through a traffic cone to start the show, and then diving off, in front of me, into a pool of mud.” Arguably, Arcadia are upholding something of the Mutoid tradition of hi-tech hedonism and scrap metal sculpture. But this is also a story about how the radical spirit of 1970s and 80s alternative culture, which led first to the free festival movement, later to free parties, rave and acid house, has been transformed into the very different spirit of today’s music festivals. 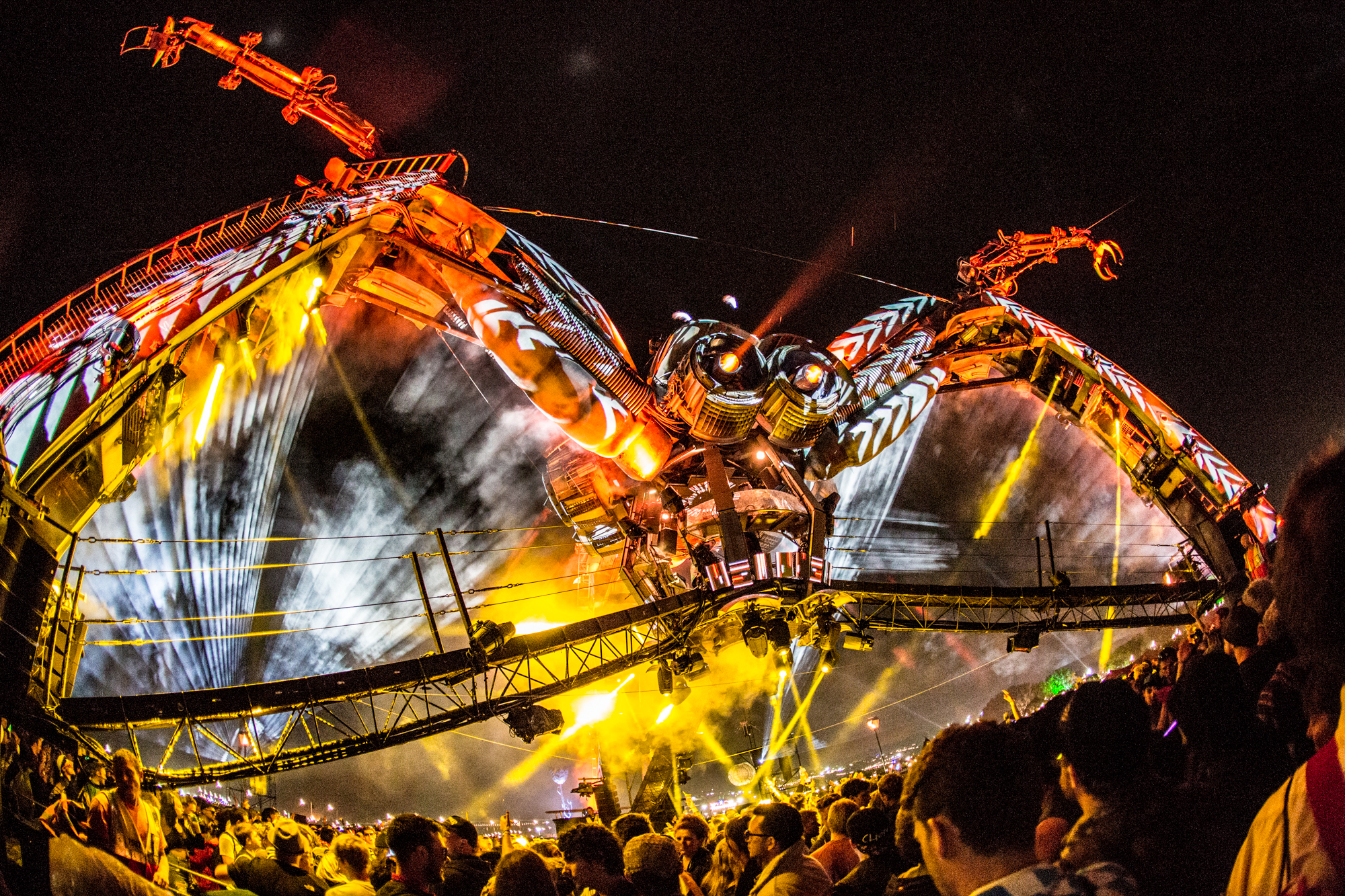 “Humans have always wanted to gather together, whether it’s round a campfire or on a bigger scale.”
Bert Cole, Arcadia

When I ask about the the political meanings they hope to convey through their repurposing of old military vehicles, Cole answers uncertainly. “We understand that it’s got political connotations,” he says, but for the most part they were motivated simply to find “the best, sexiest scrap you can find.” Rush is scarcely more forthcoming. They “didn’t really feel very good” about the war on Iraq, he tells me, and were happy to be given the opportunity to “do something really positive” with some of the material that came back from there. “We have strong beliefs [but] we’d rather lead by example,” he says.

“I think, politically, when the Mutoids were doing their thing in the Thatcher era and stuff, there was a very different system in place to what there is now,” Rush adds. “Personally, I think a lot of people at those free parties are probably now – some of them – the people making legislation in government, and so they’ve relaxed the laws on festivals a hell of a lot. It’s amazing what you can do now. I think there’s been an evolution and a shift since then. The doors have opened and it’s amazing what’s burst through it.”

Maybe he’s right. What remains clear is that, even on a formal level, Arcadia is doing something to counteract the dominance of the superstar DJs and their superstar egos – simply by building performance spaces which encourage dancers to look inwards, at each other, instead of up and forwards at the performer on stage. As Bert Cole puts it, “when people come onboard and come and play, it’s not all about them. They are stepping into an environment where they are an element and there are lots of other elements all playing together. In order for the experience to be the best it can be, all those different elements need to jam together.”

“It’s interesting that he, of all people, doesn’t quite get it,” Cole says. “We gave him a slot at Glastonbury last year. I love his music, but it definitely wasn’t animated and he definitely didn’t step up and get involved in the show.”

Rush concurs. “I think ultimately our drive and passion is about unity and is about getting a lot of people together to have a really good time and to really enjoy being together as a bunch of people. We, as artists, are there to facilitate everyone having that good time and to be part of that experience as well. I guess what Seth is saying is, from his angle, it’s more about him as an artist, displaying his artwork and other people coming and appreciating it. Which is fine. But I guess that’s a slightly different world to the world that we’re creating.”

Troxler worried that the spectacle was betraying the spirit of dance music. He wanted a return to what he saw as the original values of “respect, being positive, communal unity.” But perhaps the poison is the cure. Maybe one path back to the communal unity that clubbing was built on is through the dramatic spectacles, feasts for all the senses which groups like Arcadia are promoting.

“Humans have always wanted to gather together, whether it’s round a campfire or on a bigger scale,” Cole says. “If you go to a normal concert, you just look at the back of people’s heads and up at the stage. But with us, everyone’s illuminated with fire and you can see everyone because everyone is facing into the middle. I think that is something really important for people to come and experience.”

Read this next: Glastonbury is a rabid, filthy, depraved hypercapitalist clusterfuck – and an absolutely staggering achievement.