As Donetsk Airport was captured by Russian-backed Ukranian rebels, the Ukranian government made its symbolic last stand with the remaining few forces it had in the area, described by the Ukranian media as the “Donetsk Cyborgs”. Whipple immersed himself in all angles of the conflict he could find across the media and the internet, from the reporting on Russian television to the videos uploaded from the mobile phones of soldiers on the ground. The experience of being totally immersed in the feed and trying to decode differing points of view left him feeling understandably overloaded.

“We’re living in a weird era right now, this second coming of geopolitics. It’s almost like the 19th century. It’s not the 90s, it’s not an ‘end of history’ thing – suddenly we’re back to the world being divided into different factions,” he explains from his home in Berlin. “I feel this kind of moral ambivalence and weirdness in the atmosphere right now. Politically it’s just not enough to demonise one thing before another thing – everything just feels so compromised right now. Something could pop up in your feed that’s this really invigorating great piece of progressive news, then you dig a little deeper and it’s some group that’s trying to undermine something by feeding it into the media.” 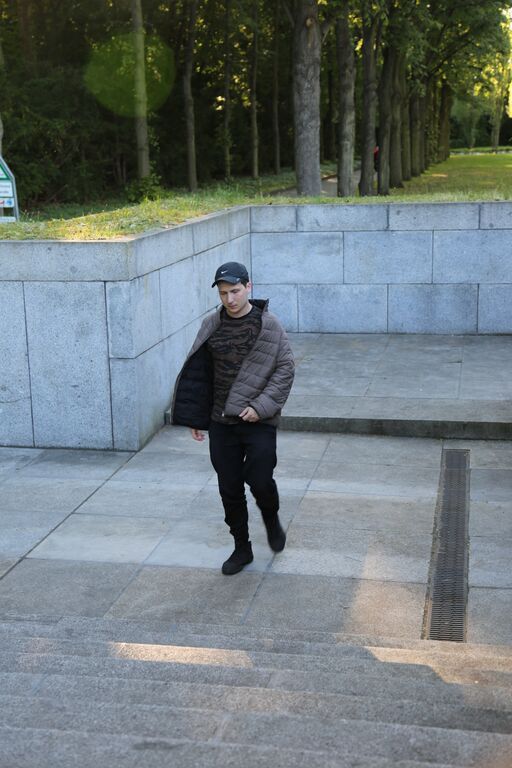 “If I had some kind of ideological agenda I wouldn’t make music.”M.E.S.H.

It’s not the kind of anxiety you’d expect to seep into the debut album of a producer commonly associated with club music. As M.E.S.H., Whipple has spent years dicing up the vocabulary of commercial dance sounds and reassembling the pieces into unusual structures, and his artist name perfectly encapsulates both the collage-like nature of his music and the sinewy fusion of technology and flesh it resembles. His sound is as hard as steel and moves with the jerky motion of an assembly line robot, yet underneath the shiny surface is something disturbingly sentient. There’s never been more talk of producers tearing up the rulebook when it comes to club music, but nobody is really making anything quite like him. It’s not a nightclub’s Funktion 1 soundsystem Whipple’s sound needs to be appreciated, it’s a THX cinema setup.

For the past few years Whipple has been a resident of Berlin’s anything-goes Janus parties, memorably described by co-founder Dan DeNorch last year as being home to “a sound that doesn’t exist”. Piteous Gate, however, is a project largely approached outside of the mindset of the club. Rather than a record made in the midst of constructing edits and tools for Janus parties as his PAN release Scythians was last year, Whipple made the decision to sit down and make an album over a dedicated period of a few months last winter. The result is an album that showcases his love for the dramatic and the theatrical alongside something much more introspective, a product of reading, writing and thinking more than it is time spent in the club.

Whipple’s unique sound comes from years spent working in isolation. Growing up in California as a teenager, some of the only electronic music he could get his hands on was the early IDM of Warp – most notably Autechre. The strange structures and melodies of that era are undeniably present in his music, but his is a sound that also absorbs the rough texture of industrial music and commercial genres, most notably hardstyle. Early on he was drawn to what he describes as “the polish and theatrical aspect of big sounds” – particularly the presets found in Fruity Loops, which he talks about like a visual artist would talk about selecting the kind of paint to use on a canvas. “It’s not really the irony value of these ugly sounds or that I have an ideological fixation with presets because they’re more democratic,” Whipple explains. “I just enjoy the smorgasbord of amazing digital synthesizers you get when you open up Fruity Loops. Each preset has something like 15 oscillators and four built-in effects chains – it’s using the full space of what digital sound can be.”

“It’s like I saw the frame and I had a sense of what sounds I wanted on the record.”M.E.S.H.

Whipple doesn’t use Fruity Loops (or FL Studio) very much any more, but that love of big sounds remains, and in writing Piteous Gate, he decided to craft his own collection of presets to build the album’s striking palette. The painstaking process took several weeks, and involved him letting each synthesizer oscillate slowly and listening until he heard a sound he liked. “I’d do that again and again to build up these instruments, and I’d do the same with effects chains. It was like building up a little architecture with the effects chains, with the instruments being characters within that architecture,” he explains. Whipple also acted as a kind of art director. “Unlike a lot of things I’ve done, I knew how I wanted it to sound. I knew there would be this warmth there, but it was kind of a warmth on a smoggy day. If Scythians is teal and turquoise, this record is orange, brown and amber. Not to get into pretentious territory, but I really had a sense of the sound stage. I don’t know what else to call it. It’s like I saw the frame and I had a sense of what sounds I wanted on the record.”

Once the sounds were assembled, Whipple made the album in a concentrated period of time, “so that the ideas in it weren’t convoluted and it didn’t become a huge process of editing and struggling” over what he wanted to say. While he apologises for the “pretentious” terms in which he describes his music, it’s hard not to get swept up in his theatre analogy. Piteous Gate might be an album of high-concept, futuristic sounds, but tracks like ‘The Black Pill’ and ‘Jester’s Visage’ feature Renaissance-type instruments that make you feel as if you’re watching a Shakespeare play in an Elizabethan theatre. It feels like a conscious reaction against what he describes as the “banal sort of dialectic between organic and raw sounds and hi-tech and futuristic sounds” that’s a current source of discussion in underground club music. “I’ve never been so hands-on and earthy and organic about messing with sounds as I have on this record just because it felt that the musical ideas called for it,” he explains.

There’s an impressionistic feel to the way Piteous Gate has been constructed. Whipple might describe the process of creating the album’s sounds as “an arbitrary constraint” to facilitate a speedy production process, but the effect it creates is more the feeling of looking at a painting than listening to an album – one that not even he is sure how to describe. He tentatively describes it as a “weird mix of a DeviantArt sci-fi cityscape mixed with like a steampunk invention,” but is hesitant to go any further because there’s a lot that he doesn’t even appreciate yet. “I feel sometimes with electronic music it’s easy to overload the listener with these details,” he explains. “There’s stuff there for repeat listens and there’s stuff underneath that I know is there, but it’s not necessary for me to have that be a selling point I’d talk about in the press release or something like that. I just like music that feels really worked on. I almost feel guilty about making anything, because there’s just so much music. So when I make music I feel like I need it to be not just be some cool sounds that I’ve made. It is a dumb little story, it is a dumb little one act play – a narrative is there, for sure.” 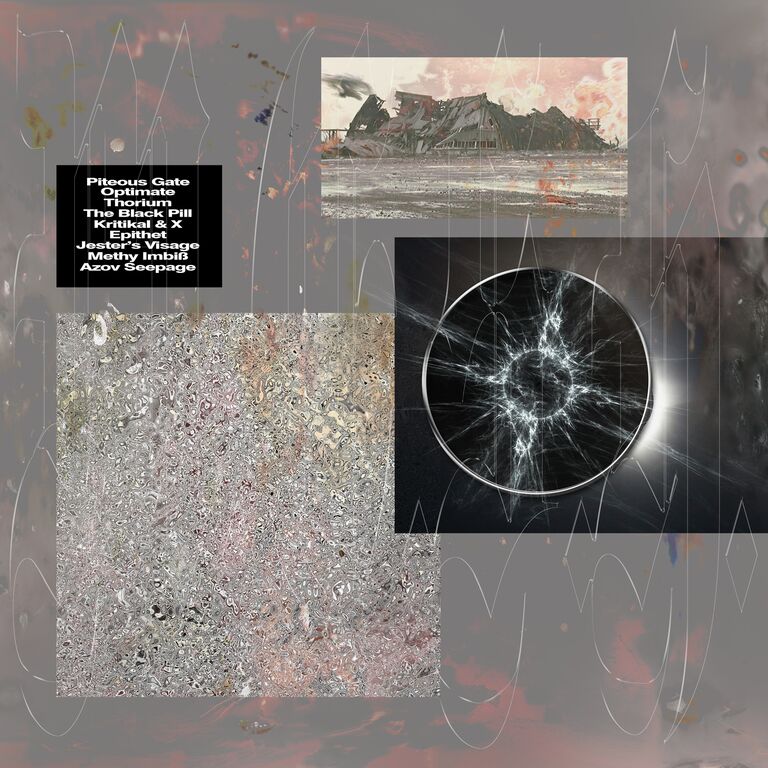 “For me this record is more of a reflection of a sensibility as opposed to a discrete statement.”M.E.S.H.

Whipple is reluctant to reveal too much of what the loose narrative is about. The album’s name refers to a scene in a science-fiction fantasy novel called The Shadow of the Torturer, written by Gene Wolfe and published in 1980, and it would be tempting to see Piteous Gate as an attempt at creating an abstract vista based on Wolfe’s books, but using it as inspiration for the name feels like a bit of a red herring. Instead, that choice seems to be related to the confusion created by the book’s unreliable narrator and dense language, a reference perhaps to the information overload anxiety that was occurring as he was writing the album.

An image of the ruined Donetsk Airport might appear on the cover of the Piteous Gate, but Whipple is reluctant to attach any particular political message to the album. “It wasn’t like ‘I have to make this record because of X, Y and Z,’” he explains. “If I had some kind of ideological agenda I wouldn’t make music – I’m a very political person, but for me this goes into much different territory. I think music is something very different. I think music is just something strange and from a different planet. I’m not trying to take the stand of the apolitical white dude, but for me this record is more of a reflection of a sensibility as opposed to a discrete statement.”

However Whipple may feel, Piteous Gate is a groundbreaking album in the way it responds to our interconnected world. Even if he’s not attempting to engage with broader themes, the cumulative effect global media and social media has on our mental states is just as important a topic to explore, even if it may not be immediately obvious. “I want to see and feel the world as it is, whether it’s the darkness of it, or the starkness of it, or whether it’s the amazingness of it,” he explains. “I want that to be in my music, because I’m a receptor for constant information overload. And I want to reflect that in an honest way. I think that maybe a lot of my mental state at the time shows up in a process of sublimation through the record. It’s less that there’s an agenda – it’s a reflection of a mental environment.”

Piteous Gate is released on PAN on July 17.