“It’s warts and all”: How a spontaneous recording became Micachu and the Shapes’ new album

One afternoon last winter, old friends Mica Levi, Raisa Khan and Marc Pell decided to hire a rehearsal studio for a few hours rather than sit in the pub.

Marc brought along his pocket-sized recorder to capture the jam, as usual. (“It’s just so I can listen back and think, oh, you need to practise your paradiddles,” he says. “I don’t know why I record stuff all the time, I never listen to it.”) When they walked back onto Kingsland Road that evening, they didn’t realise they had just recorded the third Micachu and the Shapes album.

Good Sad Happy Bad arrives six years after the London trio, who met as students at Guildhall School of Music and Drama, released their debut album Jewellery, a hotchpotch of stop-starting beats and catchy pop fragments stitched together from lo-fi drum loops, scratchy guitars and vacuum cleaner drones. At the time, Rough Trade’s newest signings were recognised for their lopsided poppy invention, charming some critics and mystifying others. But though there have always been pop overtones to the Shapes’ cocktail of punk, indie, hip-hop and avant-garde exploration, they’ve tended to confound expectations rather than reinforce them in the years since. After Jewellery, the band put their academic training to use on the ridiculously ambitious Chopped & Screwed, an experiment with the London Sinfionetta inspired by the syrup-addled sound of Houston’s DJ Screw, which saw string players scraping, grinding and tapping their instruments while the Shapes hammered away at homemade contraptions and dragged the tempo down to a narcotic trudge.

The next album, 2012’s underrated Never, was a slight return to the scrappy, loop-and-paste world of Jewellery with a darker edge, but Good Sad Happy Bad, out on September 11 through Rough Trade, is a different beast: a defiantly open-ended, unvarnished project that lays bare the band’s unique creative chemistry. 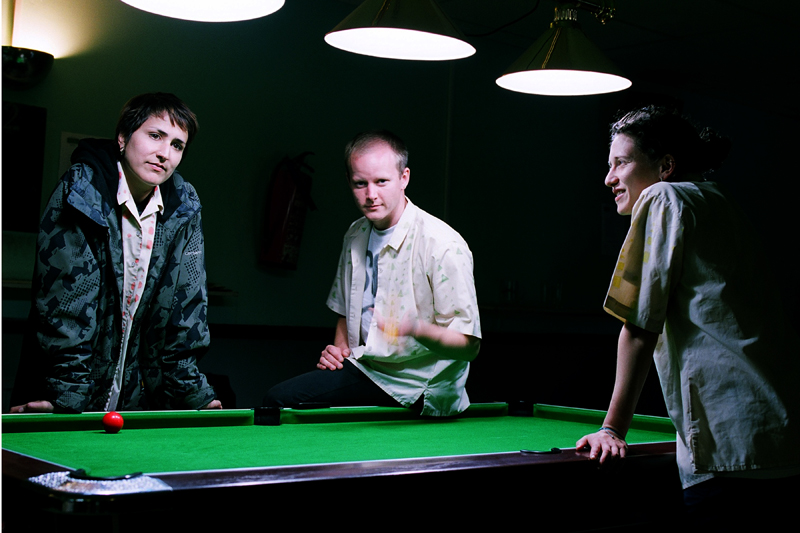 “It’s warts and all. We were more interested in getting the reality of performance”
Mica Levi

After their impromptu session at the rehearsal studio, Marc sent his single-track recording to Mica, who realised they’d nailed something special. “I listened to it on the bus and I was like, yeah, [nodding her head] some of this is alright! I put it on the computer and started singing over bits to show Marc and Raisa, and that actually just became the way we did it.”

If the album comes off as a happy accident, it’s the opposite in nearly every way to the music that has gained Mica renown as a solo artist and composer. Her bewitching score for Jonathan Glazer’s Under The Skin, which was nominated for a BAFTA in April, brought her unconventional approach to orchestral music to a new fanbase, including Demdike Stare, who released a cassette of her slippery solo explorations on their DDS label late last year. In 2013 she became the youngest ever artist-in-residence at the Southbank Centre, and this year a work for 12 strings titled Greezy had its premiere as part of the institution’s Spectrum of Sound series. (“I actually missed it,” she admits, sheepishly. “I was there but then I missed it cos, um, I went through the wrong door.”)

With these projects – on which Mica has managed to make the avant-garde feel unpretentious and accessible, blurring the divisions between classical music and the rest – her ideas are typically well developed before they’re ever performed. “[Under The Skin] was pretty much recorded on a computer, but then later on I had to write it out so other people could play it,” she explains. In contrast, the Shapes “do it by memory and by ears where we can. The songs get shorter and shorter as we get older and older!”

While Mica was engrossed in solo work, the other Shapes were dividing their time between music and, well, real life. In 2013, Raisa put out a solo EP, Feeder, and a mixtape with Evian Cafun as MOLLY while “cooking on the side”, as she puts it (her self-effacing manner suggests it’s more than just a hobby). Marc busied himself with production work and formed MAXIXE with Darren Bancroft of We Have Band, whom he met while drumming for the Manchester trio, as well as “decorating and plumbing, plastering, learning life skills like that.”

“But over the years, even though we haven’t been releasing anything, we have been playing,” says Mica. They hadn’t planned to start work on an album when they went into the rehearsal room that day, adds Raisa, “we got together to just play instead of having a drink in the pub. Marc recorded it on an Edirol [a palm-sized recorder made by Roland] ‘cos it’s a good way of remembering – if you can’t remember the song it’s there so you can learn it again. And then he liked the sound of them and he sent them to us, and Mica just sang on top of them.”

As with the band’s previous albums, Mica’s lyrics and song titles are compact and unshowy, dealing in quotidian moments: “I like relaxing, taking all of it in”; “Breathe in the sea air”; “I’ll be watching and waiting and thinking and yearning”. As much meaning seems to be contained in her delivery – cracked, mumbled, strained, at times almost defiantly ugly – as in the words themselves. Does she spend a long time working on the lyrics?

“God, it’s hard to remember now. If it ever was like that it wasn’t very successful, actually, and probably didn’t make it. The ones that were better were a couple of days of karaoke, quite constantly, in my bedroom. But I wrote a lot of the lyrics [separately] to the songs, and then I sang them out.” 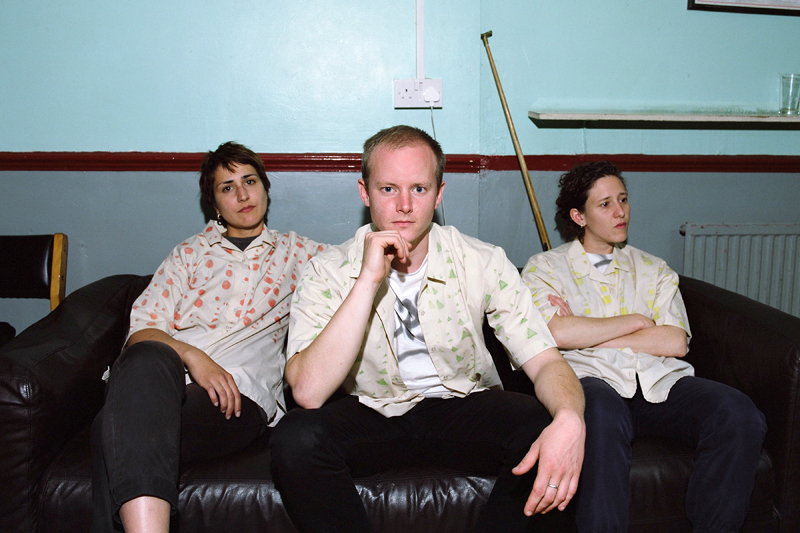 “This was just us hanging out, playing, and just leaving it on record”
Marc Pell

In terms of instruments, their set-up is more stripped back than ever, eschewing the vacuum cleaners and adapted guitars that characterised the homespun sound of the debut for a simple drums, keys and guitars combination; on some tracks Mica only contributes her voice. Were they ever tempted to re-record the songs in a more traditional studio set-up?

“We did go through that process but it just didn’t work,” says Raisa.

“It sounded shit,” adds Mica. “It’s also more real. I was trying to describe it to someone the other day, but say you saw someone, like, tearing through a wall – if a man runs through this wall right here, that would be amazing right? And if you saw it filmed in HD you’d be like, ‘wow’, but if you saw it on someone’s phone you’d think ‘fucking hell!’ It’s more impressive because you know it’s real and it’s a chance thing. And that’s sort of the approach to recording – it’s warts and all. You [can] spend a lot of time in the studio trying to warm things up and make them sound like that. We were more interested in getting the reality of performance.”

Some of the songs were pieced together from short loops while others were built on longer jams, but once the sections were arranged and Mica’s vocals added, there was little else to be done.

“We haven’t had any arguments about ‘there’s not enough kick drum in that’, ‘cos obviously there’s nothing we can do about that,” says Mica. “Mixing wasn’t an option, ‘cos it’s a stereo track. It’s like you asking to turn Raisa up in this recording when you get home.” It’s a time-saver, too. “Yeah, exactly. The time was just [spent] rummaging through all the bits and thinking which songs do we like.”

The result is their most direct and stripped back album yet. The vacuum cleaners and bric-a-brac embellishments are gone, leaving the band’s freshly improvised pop fragments to shine unadorned. ‘Oh Baby’, the first single, is the prettiest of them, a lo-fi lullaby that places Mica’s voice front and centre. Others are more like sketches, with the meandering melody of ‘Unity’ given a hiding by Mica’s sickly extreme metal screams (“Somebody asked if there was a pig in the recording. We whittled it down and we realised that was me,” smiles Mica). ‘Thinking It’ channels the fractious DIY energy of The Raincoats to frame a daydreaming monologue by Raisa: “I went for a run this morning / It wasn’t the best, I didn’t feel very strong / Kind of limped my way through it / But at least I did it.” Often it sounds like they’re pursuing a philosophy of ‘first thought, best thought’ as an attempt to strip out everything but the initial spark of creativity, to try to identify and expose the exact moment where the chemistry happens. In that sense, it’s a brave record: uncensored and unrepeatable.

“The tracks are a mix of so many different things, like the sound of the room, the way we were playing them – the sound is the hardest to recreate,” says Marc. “You’ve got to remember this was just us hanging out, playing, and just leaving it on record. So those moments were gone.”

Their next job was figuring out how to perform the songs again. “It’s been quite odd trying to learn some of them. We have to do really different versions of a lot of them,” say Mica. They’ve done “loads” of gigs so far, she laughs, “but we’re still working it out!”

Last week the band played to hundred-strong crowd at Bold Tendencies, a makeshift venue at the top of a multi-storey carpark in Peckham, and the album took on a very different character. Live, Mica’s voice is more nonchalant and ragged than ever, but deceptively controlled, while ‘Sea Air’ becomes a rock dirge driven by a heavy, swaddled guitar tone; squint a bit, and they could almost be teenage punks rehearsing in their parents’ garage. The sound system isn’t kind to the nuances of the record, but you can still sense how freeing it is for them to play these strangely exposing songs in front of a live audience.

When it’s become so easy to record an album on a computer, sanding down all the rough edges along the way, it’s pleasantly jarring to hear a band reveal their inner workings. “If it had been the situation where we’d gone into that jam and we were all plugged in to amazing recording equipment and we’d produced a lot of music that we liked, we’d probably be using that. But then again it was good because we were like, ‘This is what we’ve got.’ We had to go with the material as opposed to putting a load of ideas on it,” says Mica. “We feel like this record reflects the way our band works best.”

Tags: Micachu and the Shapes

Stream Never, the fantastic new album from Micachu And The Shapes