Patterning: The iPad drum machine that wants us to think in circles

There may have been many leaps in music technology over the past few decades, but for the most part we’re still wedded to the idea of music composition as a linear process.

Take Ableton Live’s Session View for example. Its interface may have freed us from the tyranny of having to arrange sequences in a row when making music with a computer, but it still requires us to create discrete chunks of music that rely on a left-to-right timeline. Bass drums, snares and hi-hats are all represented by repeating staircases of marks on a grid that don’t lend themselves to easy manipulation.

Released on iPad last week, Patterning wants us to think of rhythm creation as a circular concept. It isn’t the first example of hardware or software using circles instead of blocks for creating music, but it could well be one of the best. It’s a drum machine app that uses a simple and ingenious interface, letting you apply percussion sounds to one of eight concentric circles divided into segments. To add a beat, tap the segment; if you want a higher velocity swipe out towards the edge of the circle, if you want it lower then swipe in towards the centre. I don’t think I realised just how much my brain needed a circular interface for making beats until I used one.

“I try to think of what I’m doing as building musical instruments rather than as building apps.”
Ben Kamen

Patterning was developed by Ben Kamen, whose Olympia Noise Co. has been responsible for some of the iPad’s most unique music production apps. The 2012 app Chordion for example allows you to play whole chords with one finger and play melodies with another, without the possibility of hitting a wrong note. dot Melody on the other hand is a “multidimensional” graphic arpeggiator, sequencer and drum machine. Like those earlier apps, Patterning utilises a visual feedback system that makes the musical process much less oblique. It’s an effortlessly elegant solution, which is surprising considering Kamen’s limited coding experience.

“Programming is a perpetually humbling learning experience,” Kamen tells me via email. “I made Chordion when I was first learning to code. It took me about two years to make that app, and I went from knowing almost nothing about programming to having to navigate some pretty esoteric corners of iOS development. After I finished dot Melody I had a lot of ideas I wanted to pursue but I was really aware of my limitations as a programmer. So I came up with a list of apps I wanted to make and ordered them in a way such that working on one would develop skills to facilitate the next app and so on, building up a library of code that could be incorporated into multiple apps. Ondes (a theremin-inspired instrument) was the first app in that process, and Patterning the second.”

Though Kamen’s apps rely on touchscreen technology, much of his initial inspiration comes from experimenting with his hardware modular setup. “I think that working with modular synths taps into a certain mode of music making that’s very immersive and rewards being present,” Kamen says. “You’re simultaneously using your ears to listen while using your brain to think the interactions of the modules. And then you can sit back and listen to what’s happening, and adjust things, and listen. I think about tapping into that experiential aspect of modular synths when I’m designing apps.” 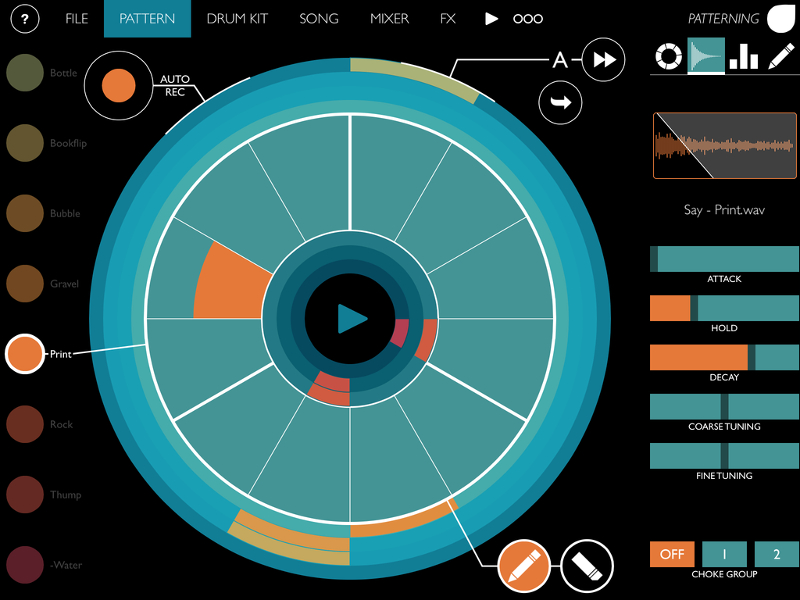 It’s easy to imagine Patterning as a Eurorack module. It has all the features you’d expect from a software drum machine, including mixer, effects and a “song mode” for laying out drum tracks in the traditional manner, but it also contains some more unusual features that seem inspired by his experiences with offbeat Eurorack modules. There’s the Euclidean mode for example, which lets you divide each percussion circle into different numbers of steps to create complex polyrhythms, and the innovative “auto-rotate” feature, which turns a selected track back or forward a certain number of steps with each rotation. You can reverse the direction of the loop, or even make it swing like a pendulum. These are things you can do in Live with the right tools, but Patterning does it in a way that feels much easier to grasp.

It isn’t just modular gear that influences what Kamen does. “All of my apps start with musical ideas, with thinking about music theory and composition and figuring out how to make an interface that facilitates the exploration of those ideas,” he says. The “auto-rotate” mode for example he says is inspired by the rules of Steve Reich’s process piece Clapping Music, which also allows for simultaneous loops of different lengths. Kamen first integrated this idea into one of several software drum machines he’s made with the visual programming language Max/MSP since 2002, which has now been integrated into Patterning’s design. “I got really into setting up super sparse 808 loops of different lengths and just listening to the patterns unfold over a long time,” he notes of its genesis.

Patterning might have an innovative interface, but without decent drums it would be little more than a fancy sequencer. As it is, it’s got a brilliant selection of kits included. As well as the obligatory 808 and 909 clones, there’s a squawking digital kit with the name “Calculator”, a kit comprised of bubble popping and droplet sounds called “Liquid”, and a pair of “Modular” kits presumably recorded straight from Kamen’s Eurorack; in each case they’re the kind of sounds you wouldn’t hesitate to use in a production. Kamen has also got a diverse selection of other artists to create kits, some of which take Patterning away from the realm of simple drum machine and into the area of being more of an instrument. Take Rodrigo Costanzo’s “Old Bells” for instance, which turn Patterning into a wind chime generator.

“I have a pretty broad definition of what a “drum kit” is in the context of the app,” Kamen explains of how asked artists to create sounds. “I would tell people making kits to give me eight sounds that “sounded good together” rather than making a kick, snare, etc. Most people who make beats have a huge library of 808s and such, so it seemed like a good idea to focus more energy on unique sounds.” If the included kits aren’t to your taste, then Patterning will allow you to import your own samples and trim them down to size in-app, apply filters and even record automation for each bar.

For some however, there will be nothing comparable to the sound or hands-on feel of a hardware drum machine. For those people, Patterning also sends and receives MIDI messages, making it possible to connect any MIDI-capable drum machine (as long as you have a connector like the iRig MIDI 2). I had my Roland AIRA TR-8 set up in minutes, though Patterning’s limitation of eight drum tracks meant I couldn’t make use of all eleven drum sounds. Despite this minor criticism, it’s already a more enjoyable option than hooking up Ableton to send drum patterns to the TR-8. That ease of use is unsurprising considering how important the integration of hardware and software is key to Kamen as an app designer.

“I try to think of what I’m doing as building musical instruments rather than as building apps,” he says. “I want people to perform with them and to write with them, and hopefully they become a part of people’s studio setups and performances the way other instruments do. One thing that I think is interesting is that a huge part of the apps and hardware interacting at the moment is MIDI, which has been around for 30 years, so I’m not sure it’s really even about the future as much as it is people recognising how useful MIDI is and how it’s bridging a generation gap between new and old gear.” 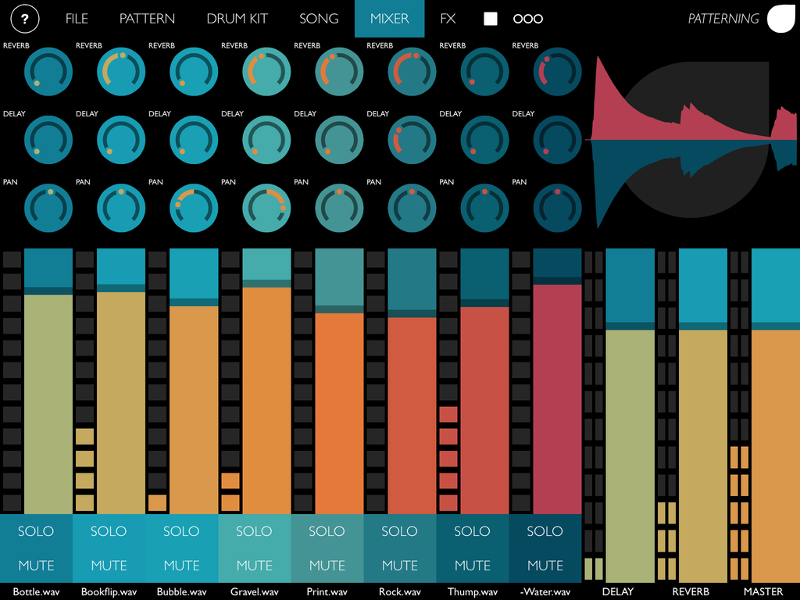 “I went from knowing almost nothing about programming to navigating some pretty esoteric corners of iOS development.”
Ben Kamen

In its current form, Patterning is great, but it isn’t perfect. Sequencing beats within a single bar is intuitive, but switching to a different loop still requires scrolling through a conventional list, limiting your performance options somewhat. The need to switch to different pages for the mixer and effects too can be a little frustrating, but that’s more a limitation of the format of the iPad itself. Kamen is well aware of some of Patterning’s limitations, and is planning on refining the app in the near future.

“There are a handful of “hidden” features that exist in the code but have no user interface yet that I’d like to sort out,” Kamen explains. “And I’d love to put in some more ways of generating and manipulating patterns. I’ve probably gotten about a hundred feature requests in the past two days, which is great. Some of the most pressing things to work on are workflow features that are kind of boring but can make a big difference in the app’s usefulness – the most obvious example is the ability to export audio loops so that it’s easier to move from Patterning into a DAW.” Some of the features of Patterning, Kamen promises, will end up in the second version of Chordion, which he is building from the ground up. “In a certain sense, Patterning is really a part of the process of making the next version of Chordion,” he tells me, “which is going to be completely re-written from scratch.”

Like all iPad apps, the lack of velocity-sensitive drum pads means means Patterning is unlikely to replace the MPC or Maschine as a performance tool. However, I’ve probably created more unusual rhythms in my few days with Patterning than my years with any traditional drum machine or sequencer. Like Kamen’s other apps, Patterning isn’t just trying to recreate a conventional interface for a touchscreen format – he’s designed a new one that couldn’t exist easily in conventional hardware or software. Strangely enough, Kamen tells me he’s never owned a hardware drum machine, but Patterning has made the process of drawing beats into a sequencer fun – a feeling I’ve rarely felt in my years of laboriously tweaking beats with a mouse in Live.

Patterning is available for iPad from the App Store.