Powell responds to Steve Albini billboard furore: “It wasn’t supposed to go like this”

“What would you rather? A billboard with my face on it? That would be beautiful, sure, but dull.”

Anyone who knows Powell’s music will probably have had a chuckle reading Steve Albini’s vitriolic rant against electronic music, in which he claimed to be “against what you’re into, and an enemy of where you come from.” Comparing good ol’ electronic acts like Suicide, DAF and Cabaret Voltaire to those who later “co-opted” that music and ruined it is a dud comparison if you know the kind of industrial-influenced aggro-dance that Powell makes.

But, this being the internet, the whole episode blew up, with Spin even suggesting that Powell’s billboard ad was done to “spite” Albini.

Powell has since written back to his Big Black hero to explain the situation, as he told The Quietus: “I emailed him yesterday to say ‘just for the record it wasn’t supposed to go like this, but it’s funny and I’m doing it because I love you’ and he said ‘don’t worry, I totally understand and appreciate the fact that you love my music’.

“It wasn’t like I’d made this track and wanted someone famous on it, the sample process is totally organic when I’m making music.”

He added: “[The email] made me laugh and he was saying things that I believe about music, so [the billboard] was a chance to say something about the state of electronic music and see what people thought about it.

Powell also pointed out that the controversial billboard was surely better than the alternative. “What would you rather? A billboard with my face on it? That would be beautiful, sure, but dull.” 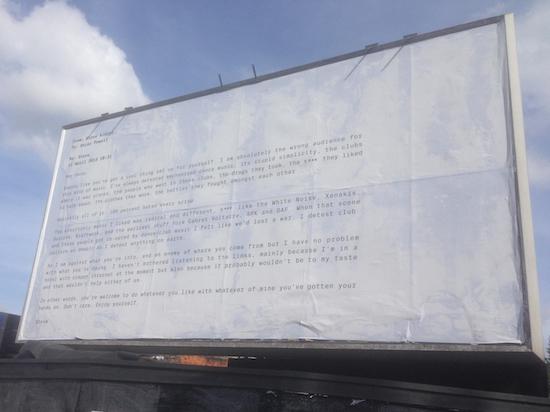