This video from Aisha Devi and Tianzhuo Chen is a mind-trip of mystical symbolism that draws from Hinduism and Buddhism, hip-hop and bondage and more as dance turns to ritual and back again.

Lana Del Rey gets back to basics on Honeymoon, and the video for ‘Music’ returns to the 8mm kitsch of her breakthrough videos — but with higher production values. The camera rolls as Lana plays underwater and relaxes in her secret garden, California dreaming about ballers and skaters.

Arca and Jesse Kanda’s latest collaboration trades animation for reality without losing any of the haunting body horror that has defined their previous videos.

New York producer-DJ Nire joins forces with Maluca and Nani Castle, bringing their ‘Commie Mommie’ revolution across the city: “‘Commie Mommie’ is an inclusive platform for women to express their anger, activism, humor & femininity,” writes Nire. “Any woman can be a Commie Mommie!”

The artist formerly-known-as Princess Nokia celebrates New York City’s Black and Latino communities with a nostalgic video that lives up to its old-school title.

The song of the summer finally has a video. As with the song, Young Thug (and to a lesser extent, Popcaan) is the star as Jamie DJs a gig and bikini babes chill by the pool.

Tyler directed this striking clip that sees him go from whiteface to blackface, survive a lynching and both run from and preach to black people. Then the channel changes and we’re on the set of a throwback bandstand show. As controversy-courting and ADD-addled as ever.

Nick Catchdubs and ShowYouSuck are a modern day Beavis and Butthead in this bad trip that owes plenty to the neon horror of vintage White Zombie — just like ShowYouSuck’s throwback band tee.

In this allegorical video, Aiko plays a “mysterious, time traveling medicine woman” that gives power back to the women of a male-dominated tribe.

The duo formerly known as DJ Dodger Stadium unveil their latest single, cutting through smoke and strobes in this slow-burning clip. 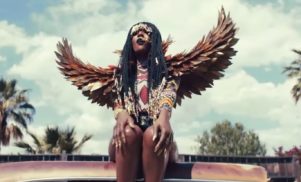 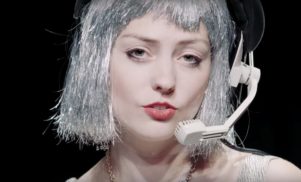