Doug Hream Blunt didn’t start learning the guitar until he was 35 years old.

It was the mid-1980s and he’d been working as a nurse’s aid in San Francisco when he saw an advert for an evening class in Golden Gate Park titled “How To Start A Band”. When he turned up to his first lesson, he was the only person present besides his teacher, Victor Flaviani. As it transpired, Flaviani was actually a drummer rather than a guitarist, and Blunt started to develop an unusual but distinctive playing style under his tuition. Slowly, more and more people started to come to the classes, and Blunt decided to enlist them as his backing band. Together they recorded some of his songs using Flaviani’s garage as a studio and privately pressed up some copies of the resulting album, Gentle Persuasion. Blunt took the album to his nearest record store, Aquarius Records, but never left any contact details and never bothered to check back to see if he’d shifted any or not. The album drifted into obscurity, where it remained for the next 30 years.

It’s an odd story in its own right, but what’s stranger is that, until a few years ago, nobody was really sure if Blunt even existed. His record lacked anything in the way of identifying markers – it didn’t even say what year it came out. His music sounded like it could’ve been recorded at any point between the mid-1970s and the early 2010s: raw, hazy, lo-fi, yet itching with funk, it was hard to tell if Gentle Persuasion was a precursor to the sounds of fellow Californian outsiders like Ariel Pink and DâM-FunK, or someone doing their best impression of them. It certainly didn’t help that an early online mention of Blunt came from the notoriously oblique avant-garde duo Hype Williams, who sampled his song ‘Gentle Persuasion’ on their own 2010 cut ‘Get Choong And Look At The Sky’. 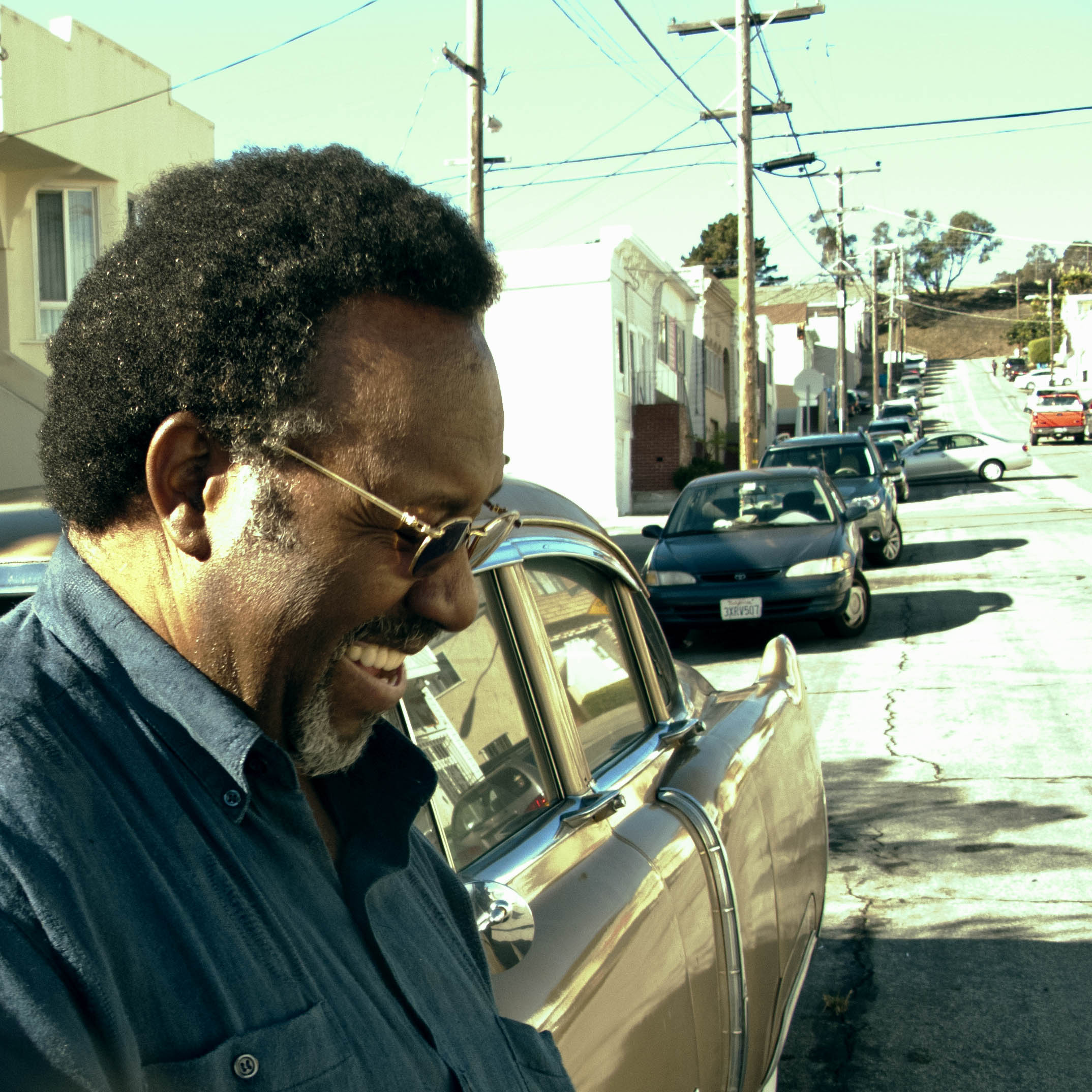 “I was inspired all my life, but I couldn’t afford it!”

“To me, Doug’s music is so out there and different,” explains Eric Welles-Nyström of New York record label Luaka Bop. “It reminds me of lots of things, but then like nothing else. Is this soul? Or funk? Rock? And it’s just so fuzzy and warm and fun! So many things are ‘right’ about it, and so many things are ‘wrong’, which I think makes it so special.”

Luaka Bop’s latest venture is a retrospective of Blunt’s work called My Name Is Doug Hream Blunt. It comes at a time when there’s never been a greater appetite to unearth the work (and the stories) of ‘lost’ musicians, aided by successful reissues of Lewis, Linda Perhacs, and Luaka Bop’s own mammoth retrospective series focusing on Nigerian electronic funk musician William Onyeabor. In Blunt’s case, his cult following has slowly been growing since his music started to circulate on MP3 blogs at the start of the decade, with artists like David Byrne, Devendra Banhart and Ariel Pink (whom Blunt joined onstage in San Francisco earlier this year) all expressing their enthusiasm for his music, and of course Hype Williams, whose Dean Blunt took a healthy dose of inspiration (not to mention a name) from the obscure singer-songwriter.

It’s 10AM in San Francisco when I get through to Blunt on the phone, and he’s just dropped his daughters off at school. The 65-year-old musician has been retired for the past seven or eight years and lives up in Visitacion Valley, “up near the Cow Palace”. A few years ago, he suffered a stroke and is still recovering in his right side. Blunt’s tendency is to speak in one sentence replies, often trailing off midway, but I do learn some of his personal history. He explains how he moved to San Francisco from Arkansas in 1957 when he Bayview-Hunters Point district. “It was kind of rough growing up, but it was alright,” Blunt says. “That was the way it was. You dealt with the situation.” He grew up listening to Ricky Nelson, Elvis Presley, James Brown, The Whispers and The Delfonics, and cites Jimi Hendrix, Santana and B.B. King as his guitar heroes. His mother used to sing around the house, but Blunt never learnt an instrument growing up – as much as he wanted to: “I was inspired all my life, but I couldn’t afford it!” He did take up the bongos and congas when he was about 12 years old, and would sometimes play Fisherman’s Wharf with his twin brother.

Living in San Francisco during the 1960s had a major impact on Blunt. He looks back on the Summer of Love as a significant time in his life, even though he was only 16 or 17 at the time. “A lot of people started doing drugs, but I was in high school then,” he says. “I was more worried about my high school than getting really into it.” Yet it was nearby Berkeley that left the most enduring impression on him and music. “I got a lot of my inspiration from Berkeley,” he says. “Berkeley was like San Francisco in the 60s, only it stayed that way. San Francisco kind of moved on.” Today, he finds the city a different place. “Now it’s more high tech, with cellphones and all this stuff. Everybody has a cellphone in their hands, you know?”

After working as a gardener’s assistant in Jon McClaren Park, Blunt attended community college and worked as a nurse’s aid throughout the 1980s and 1990s. The job helped fund his music classes, although he doesn’t remember when he started attending or even how he first found out about them. It took a few months of practice before he hit Victor Flaviani’s studio, which he’d visit once a week to record. He can’t recall how long it took to lay down the album: “It had to be a long time, but I forget.” Blunt played some of the songs to his patients at the hospital, and around that time performed ‘Ride The Tiger’ on public-access television show City Visions. Considering the ephemerality of those TV shows, it’s remarkable that the footage still exists, depicting a much younger Blunt in a slick cream suit rocking out with his band, who are made up of a vast spread of ages and genders.

The rediscovery of Gentle Persuasion and the shorter Big Top EP came mostly by chance. Some time during the 2000s, one of his records was rediscovered in “a garage sale or a flea market” by the team behind the shadowy OT Records. The label tracked him down and helped him sell the remaining copies of his album, which had been lying around the house. “They hadn’t been out of my garage in years,” Blunt says. While he appreciates that they helped him sell the record, he mentions that he never received any of the money originally agreed with the label (attempts to get in touch with OT Records to confirm this have failed).

As the songs proliferated online, they ended up in the record bag of French DJ/producer Joakim. As Luaka Bop’s Welles-Nyström explains, this was their first introduction to his music. “A few summers ago, Yale [Evelev, Luaka Bop president] and I decided to drive down to North Carolina to visit Moog and ask if they wanted to help out with our William Onyeabor project. While driving, we were listening to a fantastic mix by Joakim. ‘Gentle Persuasion’ was the last track on this mix and when we heard it, it just blew us away. We couldn’t tell when or where it was from, yet it sounded like something we’d heard before in a great way.” After finding more of his music, they called up Blunt, who signed the contract the next day. “He was just so delighted to hear from us,” Welles-Nyström continues. “He signed a contract the next day. We were so blown away by how fast it all went. William Onyeabor took four years, and this guy didn’t even take 24 hours!”

Blunt lost touch with most of the artists who played on Gentle Persuasion, though he still sees Flaviani on occasion. “He plays a lot,” he says. “He’s got a lot of new things in the studio. It’s still his garage, still the same house.” The team at Luaka Bop sent Blunt some of the records that have been inspired by his music, which he likes. “It’s really good! Especially the stuff Dean does,” he says. Nowadays, Blunt spends his days around the house, listening to Miles Davis and playing the trumpet, which he started to learn after his stroke prevented him from playing the guitar: “It’s hard to manage my right side somewhat, [but] there’s been some improvement.” He’s written two songs this year, one of which – called ‘Dreaming’ – features his youngest daughter.

Still, I never totally get a sense of how such a strange and unique record came to be, or whether Blunt ever realised he’d struck upon such an intoxicating style and formula. When I try to press him, he offers very little. “Curtis Mayfield,” he says. “He had a lot to do with it. I remember, it might’ve been the 60s or 70s that I was listening to his stuff. He had a lot to do with my style.” Really, Blunt never thought about the record in the intervening years, even as it was developing a cult reputation, unbeknownst to him. “I think about my car a little bit more,” he says. “That was a 1954 Cadillac. I think about that a lot. That’s what’s mostly on my mind.”

Anz shares zesty visual for ‘Unravel In The Designated Zone’