Back in 2012, Australian artist Guy Ben-Ary was awarded the creative Australia Fellowship to develop a biological self-portrait. He was inspired by his childhood dream of being a rockstar, as well as questions about “shifting perceptions surrounding understandings of ‘life’ and the materiality of the human body.”

To create his biological self-portrait, Ben-Ary took a biopsy from his arm and used cutting-edge technology to transform the skin cells into stem cells, which he then turned into neural stem cells. This allowed him to build what he refers to as “the world’s first neural synthesizer.”

The machine works as follows: music is “fed into the neurons as electrical stimulations and the neurons respond by controlling the synthesiser, creating an improvised post-human sound piece.”

Musicians have been invited to perform on the contraption, which is known as cellF. There is no programming involved, meaning cellF runs using only biological matter and analog circuits. View some diagrams below and read more at Guy Ben-Ary’s website. [via The Creators Project] 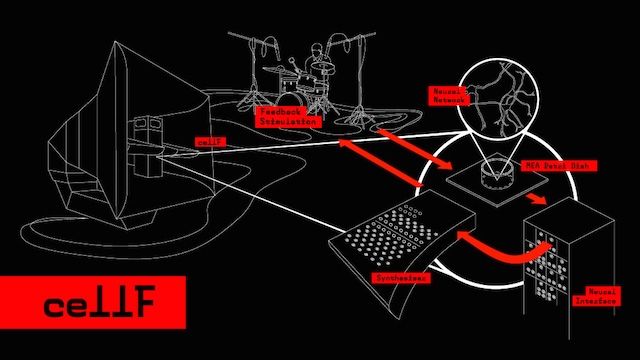