There’s a paradox at the heart of how we consume and perceive music in the internet era.

We can instantly stream or download almost anything. It’s so much easier to tap into any era, artist or genre. Everyone’s become an expert, and the lines between musical styles are smudged. At the same time, the appetite for the new has accelerated. Fans are constantly on the lookout for the hottest micro-scene or undiscovered genre. Local patches of creativity are thriving in spite of our hyper-connected times.

In Africa, electronic music is bubbling. Across the vast continent, fresh machine-generated sounds are popping off, sometimes drawing on outside influences, sometimes made within their own creative bubble. In Egypt, electro chaabi, the computerized update of urban folk music, recently caught the ear of Kode9 and other forward-thinking UK DJs. Afrobeats, with its hip-hop leaning, accessible 4/4 vibe, has travelled beyond its origins in Nigeria and Ghana to grow in the UK and beyond, whilst in South Africa, house and its many regional variants like kwaito have been popular for a long time. Its most visible house artist, Black Coffee, is a superstar at home and popular worldwide.

Of all these exciting, recently unfolding forms, gqom could be the most outlandish. Emerging mostly from the townships of Durban, South Africa’s second most populous city, gqom is a raw dance music blueprint with a polyrhythmic bustle – part broken beat, part chrome-plated synth menace. Skeletal, robotic, unsettling and irresistible, it sounds somewhat influenced by UK sounds like grime and funky, but has nothing to do with them, says gqom producer Citizen Boy, part of the Mafia Boyz collective.

“It is very easy to identify a gqom sound because it is unique.”Emo Kid

“Honestly speaking, most Durban producers don’t know grime. I didn’t know grime until‎ two months ago I think. I was kinda surprised when I first heard grime – I was like, this music is almost the same as gqom, but grime has quality sounds. That’s the thing I like.”

Gqom might be relatively new, but it’s picked up attention fast. Leftfield grime label Goon Club Allstars released an EP by gqom crew Rudeboyz in June last year, which was for many the first taste of the genre. This year, bumper compilation Gqom Oh! The Sound of Durban Vol. 1 is poised to disseminate the sound further and get DJs rubbing their mitts with glee. Put together by Italian DJ, producer and Gqom Oh! label boss Nan Kolè and South African contact Lerato Phiri, it’s a 19-track primer featuring some of the scene’s hottest producers.

Gqom Oh! is the kind of bolt from the blue that doesn’t come along every day. Check Dominowe’s ‘Africa’s Cry’, a stripped cyborg rattle of deep bass kicks, pots-and-pans percussion and a creeping synth, forming menacingly across chemically-altered skies. Or the martial drums and bleeping top-line of the bumping ‘Sgubhu 6 (Gqom Edit)’ by Forgotten Souls. Gqom is DIY, a low-budget street sound at odds with the smooth, clean production of the populist kwaito house. The bass is derived from the subby kick drums and the tracks are sparse, built from few components; there’s little in the way of melody to be found.

“I think the style was invented when some unknown guy from elokishini, the ghetto, got hold of production software and began experimenting and making something he could dance to, and gqom was born,” says (brilliantly named) producer Emo Kid, but some reckon that it mutated from other previously existing styles. Gqom shares some similarities with the local house sound, despite its non-4/4 pattern, and it’s often blended at house parties by DJs playing a mix of gqom, sgubhu and hip-hop.

“I think I heard about gqom music in 2012,” says Citizen Boy, who believes the style comes from “an old genre called Sgxumseni, which means ‘make us jump’.” He adds: “DJ Clock and DJ Gukwa used to produce it, then after a while Naked Boyz arose and they took the spot like it’s the genre gqom. It’s almost the same as gqom, but the difference is that Sgxumseni is a four-step and gqom is a broken beat — it can be a three-step or two-step beat.”

“Gqom music relates a lot to house music but it is also slightly different from house music, it is very tribal and the kick drum has an unfamiliar pattern,” adds Emo Kid. “It is very easy to identify a gqom sound because it is unique.” 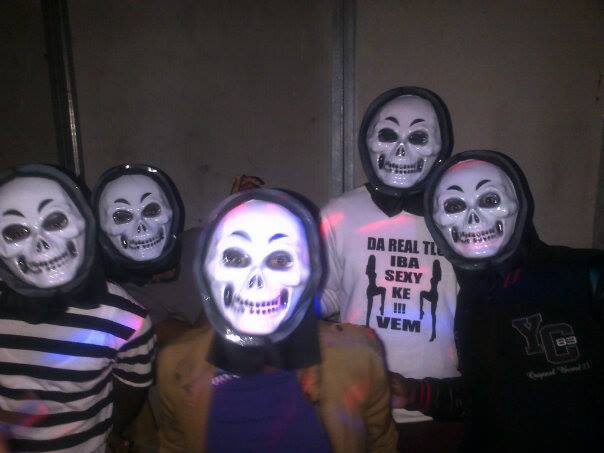 Currently, there are plenty of producers making gqom, with acts including Julz Da Deejay, TLC Fam, Cruel Boyz and DJ Mabheko appearing on the compilation, and tons more to be found on the internet. Very much a product of the technological era, the music is shared and played purely via MP3s from websites and Facebook groups, and there’s a dizzying amount of it – so much that it’s hard to navigate to the good stuff, which is where Nan Kolè’s Gqom Oh! imprint comes in.

Kolè discovered gqom after he fell down an internet rabbit hole and instantly connected to the sound. “I have some friends that were already collaborating with South African artists,” he says. “One night around January 2015, I saw that a friend of mine was tagged in a link with the hashtag #Gqom. I clicked it and sat till 5am downloading hundreds of gqom songs. I was immediately addicted to that crazy and unique sound.”

For Kolè, it was the genre’s unique balance of percolating beats and dark synths permeating them; a sense of the uncanny on the dancefloor. “I always feel a weird, powerful ‘high’ energy when I play it. It’s a perfect mixture of deep and dark atmospheres with African rhythms. Gqom is on a boundary between conceptual music and ‘body’ music (not mental music). It’s tribal and urban at the same time. This genre expresses feelings of anger and is connected to the troubled history of South Africa and township life. It’s incredible how much you can dance to it with those feelings and emotions and without a 4/4 kick.”

That juxtaposition of tension and release is certainly ingrained in gqom. But like the best hardcore or house music, a vacillation between darkness and euphoria is the perfect storm for activating a drug rush too. In Durban, the drug of choice is ecstasy, which fuels “bhenga” dancing at local gqom parties and occasional events at larger clubs like the city’s Club 101. It’s clear that Rudeboyz’s breakthrough track ‘Mitsubishi Song’ wasn’t a paean to jeeps.

Citizen Boy is quick to acknowledge the impact that drugs have had in the gqom scene. “There’s this drug called qoh, or ecstasy, it makes them crazy. If there’s a party somewhere there’s always going to be someone who has ecstasy. Drugs play a huge role in the gqom scene, it makes people feel confident and they start to dance to the music — even if they can’t dance, they will dance to it.”

Emo Kid is more reluctant to connect drugs with the scene. “I think gqom music has nothing to do with drugs – gqom is a young music genre and it can also be used good or bad, just like any genre out there.”

“Gqom music is a collection of loud tribal sounds creating a pattern unlike any other.”Emo Kid

It’s notable that many of the artists have chosen a name denoting their youth. Gqom is very much geared towards a new generation favouring internet sharing and noisy, rebellious sounds, and it shares the DIY spirit of punk or dubstep. It isn’t completely clear who christened the genre, but gqom – a Zulu language colloquialism meaning ‘drum’ – translates as something like ‘noise’ or ‘bang’ in current parlance, says Citizen Boy.

“I think gqom‎ means noise, because when I produce, I sit in my room then apply the speakers to the maximum volume so I can be in that state, that producing state, and my mom will usually open the door and shout ‘kukhala ub’gqom gqom nje lah,’ which translates to ‘there’s a lot of knocking here’. So I think people took it from there.”

“Gqom is a big bang which leaves you happy after it hits you,” adds Emo Kid. “Gqom music is a collection of loud tribal sounds creating a pattern unlike any other.”

The help of Lerato Phiri was invaluable when it came to Nan Kolè making connections with gqom artists in order to put the compilation together. Though he hasn’t visited Durban yet — but will do soon thanks to an cultural exchange project — he’s determined that his label can help put the city on the map as a vital music hub.

“I decided to run this label to make Durban’s gqom world-known. My aim is to spread the music of Durban to the world but at the same time keep it local. Durban needs to be known as, for example, Chicago is for juke and house. I want to bring Durban artists to Europe and help them improve in technologies and worldwide connections.”

Though gqom is still a niche concern in Durban in terms of club play, and most of it is played in digital form by DJs at house parties and functions, the perpetual search for something fresh has made it catnip for audiences abroad, especially in the UK where more adventurous DJs are beginning to incorporate it into their bass, house and grime sets. 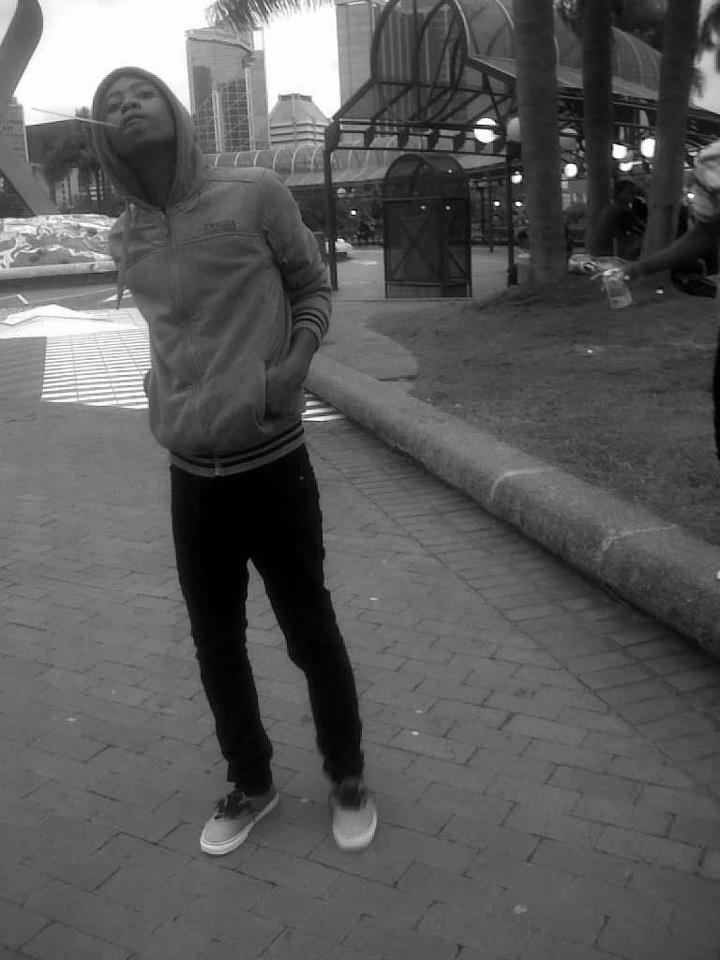 “Personally I think right now there is a great desire for something new and fresh in European club culture, and the feeling of gqom is extraordinary,” says Kolè. “It’s really new vibrations that come from the opposite side of the world, from young guys that never listened to European electronic music. Gqom is pure in some way and on the cutting-edge of club music. The next step will be to see the dancefloor reaction to a strictly two or three-hour late-night gqom DJ set.”

It seems entirely possible that gqom could achieve crossover status. Though it lacks the accessibility of kwaito or extremity of Shangaan electro, it’s precisely its rawness that sets it apart and will catch ears in the UK and worldwide. “That would definitely be a dream come true for me. The UK is one of the biggest music supporting places in the world,” says Emo Kid. “Being popular in the UK and other places abroad would be amazing. It will mean more shows, meaning more money made. Most definitely it has the potential to cross over. People love something fresh and new, and it also dominates the dancefloor. People dance like crazy when gqom plays. It is very powerful.”

Citizen Boy, meanwhile, feels a sense of vindication that he can finally prove the doubters wrong. “I feel proud. The best thing about this is that I’m contributing towards gqom, and people around me used to tell me, ‘Leave this, it won’t get you anywhere, it won’t go anywhere, it will be stuck in Durban forever’, but I can get to rub it in their faces and say gqom is taking the world right now. It’s getting recognition now after all my hard work. I’m so happy that Durban has its own genre.”

Gqom Oh! The Sound of Durban Vol. 1 will be released on Gqom Oh! on January 29.