David Bowie’s death has triggered an outpouring of tributes from the artists he inspired.

Iggy Pop, who worked with Bowie throughout the 1970s, said: “David’s friendship was the light of my life. I never met such a brilliant person. He was the best there is.”

Kate Bush paid tribute to Bowie in a statement to the Guardian: “He created such staggeringly brilliant work, yes, but so much of it and it was so good. There are great people who make great work but who else has left a mark like his? No one like him”.

Gary Numan called Bowie “a true legend,” while Marc Almond of Soft Cell tweeted: “It’s not often I truly cry at the loss of an artist but I’m devastated. He meant so much. Goodbye David Bowie and our youth. We loved you.”

His longtime friend and collaborator Brian Eno said Bowie’s death “came as a complete surprise, as did nearly everything else about him. I feel a huge gap now. We knew each other for over 40 years, in a friendship that was always tinged by echoes of Pete and Dud [British comedians Peter Cook and Dudley Moore].”

Eno continued: “Over the last few years – with him living in New York and me in London – our connection was by email. We signed off with invented names: some of his were mr showbiz, milton keynes, rhoda borrocks and the duke of ear.

“I received an email from him seven days ago. It was as funny as always, and as surreal, looping through word games and allusions and all the usual stuff we did. It ended with this sentence: ‘Thank you for our good times, brian. they will never rot’. And it was signed ‘Dawn’. I realise now he was saying goodbye.”

Paul McCartney posted a tribute on Facebook alongside a photo of himself and Bowie saying, “His star will shine in the sky forever”. 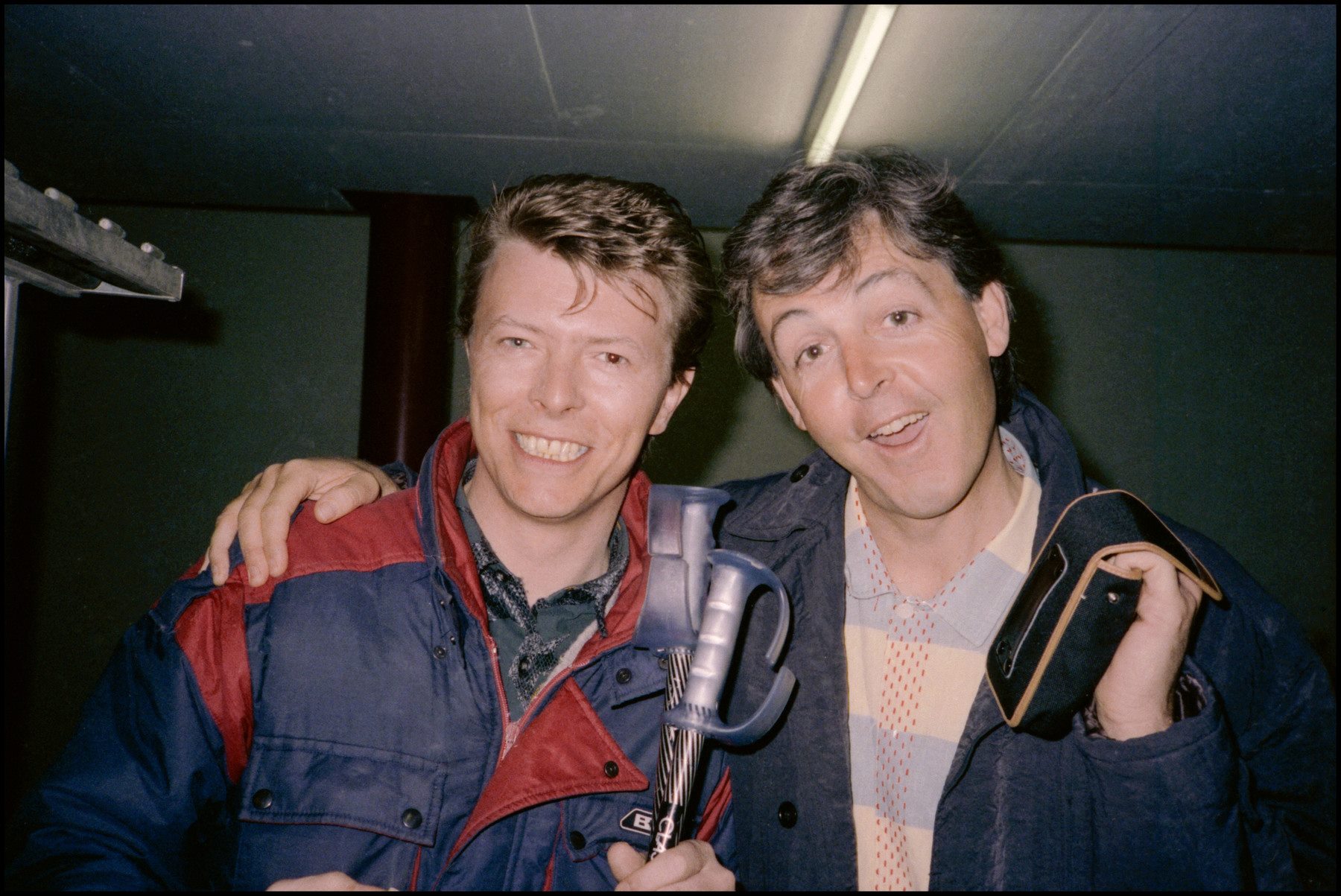 Kendrick Lamar tweeted some thoughts about Bowie. The rapper said he hoped to meet after hearing Bowie speak about To Pimp A Butterfly‘s influence on Blackstar adding, “What an honor, what a soul”.

Hoping 2 meet u after we heard the news. At Brock's house watchin your Doc's & interviews. But no lens could ever capture your point of view

What a honor, what a soul. David Bowie, Spirit of Gold. RIP.

Marilyn Manson speaks about Bowie’s influence on him in a new essay for Rolling Stone. Describing hearing Diamond Dogs in 1997 the singer said, “All of my nostalgia, instantly turned to awe. I was hearing him sing about fiction as a mask to show his naked soul. This changed my life forever.”

Justin Timberlake shared a vintage photo of Bowie, writing: “I can never express into words how you will continue to inspire me… Thank you for showing a pimple-faced, curly-mopped kid that DIFFERENT was THE THING TO BE.”

Carl Craig wrote: “RIP David Bowie. He has been in my life since I was a young boy. He inspired Kraftwerk so he also inspired Techno music”. 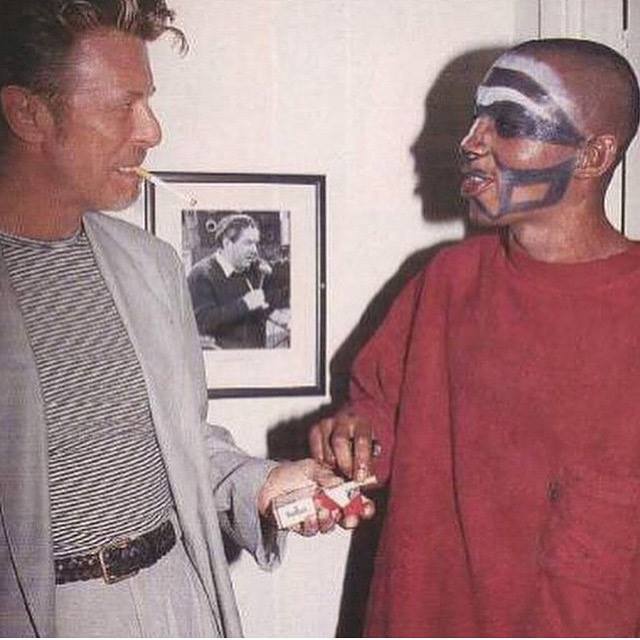 Kanye West described him as “one of my most important inspirations, so fearless, so creative, he gave us magic for a lifetime.” Pharrell hailed him as “a true innovator, a true creative”.

Director Guillermo Del Toro wrote: “Bowie existed so all of us misfits learned that an oddity was a precious thing. he changed the world forever.”

Nile Rodgers — who co-produced Let’s Dance and Black Tie White Noise — wrote a tribute for Yahoo saying, “when no one would work with me because of “Disco Sucks,” this guy, who was considered one of the great, innovative rockers, picked a disco guy, who nobody wanted to work with, to collaborate with, and we wound up making the biggest record of his career, Let’s Dance.” 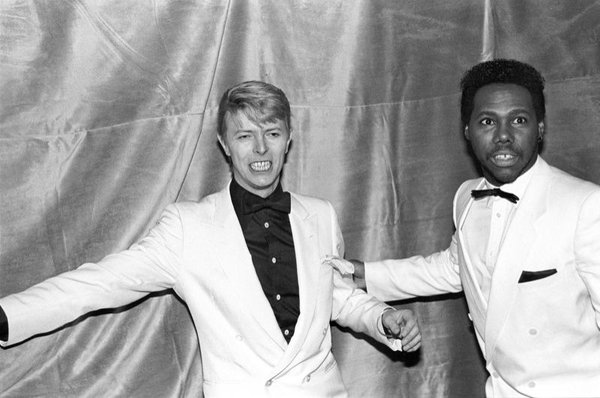 Grooverider trips over some dude sitting on the floor at Blue note..Rider looks down its David Bowie..Legend

Goldie paid tribute on Facebook with a photo of himself and the late pop icon, calling Bowie “an inspiration and a fearless creator.” 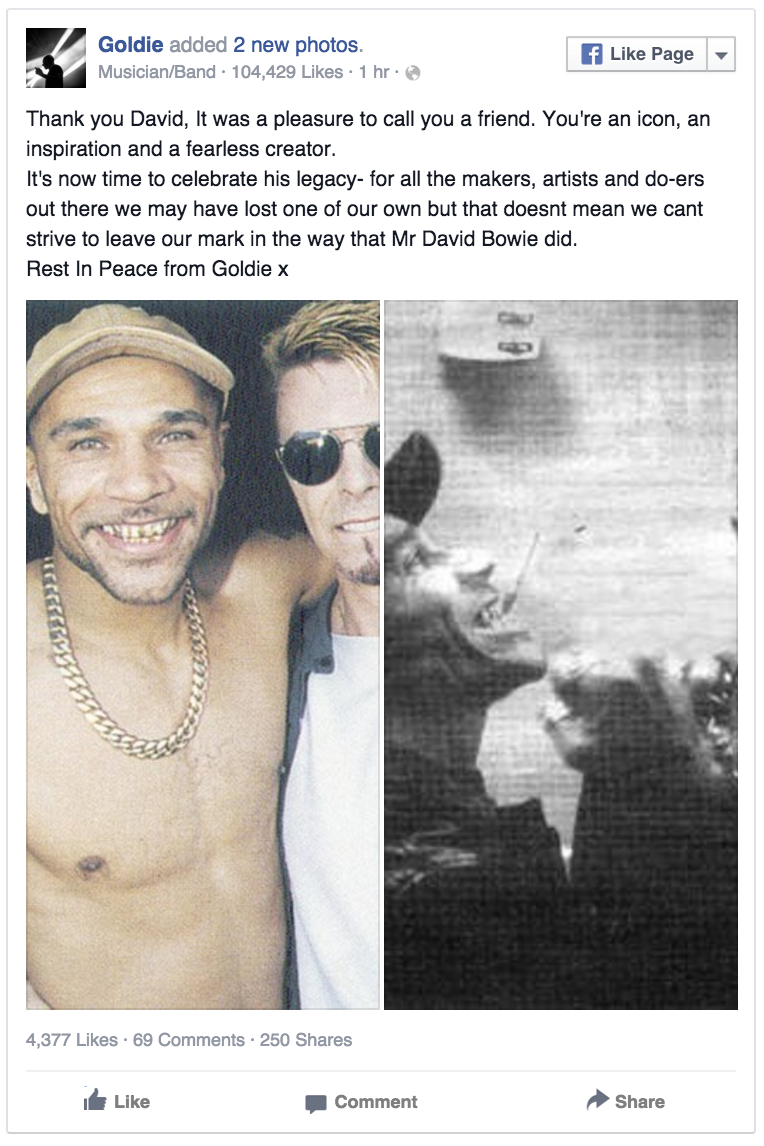 Owen Pallett shared a great story of meeting his “favourite musician age 9 to present day”, when the two of them “hit it off insanely and talked about Mishima and This Heat and all sorts of stuff.” 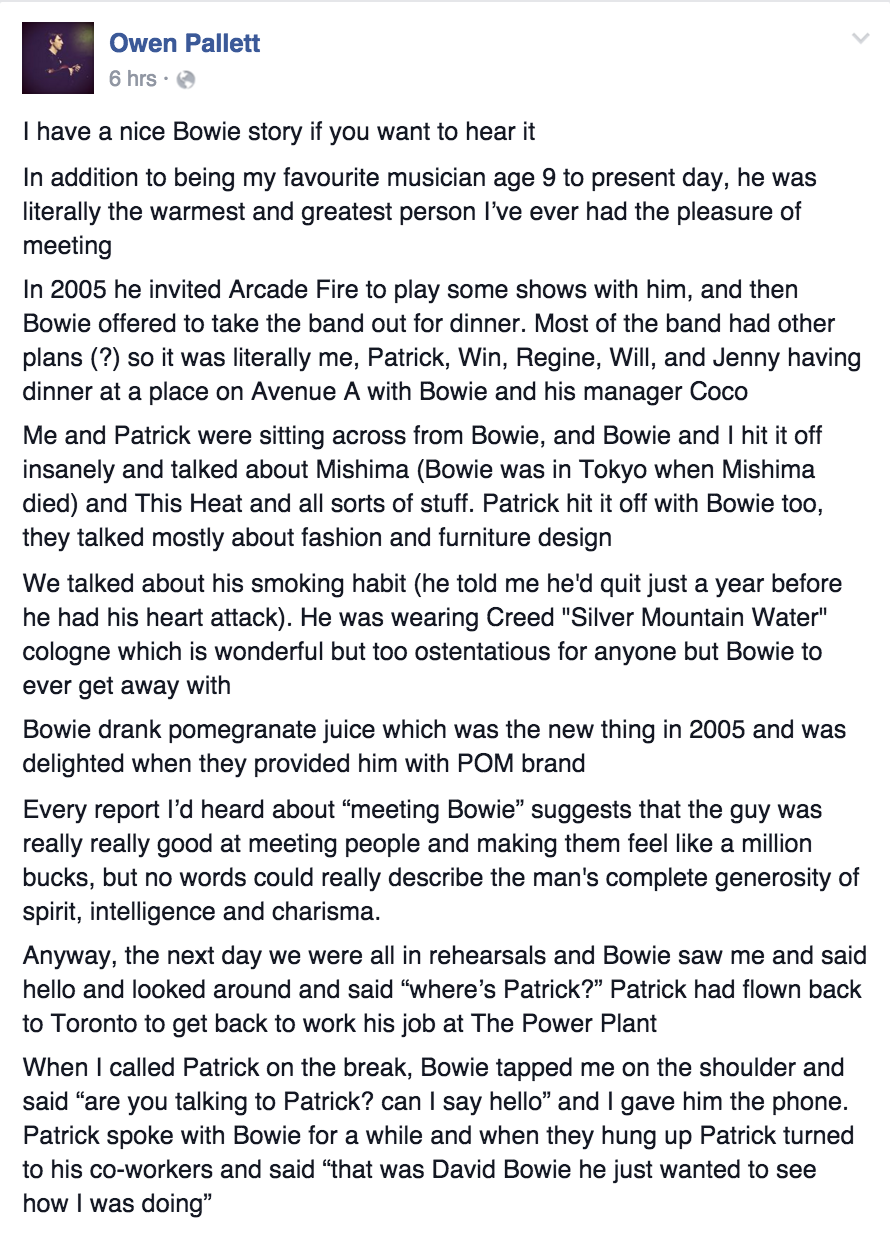 Max Tundra dusted off his “daft old Bowie anecdote” about the legend turning up to a Pan Sonic show in 1999.

Time to dust down my daft old Bowie anecdote. pic.twitter.com/tbfOntZr9Y

Glastonbury boss Emily Eavis tweeted a photo of Bowie on his way to play Glastonbury in 1971.

This is a great moment, David Bowie on his way from the farmhouse to the Pyramid for his set at daybreak in 1971 pic.twitter.com/PCCK3tbw0B

Fans have started laying flowers by the Aladdin Sane graffiti in Brixton, south London, where Bowie was born.

Tributes to David Bowie in Brixton, where he was born pic.twitter.com/6vXGSNlrQ3

The Ritzy will also be hosting a Bowie street party in Brixton tonight. Attendees are asked to “bring instruments, speakers, food and most importantly love.”

The pop icon died yesterday after an 18-month battle with cancer. This post will be updated throughout the day.