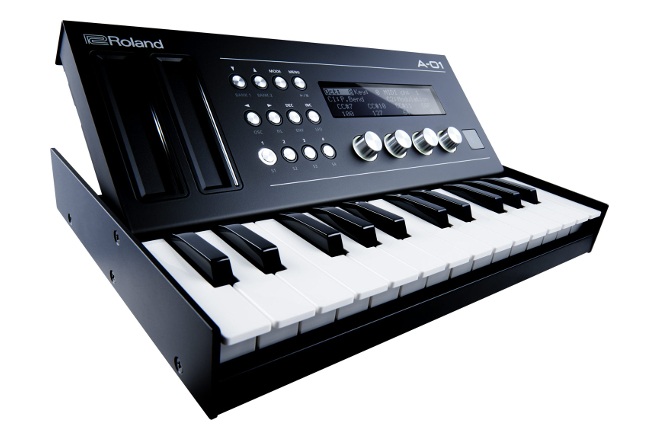 The controller connects with CV, MIDI and Bluetooth.

Roland has unveiled its latest key piece of gear aimed at electronic producers ahead of this week’s NAMM show.

The compact A-01 controller is modelled on the company’s recent Boutique series of synths, taking the form of a module that fits into the company’s optional K-25 keyboard. Where the Boutique line was based on classic Roland synths like the Juno-106 however, the A-01 is a totally new creation, functioning primarily as a controller for MIDI and CV gear, as well as mobile apps.

The A-01 also has a basic synth built-in, which Roland says is an an 8-bit CPU sound engine “developed by the engineer responsible for Roland classics including the JX-3P”. You’ll need to buy the £75 keyboard component separately (or as part of a bundle), but the A-01 also has a built-in sequencer.

The A-01 might not look like much, but it’s more versatile than most controllers currently on the market. As the slew of equipment announced ahead of NAMM 2016 proves, modular synths are here to stay, and the A-01’s CV/gate outputs make it an attractive option for those needing easy control over their swelling collection of Eurorack gear.

While control over legacy gear is an important part of the A-01’s design, it can also transmit MIDI wirelessly over Bluetooth – much like Korg’s recently announced nanoKONTROL and nanoKEY Studio. Though Korg’s new units have more physical controls than the A-01, Roland’s could be a better choice for those with a large collection of physical gear alongside an iPad full of apps.