Watch As The Earth Burns: Charles Hayward and Charles Bullen reflect on This Heat

The post-punk era remains one of the UK’s most fruitful creative periods, with dozens of bands embracing the late 70s DIY spirit of groundbreaking groups and labels and applying it to their takes on ska, world beat, pure pop, and beyond.

Arguably, the best artists that came out of this wellspring of talent were those that pushed into the farthest reaches of accessibility. Acts such as The Raincoats, 23 Skidoo, or The Pop Group, who dabbled in writing catchy tunes or danceable rhythms, but steadied their focus on experimental sounds and a rough melding of genres. Of that cadre of likeminded artists, the group that burned the brightest and managed to leave the most lasting impact, in spite of surviving for only the better part of five years, was This Heat.

Through two full-length albums (1979’s self-titled debut, and Deceit, the follow-up from 1981) and the Health & Efficiency 12” EP — all three of which have just been reissued on vinyl by Light In The Attic Records — the London-based trio of Charles Hayward (drums/vocals), Charles Bullen (guitar/vocals/tapes), and Gareth Williams (organ/bass/tapes) took what they considered a cubist approach to music. The same influences that were informing the work of their contemporaries and friends were evident, but in brilliantly deconstructed form.

“What I’m seeing now is an awful lot of people just following things. We tried to find our own thing and ask, ‘What else is there?’”Charles Hayward

Dub production techniques became the proto-illbient psychedelic dissolve of ‘24 Track Loop’ (found on This Heat). The astonishing and beautiful tape experiment ‘Graphic/Varispeed’ (the B-side of the ‘Health’ single) and ‘Radio Prague’, a track from Deceit that features Williams quickly raising and lowering the volume of a shortwave receiver over a steady pulse, draws on the work of modern classical composers Pierre Henry and John Cage. And amid their entire creative output, which also includes a pair of wonderful Peel Sessions, touches of Bullen and Hayward’s respective past as prog and jazz players sneak through their soupy mix of scratchy soundscapes and twitchy rock.

“It was all about trying to find something new,” Hayward says, speaking from his home in London. “That’s what it said on the instruction manual when we got into The Who or Sgt. Pepper or Albert Ayler. ‘Be yourself. Find your own thing. Work at it.’ What I’m seeing now is an awful lot of people just following things. We tried to find our own thing and ask, ‘What else is there?’ Looking back, I can see that that’s what made it different.”

That was definitely the mode of operation once Hayward and Bullen found each other in 1973 via an ad in Melody Maker. By that point, the drummer had logged time in mercurial prog outfit Gong and Quiet Sun, which featured a pre-Roxy Music Phil Manzanera on guitar. Both men recognized a kindred spirit in the other and quickly began holding jam sessions in Hayward’s childhood home. This turned into freeform performances under the name Dolphin Logic, and soon the pair joined up with Radar Favourites, a skronky outfit that was, at the time, managed by Williams. The three would spend their off hours together geeking out over records and batting around political discussions. When the Favourites ended, Williams seemed the perfect person with whom to join forces on a new project, even though he had no musical experience at all.

“Despite being a gentle, funny character, he was shy in a lot of ways,” Bullen says of Williams, who passed away in 2010. “The first few gigs, he kept his head down and just played the keyboard. It was only after a year or so that he got this persona on stage. So much so that I think people might have thought he was quite wild.”

Live performances were of course important, but even more essential to This Heat was the time they spent improvising and experimenting in the former meat locker that was their rehearsal space (dubbed Cold Storage by the band). By Bullen’s reckoning, they would spend over 50 hours per week there, churning out the ideas that would fill out their three studio recordings and capturing every last moment of it on tape.

“There’s hours and hours of us playing and playing,” he remembers. “I would be the one to press record and then listen back and find this bit to take back to the guys and say, ‘Listen to this.’ Then we’d have to suss out what we’d been doing.” 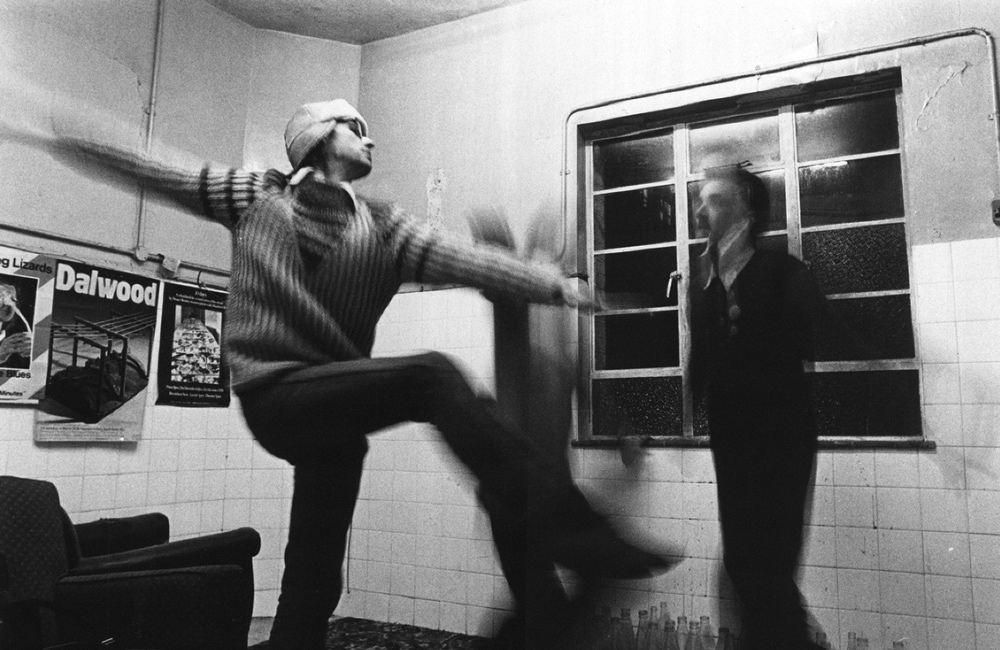 These archives were also used to flesh out live sets and some of their studio recordings. On This Heat’s ‘Horizontal Hold’, they kick off the song by splicing in an early version captured at the home of Haywards’ parents, and on ‘Fall of Saigon’, from the same album, the three are playing along to a tape of a percussion jam session slowed down to half-speed.

This deeply experimental yet completely accessible sound earned This Heat a great deal of respect among the journalists of the UK, who were writing about the band before they had an album out based solely on their gigs and some airplay of their demo by John Peel. The trio also had the love of many of the other far-reaching acts of the time, like The Slits and The Pop Group.

“I remember looking out from the stage one night and seeing [Slits guitarist] Viv Albertine spacing out and dancing to some free improv stuff we were doing,” Bullen says. “She came afterwards and said, ‘That was really sexy.’ Our audience before that was a small number of spotty young men, not sexy females. The Pop Group went mad when they first heard us. Mark Stewart came backstage at the ICA and said, ‘We’ve just signed to Virgin and we’re gonna get a million pounds, and we’re gonna give you half of it!’”

The evolution of the band during their short lifespan found them aiming for a sound that was at least a little more relatable. ‘Health & Efficiency’ was their most “rock” statement, with the group chugging along for eight minutes on the strength of a jagged guitar line and Hayward’s stutter-step drumming. And although verse/chorus/verse never entered into their vernacular, much of Deceit is damn catchy, with some great vocal and melodic hooks, and a slightly lighter touch. Which is saying something for an album that centered on the fear of nuclear holocaust.

“We were resolved that maybe the ‘song’ thing needed to be focused on,” says Hayward. “We wanted to reconnect with what had been smashed up, almost as a way of moving forward.”

At the time of Deceit’s release, things started fraying within the band. The ever-curious Williams decided to take off for India to study dance for a year, asking his bandmates to go on hiatus until his return. But with a European tour already booked, they couldn’t agree to that, instead roping in keyboardist Ian Hill and bassist Trefor Goronwy to fill the role.

Great as those shows wound up being, Williams’ departure upset the balance within the band, something that was already feeling tenuous during the writing process for Deceit. Bullen’s sole lyrical contribution to the group was for the acidic and pointed ‘A New Kind of Water’, which takes to task a British populace keeping their heads in the sand while the world falls apart around them.

“I wrote the lyrics one way using ‘you’ and ‘they’,” Bullen says. “And Charles and I argued for months that it should be changed to ‘we.’ And I was persuaded in the end to change it. But I’m not singing about me, I’m singing to the people who get lulled into thinking, ‘Oh, don’t worry about air pollution. They’ll invent a new way to breathe.’” 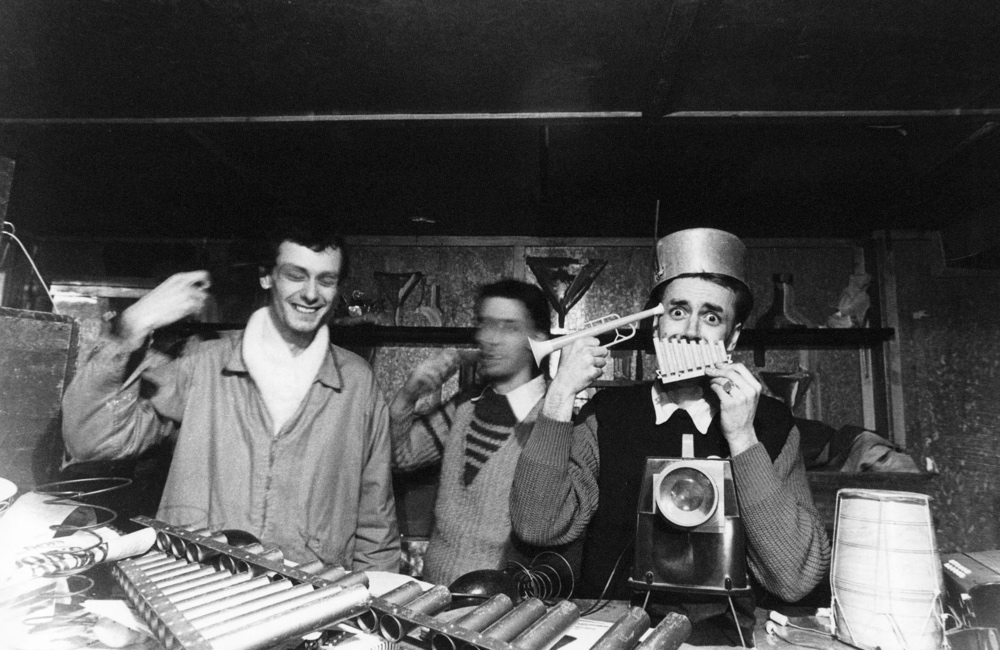 “Gareth’s vibe would have been to not give the people what they want, to not dig into the past.”Charles Bullen

By the time they returned home from their tour in 1982, Bullen and Hayward went their separate ways. Bullen did a bit of music, but mostly directed his energies on activism and education about the politics of food, health, and agriculture. The latter remained creatively active, recording dozens of albums on his own or in a variety of ensembles.

The influence of the work This Heat did during its brief lifespan seems to grow exponentially each year. Their albums have been reissued a number of times, including a career-spanning box set that was released in 2006, and these new vinyl editions. Contemporary artists like Alexis Taylor of Hot Chip (who asked Hayward to join his side project About Group) and Dan Snaith, the man behind Caribou, have sung the band’s praises in support of these current reissues. The band’s name has even come up in conversations about a recently deceased pop star.

“Owen Pallett said recently that he had gone to dinner with Bowie,” says Hayward, “and the topics of conversation were [Japanese novelist, Yukio] Mishima and This Heat. When I heard that, I was knocked fucking sideways.”

There has also been, in recent years, a call for This Heat to play live again. They’ll finally answer it in a new form this February at London’s Cafe Oto where Hayward, Bullen, and a few friends will perform as This Is Not This Heat, updating and reconfiguring some of their classic material in celebration of the 40th anniversary of the band’s first gig.

When asked about the experience of revisiting the work after all this time, and without Williams being part of it, Bullen smiles.

“I can’t think of the word. Strange, maybe? Interesting is another word, I suppose. The youngsters are loving it. They seem to be having fun playing these tunes from their youths or something. But if Gareth were there… Everybody wants to hear ‘Horizontal Hold’ or ‘Makeshift Swahili’ or whatever. Gareth’s vibe would have been to not give the people what they want, to not dig into the past.”

Instead, the two will look backwards, but on their own terms.

“We’ve got a given text, which is the three records and the Peel Sessions, and we’re working on that in a modern Shakespeare kind of way,” Hayward says. “You know how they compress the thing and get rid of some of the lines or switch the gender roles? We’re working on it like a remix rather than trying to generate new stuff, or figure out, ‘What did you used to play there, you old so-and-so.’ We know how the chords go and what the lyrics are. Now we can change it and look at it all from different angles.”