Though bonded by shared ideals about music, each member adds a different perspective and skillset to the group. The four producers met at university in Lille, France, and first emerged on the scene with their self-titled debut EP in 2009. Since then, Club cheval has evolved from a musical collective into a fully formed band. Each producer has built a solo career, and an alliance with fellow French producer Brodinski has brought opportunities to work with the likes of Kanye West.

Last year was a busy one for all four members. Besides releasing two singles (‘Discipline’ and ‘From the Basement to the Roof’) from their debut full-length LP Discipline, released on March 4, each member continued to put out solo EPs: Canblaster released Continue, Sam dropped Not Dead Yet, Panteros666 collaborated with Woodkid on Clear, and Myd put out Número Uno. They’ve also developed an impressive new live show, which has grown beyond DJing into a true performance with each member on piano, synthesizers, drum machines, MPCs, and vocals.

Sam Tiba and Myd met FACT in New York to talk about escaping from Lille, the joy of complications, and their mission to make Discovery-sized anthems on Discipline.

Do you remember what brought you guys together? Were you into the same type of music?

Sam: It’s really weird because we didn’t listen to the same type of music at all. I remember when I met Myd I was chilling at my friend’s place listening to French rap, and he came over but didn’t say shit. We didn’t even talk about music during the two or three first times we met. At some point we all realized that we all had ideas about music, things we wanted to change, and things we wanted to make evolve. We are all from a town called Lille, and at some point if you’re in France and not in Paris, it’s a shithole. I was born and raised in Lille, and we all left when we were 23.

Myd: What leads Club cheval is emotion. It’s not about styles of music. It’s about the way you feel it, and we all feel the music the same way. For example, if you put 10 chords in front of us, we will all choose the same ones.

You both worked with Brodinski on Kanye West’s album, and have produced several other hip-hop projects. Have you always listened to rap?

Sam: My big brother, who I shared a room with, was into French rap, and as long as I can remember I’ve been listening to hip-hop.

Myd: For me it’s pretty different because before I met Brodinski I never listened to rap in a deep way. I wasn’t digging into rap, but I used to listen to mainstream rap on the radio and I loved it. To be honest, when we started Brodinski’s album Brava, I had never produced a rap track.

Myd, you’re from a kind of electro-punk background, right? What different influences do you guys each bring to the group?

Sam: The three of them brought me a more open mind. I used to be set about certain things. I used to really hate the sound of a guitar, but these guys they taught me how to understand that influence, and how to understand a rock pattern. Now when we talk about Club cheval’s second album, it’s me telling them we should do something more rock.

Myd: Sam brings something spontaneous to the group. He started with DJing and sampling, and he brings that fresh stuff that changes the way we think in the studio. Panteros has been a drummer for a long time and is pretty organized in his mind. Canblaster is a pianist, and I studied sound engineering.

Sam: I remember sitting at Canblaster’s flat, which was our first HQ, and I would watch Canblaster and Myd produce, just look at them and write things down. There was no ego in any of it. The first time we met, they had already been producing, and they asked me to make my first track with my ideas. My first track ‘Barbie Weed’ was conceptualized by me, but made by them. Progressively I didn’t need any more help, but we all still help each other. Any Club cheval track, basically, has another person behind it. Maybe even for just one measure, but there’s someone else behind it. 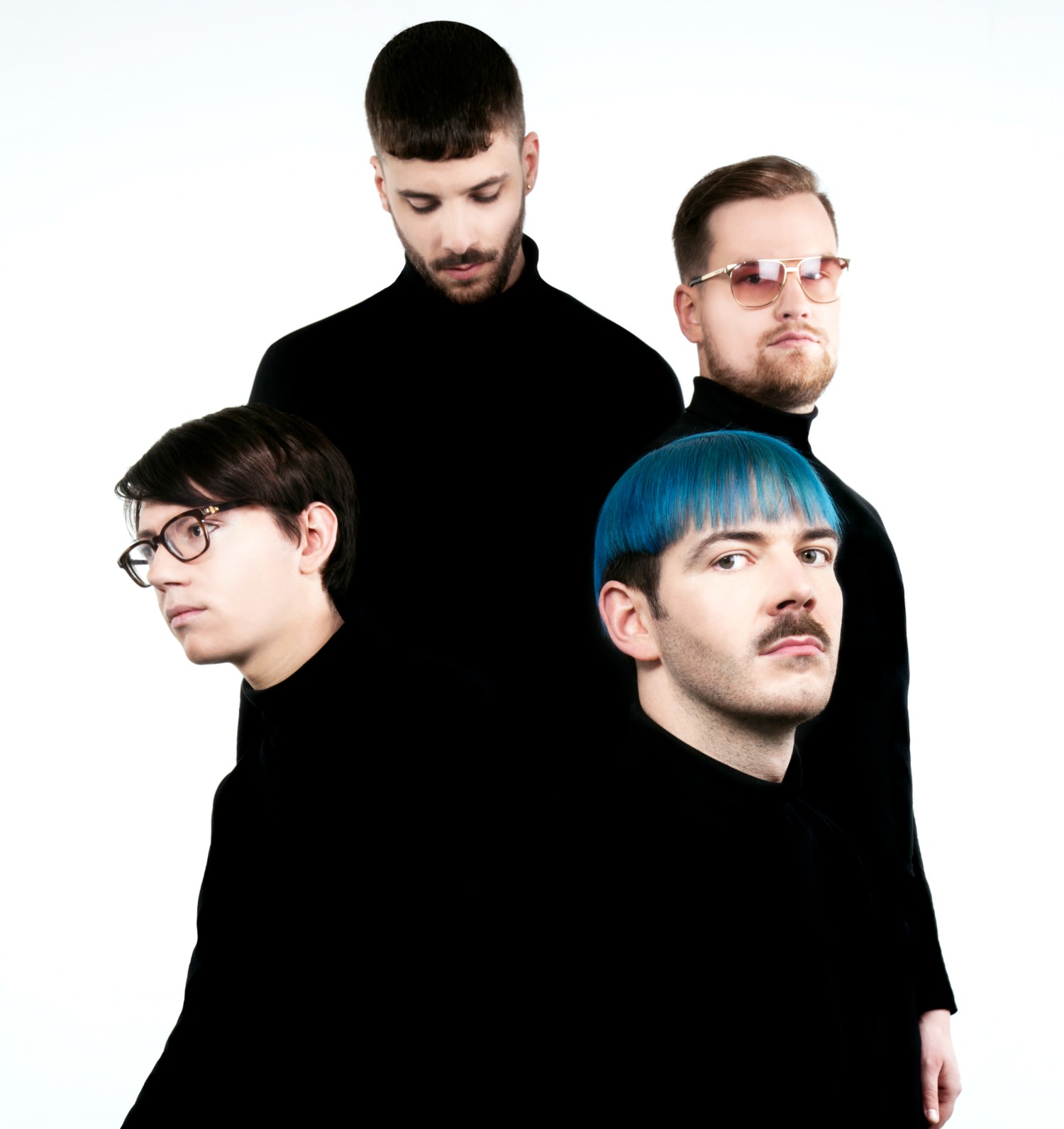 “You’re creating something for the crowd. You cannot be selfish during a DJ set”

Sam, your summer mixtape from two years ago is one of my favorites. How do you approach making mixtapes as opposed to DJing on the radio or in the club?

Sam: My mixtapes are super complicated. I take a lot of time to do that shit. At some point I tried to do that in the club but it was a fail. It goes all the way over people’s heads. You cannot really please nerds in the club. I love the mashup and bootleg thing, but in my mixtapes it’s super fast – it’s 30 seconds of a track, then something else, then something else, then five tracks at one time. It’s technically doable in the club, but you kind of break the vibe.

[Club cheval] taught me a lot about taking my time, and to not try and play three tracks at the same time. As for the radio, to be honest I keep on doing complicated mixtapes for the radio because I want to educate people and show them what you can do with a mixtape. Sometimes when I listen to my favorite artists’ mixtapes, I’m like, “wow, you’re really fucking lazy.” [Laughs]

Myd: I think with a mixtape it is kind of you, but when you’re in the club you’re with a crowd, you know? You’re creating something for the crowd. You cannot be selfish during a DJ set.

Sam: That’s what I learned. At some point when you start DJing, you’re like, “Fuck them.” If they don’t want to learn, too bad for them. But you cannot be too violent with people with your ideas. You have to be smooth. My first DJ set I thought I killed it, but it was shit because nobody danced. The purpose of my DJ sets is to make girls dance.

How did you each get into DJing?

Sam: I had a dark era when I was 18, 19 years old. I was really bored. I was a big power user of a French rap forum and at some point I thought that instead of talking about music I should try it. I bought some shitty turntables with the first paycheck from my student job, and during that first year I mixed dubstep and soul in my room.

Myd: I was a mad fan of English electronic music like Chemical Brothers. In 2001 or 2002 I bought a DVD of Fatboy Slim mixing at Brighton beach in front of 200,000 people, and in 2002 I bought my first set of turntables. I would buy some vinyl at a store in our hometown of Lille, listen to them, and mix.

Sam: We are all actually from the same era, in the same city, doing the same shit, but we never came across each other until in 2007 or 2008. I love that we have kind of the same story, but it wasn’t the same type of music at all. I don’t think we would have understood each other back then.

Myd: When I met Canblaster, he had the craziest collection of vinyl – Daft Punk, Justice, Cassius, MSTRKRFT, Basement Jaxx, Chemical Brothers, and English electronic music stuff too. We started to mix that, and the first DJ set we did together was in Berlin after a set by my band Sexual Earthquake in Kobe. We came and asked to DJ after, and little by little I fell in love with DJing because it was exciting and simpler than playing live.

What does each of you contribute to the live show, and what’s the setup?

Sam: Myd has two synthesizers, a Virus and Korg MS-20. Victor [Panteros666] has a drum machine and an MPC, Canblaster has two synths, and I have an MPC and I sing with a harmonizer. You know Bon Iver? The effect he has on his voice is what I have on stage.

What collaborators do you guys have in store for the album? I know you have Phlo Finister on ‘From The Basement To The Roof’, and Rudy on ‘Discipline’.

Sam: It’s only Rudy on most of the tracks. Rudy is amazing. You know all the big R&B singers in the United States who have ghostwriters and reference singers? Rudy is a reference track dude for people like The Weeknd and Chris Brown. He came to the studio two years ago to listen to the album, and he understood everything. What is cool is that he doesn’t have an ego or a career that would give him an ego. He doesn’t mind being in the shadows. We can cut his voice, pitch up, pitch down, do whatever we want. For a guy like that, what’s important for him is that our project is what we want it to be.

I always compare it to Daft Punk’s Discovery—it’s the same voice on each track, and that’s from Romanthony, who was one of the biggest underground house artists. Those tracks became anthems without anyone knowing who the voice was, and that’s what the goal is for us.

You guys mentioned that your Club cheval projects in the past were like prototypes, and this album is the breakthrough moment. What clicked?

Sam: I think it was meeting [R&B and hip-hop producer] DJ Kore. I’ve been looking for an equivalent of that guy for years, but there’s no one like him. Every big rap thing in France, he is a part of that. We had all these demos and we did the album three times. At one point he made us realize we had reached something, and to make it understandable for people. I think that was a bit less than two years ago, but we had to learn how to mainstream our music without killing our own ideas. Find a way to make our music more universal without changing its essence. That was really late in the process, but we always stayed confident.

Now the album is kind of old for me. We started it four years ago, but what’s on the radio now is what we were doing back then. Like PC Music—we love PC Music and they’re vibing now, but we were doing that four years ago. I think the four of us are really lucky to be together. It’s like alchemy, and I think you’re going to be surprised by the album.