Rome Fortune on his debut album, dinner with Oprah and life after rap

On his debut album, Rome Fortune raps that he refuses to be pigeonholed.

It’s a straightforward message, but also something that has been evident in his ever-growing body of work. When he broke through in 2013 with Beautiful Pimp, Fortune unspooled his laidback lyricism over beats by Atlanta’s then-dominant Hoodrich Production Group (Dun Deal, Childish Major, DJ Spinz, C4) and established himself as part of the “New Atlanta” wave that was redefining the city’s rap scene. And while he’s at ease collaborating with the likes of Young Thug, iLoveMakonnen and OG Maco, he’s consistently looked outside of his city — and rap entirely — for collaborators, recording with Four Tet, Toro y Moi, Suicideyear and others.

He brought both threads together on 2014’s excellent Small VVorld, but each successive release was further and further away from even rap’s expansive mainstream. That was especially clear on the lead single from his new album Jerome Raheem Fortune, ‘Dance’ — a true-to-its-title track that balances Fortune’s triplets and cooing with Kaytranada’s four-on-the-floor production.

‘Dance’ serves as a preview of the album in style more than sound, in that hip-hop is only part of the picture throughout: there are jazz accents, an electronic sheen and haunting melodies from the various corners of the pop world. Apart from the single, Jerome Raheem Fortune is produced entirely by Cubby — like the CitoOnTheBeat-produced Beautiful Pimp 2, the album is cohesive while also experimental.

With Jerome Raheem Fortune due out on February 26 via Fool’s Gold, we caught up with Fortune about the album, his unique relationship with his fans and his plans for a life after rap.

On ‘Blicka Blicka’, you rap “I shouldn’t be pigeon-holed,” which is definitely in line with what you’ve said and done these past few years. How do you feel this album deals with that issue?

I think with this album, especially with having a label with me, and extra resources that I haven’t had prior to this, it’s going get to more people and introduce myself as a real musician, a real artist. It’s no “this is an Atlanta wave”. You listen to it, it’s just good ass music, you know what I mean?

How did you get from your blog post about finding a good label to signing to Fool’s Gold?

It was just super cool because I didn’t want to be tied down to anything for a long time, and they weren’t trying to, so doing the one album thing, just seeing how things go from there was super cool. It’s a team, a partnership — I don’t feel that I can’t call somebody up and say “we need to change this” or “we need to add this to the plan” or whatever. That’s important, because you don’t want whoever you’re working with from the label standpoint to be somebody you feel has a sense of authority over you, you want it to feel like you have equal input, and that’s what it’s been like. It’s helped me make this body of work that’s better than anything that I’ve made.

With this album, you worked almost exclusively with one producer and no other rappers. Why was that?

When I’m with one producer for the majority of a project, it’s easier for me to go in-depth and tell a story. It’s more difficult to tell a cohesive story if you have twelve different producers — it’s a clean slate every song. With this, I was able to say which way the album should go, it was way easier, input-wise.

It was a story that I needed to be telling. Cubby got it, he understood where I wanted to go, that I wanted people to take me seriously as a musician. He gave it a lot of attention and pre-production, post-production, a lot of changes. I felt like that’s the type of attention I needed from the producer. I don’t think I would have been able to get that from multiple producers in the timeframe that I made the album. We had that good ass chemistry, I ain’t wanna break it up. We have so much music, it’s crazy.

Bookending it with ‘All the Way’ and ‘Find My Way’, it seems like the album is about your journey, about putting yourself out there. Is there a story you’re trying to tell?

When I was on tour last year with IamSu!, a lot of the kids that were coming for me would ask “Why don’t you perform ‘Suitcase’?” or all these songs that I get personal on. They would say, “When I wanted to drop out of school last semester, I would drive every fucking morning to class and listen to this song.” That’s the shit that means more to me, I don’t care about some shit that is gonna pop off or sounds good right now or is the wave, and everybody’s gonna play it at their parties and shit. I’m trying to touch people when they feel like quitting their jobs or dropping out of school or don’t know what to do, when they need somebody to relate to.

I hear people say “You should do more Beautiful Pimp shit,” and I love that type of music, I do, but I don’t feel like the depth was there. With this new stuff, people can relate to it and get to know who I am. That’s the goal of the album: to get people to understand, this is Rome, this is who he is. 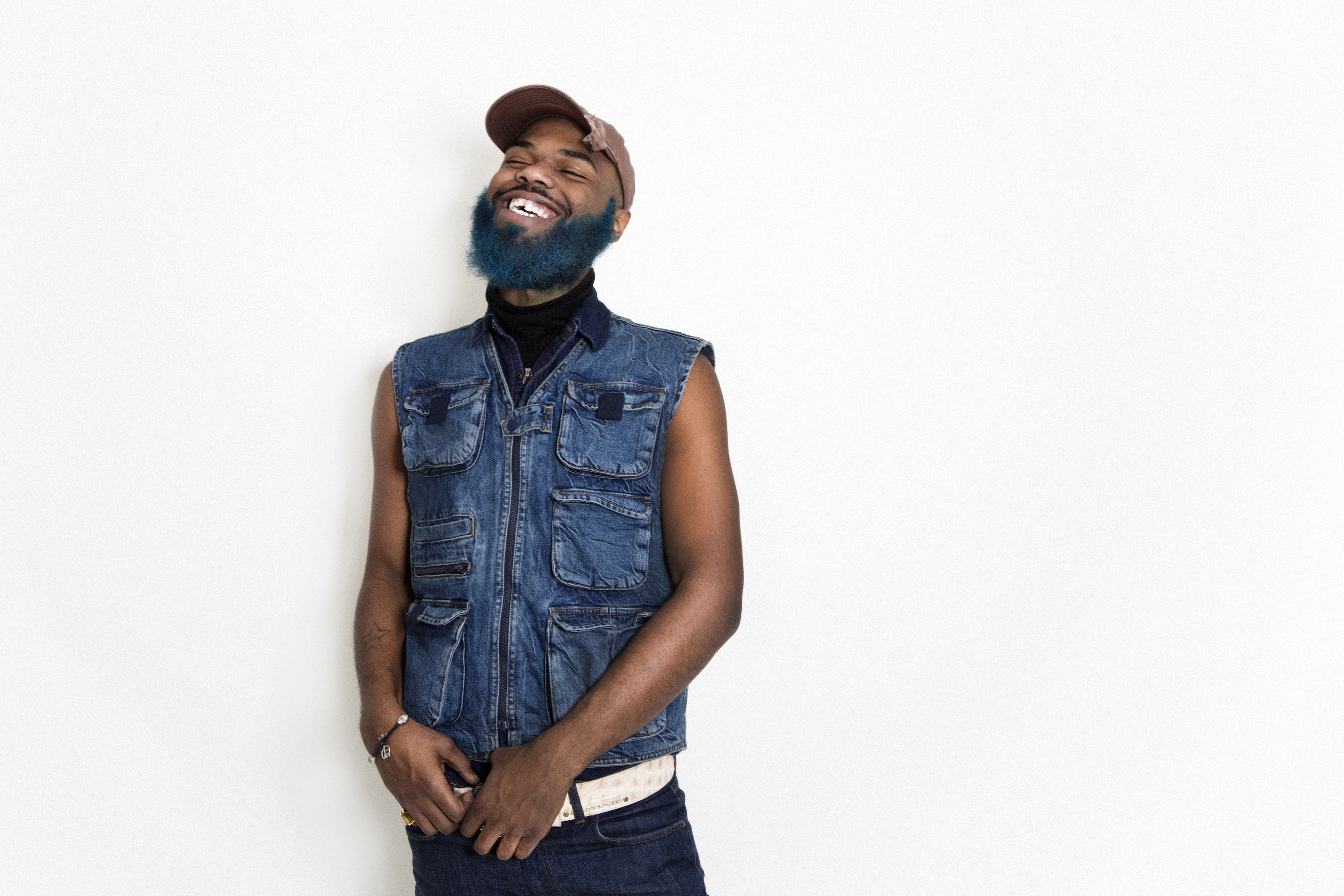 “If the ratchet shit didn’t exist, we wouldn’t appreciate the deep music, and vice versa”

How has having children affected your music?

It gives me a lot of focus. I can wile out a little bit, but I’m not one of these young artists out here that can fuck around. I have two people — they’re seven and three — to provide for and make sure they’re good. It’s kind of a checks and balances system. And I go hard with the music because I want to provide for them and hang with them. It’s beneficial, because to be honest, I don’t really know how focused I would be or how many late nights I would be putting in if they weren’t existing.

On ‘Pay Back Loans’, you seem to be concerned with separating business from real life. Do you think about how much time you’ve got to do what you’re doing now?

I’m just trying to make as big an impact as quick as I can, that’s really all I’m thinking about now, and making sure my sons is right. I don’t think I’m going to be doing this in my forties and all of that shit, I just don’t think so. Right now, there are so many new acts popping up, getting better and better – the evolution is becoming quicker, you know what I mean? One thing you can’t fight is age. I’m not saying I’m getting old, but I am being realistic.

I’m not gonna be like, “Oh man, I’m doing this shit forever because I’m gonna be the hottest!” Nah, man. Maybe do some shit like Andre 3000 – make a crazy classic and be out, and then when I’m 40, be like, “Maybe… maybe I’ll give you motherfuckers an album.” It’s cool to see everybody get shine, because if the ratchet shit didn’t exist, we wouldn’t appreciate the deep music, and vice versa. Everything needs its time to shine.

There’s definitely that musicality, those jazz and electronic touches, on this album. It seems like there’s been more of a return to that in rap…

Yeah, because it’s so easy to cook up some shit in [Fruity Loops]! I know so many people who can make amazing music like that. I was doing support for this jam band Lettuce, and [my manager Mike Boyd] overheard someone saying, “That’s really good stuff, but it’s like karaoke.” People don’t respect rap, because it doesn’t take a lot of skill sets to make a song or a body of work. A lot of artists, especially the ones I run into, say there’s too much [of one type of rap]. And it’s fun, man, you can hear so many fun little things – “Oh, that’s an open hi-hat, that’s a closed hi-hat.” Everything has its place, but I feel like that’s becoming a thing because people want to impress.

I fuck with Kendrick, and I don’t like To Pimp A Butterfly too much as far as replay value — I just want to listen to something and move on — but that album took so much time and effort and care. That’s gonna separate what we do from the other shit. It’s coming back, man. It took me a minute to respect it, too. It’s just the evolution — you grow, you want to be better, and have a bigger impact.

I know you have jazz musicians in your family – was that something that you thought they did and you didn’t?

No, it was more I think rap is the cool thing. It had nothing to do with the musicality, just all the people that I think are cool rap [laughs]. Now as I get older, I get to see and learn more about music and why the greats were the greats and it inspires me to be mentioned with them.

“This material shit, it doesn’t matter”

So, as far as your fans…

Hell yeah! I wanted you to talk to me about that shit.

With most artists you see a lot of retweets and whatnot, but you really get into it with people. What is that like?

It’s crazy. It takes away a lot of the wondering what my music does for people, because I’m becoming close to a lot of them. A lot of my fans can text me or FaceTime me. Yesterday, one of my fans FaceTimed me — he makes clothes, I told him his shit was dope, and he brought me some clothes. It’s cool to connect and inspire kids. Everybody has aspirations, it’s cool to really inspire people and see that inspiration and let them know I’m a human being too, there’s no cool shit here, it’s all love.

Going to a city and knowing kids to hit up in each city is cool, because you know who really cares. I don’t care if a million people buy the album. If 100 people bought it and they were dedicated to it and it moved them in some capacity, that’s what I’m about. If you’re making quality shit, and not doing dumb career moves, the numbers will grow and give you longevity. That what will have people begging for an album when you’re 40.

It’s so funny, these artists want to get popular so fast, they imitate what’s good or what’s popular right now, and they just don’t know. The kids who are the artists that pop up out of nowhere and have all of the Vines and all of that stuff, they disappear so quick. We’ve seen it — we can name ten artists in the last year. Do something that’s worthwhile. I can’t say timeless, but just worthwhile.

What do you see for yourself, after rap?

I definitely want to do performing art schools for kids who can’t afford it, that just have raw talent and drive and dedication. I got some homies in New York who have been putting me on to what matters — this material shit, it doesn’t matter. That’s such a popular theme in rap and hip-hop, what you have constitutes how much worth you have. Whatever I can do to make rap not so cliche, to have people respecting it and respecting me for changing it. I’ve been getting a lot of DMs and Snapchat from kids saying, “I appreciate what you’re doing for hip-hop” and that’s dope, that’s really cool for me. Everything man, I’m trying to be philanthropist Rome, doing dinner with Oprah.