It’s been a fertile few years on Hausu Mountain.

Founded by Doug Kaplan and Max Allison in 2012, the Chicago-based tape label’s channeling of imprints like Aaron Dilloway’s Hanson and the Residents’ Ralph Records has seen a singular niche carved in the avant-underground. The label has released cassettes by artists as diverse as Lockbox, Tiger Village, Mondo Lava and Eartheater across the axes of free music, basement noise, tropicalia, IDM and glacial synth pop, often tied together via an aesthetic of kinetic anime and anachronistic video game imagery. Even in an era flush with great outsider labels working across multiple formats – Baked Tapes, Orange Milk and Haord among them – Hausu Mountain is impressively consistent.

The label’s eclecticism is reflected in the bold creativity of Kaplan and Allison’s Good Willsmith, the trio they play in with TALSounds’ Natalie Chami, and through which they have spent the last four years traversing the outer reaches of semi-freeform, loop-based music. They’re currently Chicago’s best-kept secret, but that oversight is set to change with a new full-length on the Thrill Jockey-distributed, Mexico City-based Umor Rex label.

After an ill-fated Craigslist request that drew a lone, Tori Amos-obsessed respondent, the band materialised after being introduced at a show Chami was playing under her solo guise in 2012. Kaplan and Allison’s formative influences were broad, from drone, ambient, early electronics, metal and noise, to 1960s and ‘70s minimalism and Indian classical music, as well as “basement-to-mainstream artists” such as Emeralds, Oneohtrix Point Never and Son Araw (and, in Kaplan’s case, a lifetime obsession with the Grateful Dead).

Chami’s path was quite different. “My only influence was that I was playing synths a lot by myself,” she says. “I didn’t make beats. I didn’t really know anything about ambient or experimental music or that it was even a genre – honestly! But early on in my synth playing I met a friend who exposed me to more ambient music and it was like, ‘Oh my god! I’m not totally weird!’”

Their first jam session in February 2012 became the band’s inaugural, digital-only release, How to use 33 “Passion Keys”, a miasmic fug of ambient noise and interstellar feedback that laid the groundwork for the group’s central creative tenets: structured improvisation and live recording with no overdubs. A first cassette, Is The Food Your Family Eats Slowly, followed on Hausu Mountain five months later, fully kickstarting a project now on the cusp of broader acclaim.

The group’s new full-length, Things Our Bodies Used To Have, represents the final chapter of a trilogy along with their 2014 albums Aquarium Guru Shares The Secret Tactic, released on Baked Tapes, and The Honeymoon Workbook, on Umor Rex. The three albums constitute a conscious segue from the 40-minute freeform sprawl of the band’s early recordings towards more melodic, rhythmic and concise compositions; structures which clicked into place after a cycle of repetition and were then “workshopped over the course of a tour, over 10 to 20 performances”. 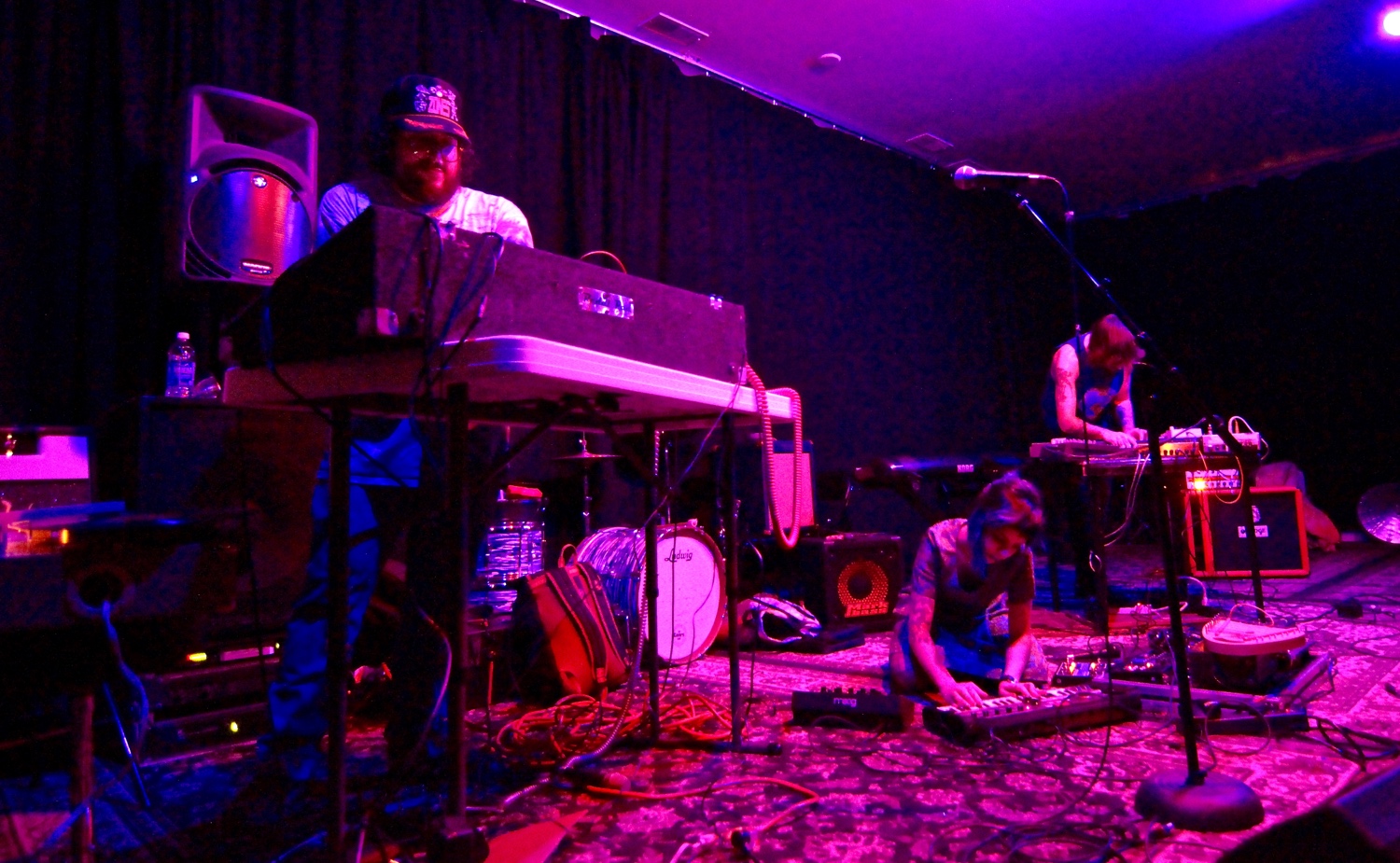 “[We’re trying to] propagate nonsense [and] confuse people in a stimulating way.”

All three albums “represents more than a ‘free improv’ vibe,” say Kaplan and Allison of the creative process behind the trilogy. “Many of our tapes capture more free, unstructured sessions – or short ideas that stand alone as little bursts. Each of these three albums ended up being shorter than the last, and kind of more tightly structured. We shift through different sketches at a faster pace now, and reach a climactic moment where we deem a certain passage ‘done’ way more easily than before. This is a symptom of listening to each other better while we play, communicating better with each other in and out of live performance, and knowing each other better in general.”

This structured improvisation is the “one thing that is crucial to the identity of the band so far,” says Kaplan, though they’re all keen to point out that the only preconceived passages tend to be melodic figures rather than any complete form or texture. “Rehearsed moments”, says Allison, “are virtually absent in our early material.” Their new work, however, is conspicuously more “songcular”, says Chami; live, the group plays along to Allison’s pre-recorded framework of beats, which Kaplan and Chami approach as soloists. “We still plan on recording the new material live without overdubs,” says Kaplan, “but I wouldn’t say we’d never record a studio album proper. Life is long!”

As a means of developing and rehearsing overall suites, the band even use graph-like scores to help guide the direction of a track. “The x axis is time,” explains Kaplan, “and the y axis is complexity or how many loops we have going at once.”

Dense, textural and headily psychedelic, Things Our Bodies Used To Have is as redolent of the neon throb of Vangelis and Dylan Ettinger’s New Age Outlaws as the blackened drone and abstract kosmische of their 2014’s live tape 14 Years of Desperate Research and 2015’s Snake Person Generation.

By fidgeting between atmospheres and tones, it demands repeated spins; Kaplan’s abject, blown-out guitar solos (half cod-virtuosic wailing, half sheet-noise) sit side-by-side with Chami’s layers of keys and manipulated vocals, oscillating washes of synth and pitched-up tape samples, drawn in some cases from sources as mundane as a McDonald’s Halloween cassette (“Definitely not the first time that a McDonald’s piece of media has made it into our music,” laughs Kaplan).

Perhaps surprisingly, all three members are resistant to, or at least ambivalent about having a shared ethos or manifesto regarding their music. “For us, it’s less about what we’re trying to project onto the audience, or the ideas and theories that our music might evoke,” Allison explains. “We don’t think of any of that when we’re playing or making music. It’s more about the feelings that we feel while playing with each other. The atmosphere, the mood, the general transportive state.” It’s no coincidence that live, by Kaplan’s admission, they play at punishing volumes, approaching the performance as “a kind of ecstatic group event, a spiritual shared release”. “It’s addictive,” adds Allison, “and extremely fun for us.” 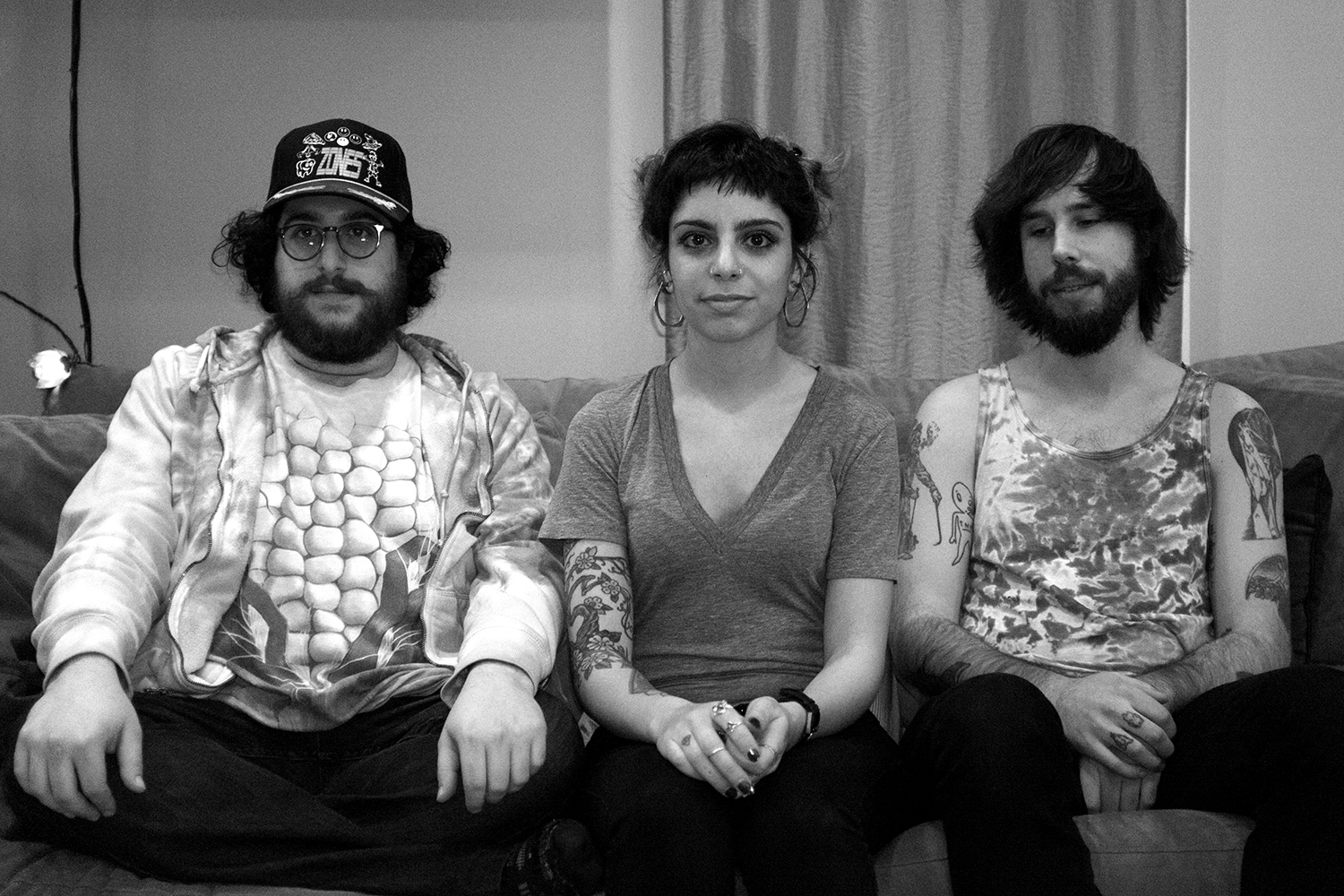 Speaking about the ethos (or lack thereof) behind the band during an earlier Skype call, Chami likewise emphasises her belief that art doesn’t require a purpose in order to be legitimate. Rather than grafting meaning onto their sessions, they suggest, they’re trying to subvert and distort it, to “propagate nonsense [and] confuse people in a stimulating way”.

This helps explain the wildly fluctuating tone across their oeuvre, from the McDonald’s tape samples (pitch-shifted to a chipmunk shrillness) and titles snatched from Upworthy, Horse_ebooks and other internet flotsam (‘These Kids Aren’t Alright’, ‘What Goes In The Ocean Goes In You’, ‘Whales Sing Great Melodies With Fantastic Voices’) to the frequent references to sonic extremity, chaos and tumult in Allison’s explanatory texts on Bandcamp. The latter are confounding, but Allison insists there’s no artifice. Good Willsmith are a fringe proposition in anyone’s book, but they’re also jocular and knowing, their music too dense and playful to be abject, and too colourful to be remotely nihilistic. Despite occasionally utilizing imagery more readily employed in harsh noise and black metal, Allison insists that “extremity” is a subjective qualifier, linked to texture and feeling rather than aggression and confrontation. “We acknowledge that our music is nowhere near as ‘extreme’ as many of our contemporaries,” he says. “So many projects have blasted off into totally insane territories that we can’t even imagine.”

Ultimately, the band’s shared – if largely unspoken – goal seems to be a more spiritual: reaching for higher planes through the transportive power of sound. Their collective aim lies in conveying a “body music – a more physical experience, something that seeks to erase or modify consciousness. A kind of cleansing, a trance state.” It’s a melding of the tactile and the cerebral, unfettered by theory or sonic touchstones.

“That,” Allison concludes, “is what we’re trying to tap into.”