No small deal – but the capacity audience is already getting their money’s worth from a bearded man desperately trying to keep in check an insubordinate trio of analog tape machines. From a table at the front of the crowd, spools of thin magnetic tape stretch 15 feet in two directions, across and into the throng. They’re looped over repurposed mic stands at the end of each rotation, their movement only visible via tiny pieces of connective tape trundling through the shadows. As the tape loops, a crepuscular tone somewhere between a shriek and an enveloping fuzz begins to build – a wash of siren and foghorn samples, though too transfigured and pitch-shifted to be definable as the source material.

Howlround is technically a duo, but with one half – sound artist Chris Weaver – absent on residency in Dubai, it’s left to Robin The Fog to attempt some damage control as the spools spin out. Normally Robin changes the loops and samples as Weaver runs the mixing desk. Solo, he sticks to the latter. The sheer length of the tape is a makeshift necessity (with no means to alter the source material, longer spools means more sonic variation) but it’s still a stretch. The tape needs to be kept taut to run properly, and the archaic machines – a set of 1970s UHER 4000s – are temperamental at best. One promptly jams. A visibly fevered Robin fiddles with the gear-shift to a soundtrack of smeared klaxons. Robin picks up a machine and shakes it. One of the spools putters around its mic stand.

The scene is almost absurd, and very British; a Cleesian visual element to a superlative chorus of outsider sound art. Concrète theatre. The drone thunders on, temporally alien and multilayered. Defeated, Robin places the machine down and lowers the squall. “That’s as good a place to stop as any, I suppose,” he says. Oto cheers. It’s glorious. Drone isn’t supposed to be fun, is it?

“I read a great quote,” Robin says later. “‘Truly experimental music has to have the ability to either be a huge success or a catastrophic failure.’ With our performances, both are valid.”

“There’s a definite correlation between jungle and musique concrète.”

Whether working solo or as part of Howlround, Robin The Fog is one of the British avant-garde underground’s most interesting practitioners: a musician-cum-documentarian creating an immersive form of concrète that channels both post-Radiophonic soundscapes and a warped, microscopic take on field recording. His work has been described as both “the ultimate hauntological artefact” and “the very last piece of true Radiophonics”, by no less authorities than Simon Reynolds and Ghost Box’s Jim Jupp, respectively.

He’s best known for 2012’s Ghosts of Bush, the haunting ‘sonic portrait’ of London’s Bush House, former base of the BBC World Service, which he recorded at night on the building’s dormant tape machines while working as a studio manager. Ghosts of Bush was followed by records that again found their source material in abandoned or mundane locations, from an old Serbian customs house (2013’s Songs of Savamala) to a squeaky garden gate in London’s Hither Green (2014’s Torridon Gate, produced as part of a Resonance FM fundraiser). Last November saw the release of Tales From The Black Tangle on Robin’s own imprint, The Fog Signals, the first Howlround collection to draw on multiple, disconnected sonic wells (foghorns, sirens, mic cradles, children) as well as external narrative sources. It’s the pair’s richest, relatively most musical work to date. (And, alas, already a collector’s item, its tiny 250 print run selling out almost instantaneously.)

Robin’s route into the academic realm of concrète was, perhaps surprisingly, via jungle and hardcore, “my first love,” as he explains in a Penge pub garden a few weeks after the Oto gig. Prior to the inaugural experiments with tape loops that would become Ghosts of Bush, Robin was one third of the glitchy breaks unit Liberation Jumpsuit, and also released a 7” of lo-fi, junglist breakcore as Smack Miranda (he cites the single’s B-side ‘Freeform Geshundheit’ as one of the best thing he’s ever written), both offering early parallels to his current practice.

“There’s a definite correlation between jungle and musique concrète,” he explains. “When I was at uni, someone played me a piece of concrète that was all made out of a door handle. And it had that thing that I loved about jungle – all the syncopated rhythmic structures and deep bassy drone, lots of tension and release. These weird sonic textures. The things that appealed to me about that were the things that appealed to me about hardcore and jungle – a lot of those early records were quite avant-garde. Maybe unwittingly, but still really forward-thinking.” 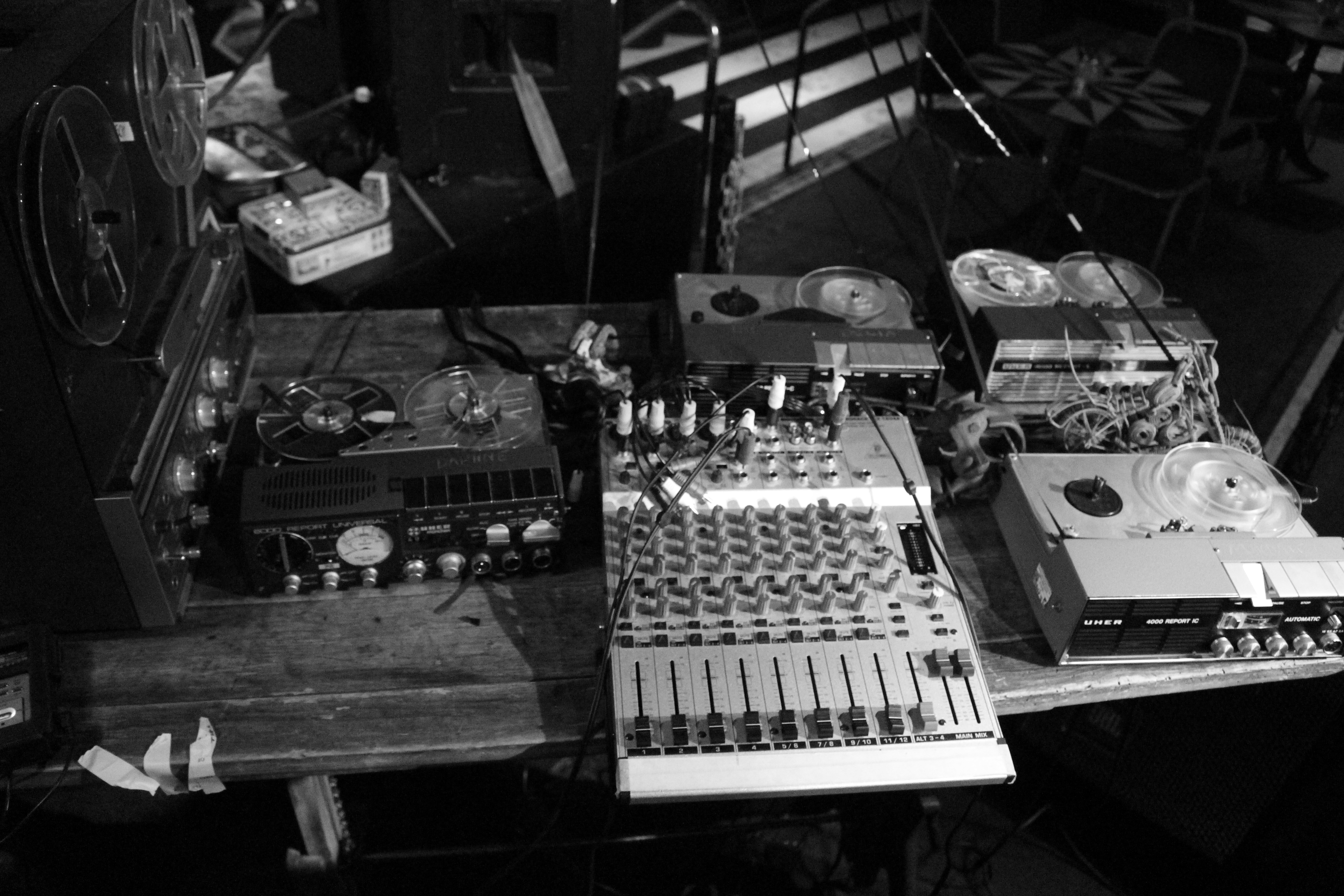 After Liberation Jumpsuit came four years of creative stagnation (“It just seemed that I always knew what I was going to get when I sat down in front of my laptop to make stuff,” he says of the lull), but at the same time he was jobbing at Resonance FM, working in production at the community radio station and “learning about how to create a narrative using disparate bits of audio”.

The job eventually led to a studio manager role at the BBC’s World Service, a transition that would prove fortuitous. “The moment it all came together was one night about 4am, when I recorded myself whistling in one of these lovely old halls into a mobile phone microphone,” he says. He’d had some basic training in tape splicing, his interest first pricked by the recordings Alexander Tucker’s Imbogodom had made in the basements of Bush House. “The [tape] gear was set up, so I held the speaker of my phone up in front of this mic, played the recording, dubbed it on to tape and played it back at half speed. This ethereal choir noise came out.”

Traipsing around the studio’s empty stairwells and corridors after hours, Robin drew together the recordings that would become Ghosts of Bush, rushing the tracks together after hours, never quite confident that either the machines or tape spools would still be there the next morning. The record’s creation myth is neat – and almost certainly the reason for the album’s inflated reputation compared to Howlround’s other releases – but it’s a disarming work; “the sounds the building makes when it thinks no one is listening,” as Robin describes it in the sleeve notes. The process – samples dubbed onto tape and carefully manipulated into concrète vignettes – opened up the potential of ubiquitous, microscopic and untapped sound.

Robin cites Alvin Lucier’s 1969 tape composition ‘I Am Sitting In A Room’ and Jacob Kirkegaard’s 2006 Touch release 4 Rooms as significant influences, but the elephants in the room are, of course, the legacy of the Radiophonic Workshop and, to a lesser extent, the “hauntological” movement associated with the likes of Mordant Music and the Ghost Box label. There are inescapable links to the former, even if he stresses that his work is “a very respectful homage” to the Workshop, rather than part of its lineage. But the Workshop permeates his tinkerings in myriad ways. There are the names of his machines (Daphne, Delia, Elizabeth and Magdalena, in tribute to the four Radiophonic women); his job at the BBC; his own instruction on the Ghosts of Bush sleeve to “File under Radiophonic, if I may be so bold”; and the frustrating coincidence that Matthew Herbert – nominal head of the as-yet functionless New Radiophonic Workshop – was commissioned to create a “sonic portrait” of Bush House a matter of months after Robin had done exactly that. 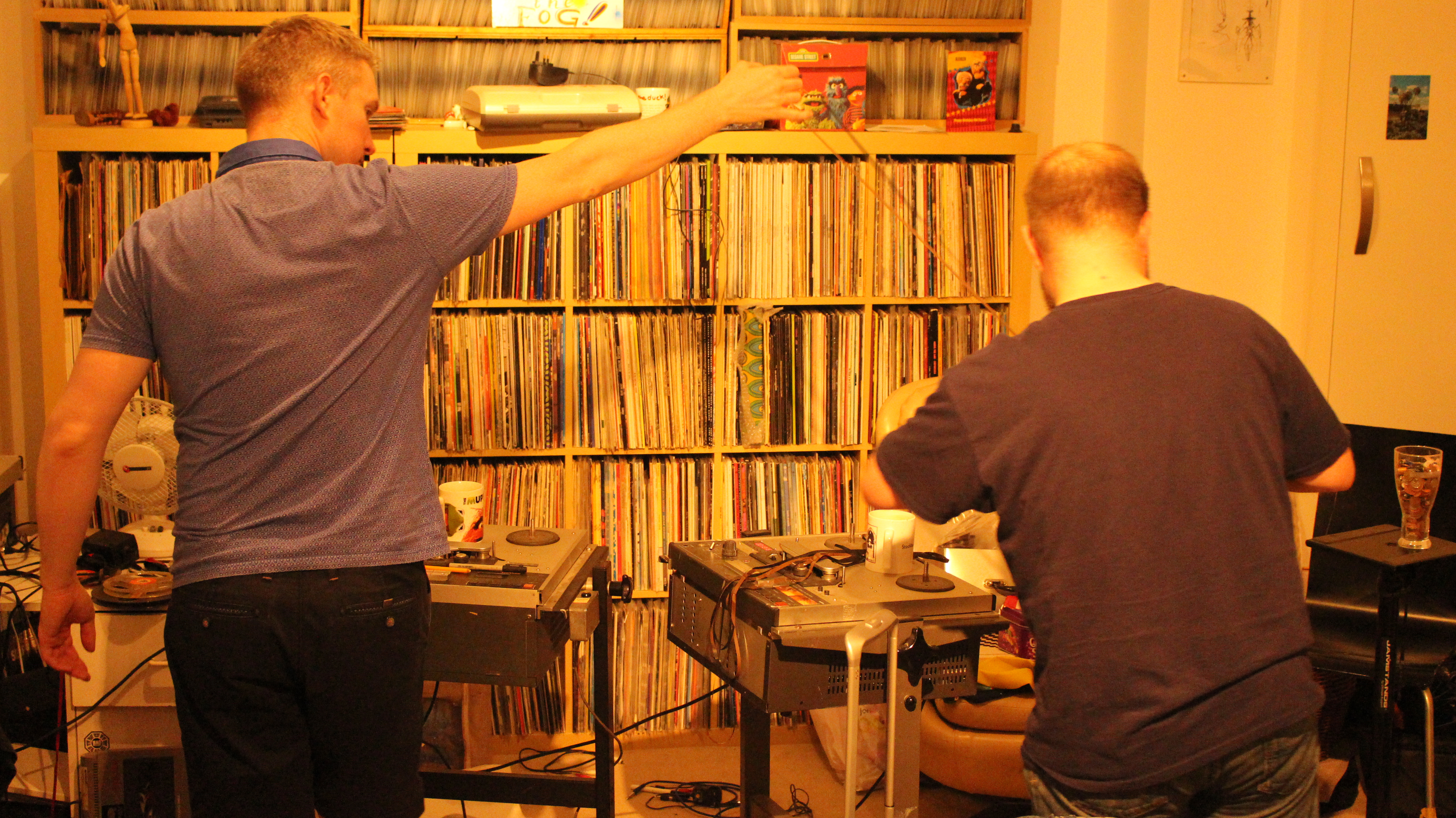 “All it needs is a shift in perspective and there’s a hidden world to be teased out.”

Robin is more comfortable working under the broad concrète banner. He recently read Pierre Schaeffer’s 1952 treatise on the topic, In Search of A Concrete Music, in which the composer works the newly birthed discipline into a history of western classical and operatic music. He sees Schaeffer’s ideas as applicable to modern records too. “What I’d really like to do is actually make a jungle record using the techniques of musique concrète. It may well happen!”

Like Howlround’s previous records, last year’s Tales From The Black Tangle finds its source materials in man-made objects and abandoned spaces, but is also the duo’s most accessible work yet. ‘OH’, with its fluttering wind chimes warped samples of Abandoned Playground’s Ray Carman speaking to his daughter, is as close to pastoral electronica as Robin has ventured, while the undulating honks of a squeaky microphone cradle in ‘Mount Shock’ possess a Badalamentian lilt.

Most interesting are ‘A Startled City’ and ‘A Viewless Sea’, the first works Robin has composed that have a defined narrative bedrock. The former draws on a mass hysteria incident in Indianapolis in 1919, during which the city’s residents began anticipating the apocalypse when train whistles and factory sirens across the city blew in unison. The latter is based on The Fog Horn, a short story by Ray Bradbury which equates the titular sound with a prehistoric monster’s cries. The tracks are composed of industrial sirens and foghorns, respectively.

A heightened visual element plays an integral part in the next Howlround release, an as-yet-untitled audio-visual collaboration with artist Steven McInerney. The film explores the growth of lifeforms on a micro and macro scale, inspired by cymatics, primitive sci-fi movies and Charles and Ray Eames’ 1977 film Powers of Ten, in which the depths of the known universe are displayed by zooming back and forth, from the entire cosmos down to the protons in a carbon atom.

The record is done, the film not quite, “but the rough cut is looking fantastic,” says Robin, “and as I always say, these things are worth taking extra time over.” It will also be the first of his releases not to appear on The Fog Signals, but McInerney’s Psyché Tropes – a label “dedicated to exploring the synaesthetic intersections between sound and its visual counterpart” – represents a meeting of minds. “It’s the best thing I’ve ever done,” Robin states. “Though I say so myself.”

Since those first experiments in the depths of Bush House, Robin’s ethos has become rooted in an obsession with sounds wrought from the inanimate and dull, in man-made places left unpopulated. He delves into the microcosmic layers of human culture, into a “sound world that’s just below the surface”. Robin’s self-given role – and that of the concrète artist in general – is to scour for these sounds. “All it needs is a shift in perspective and there’s a hidden world to be teased out,” he says. “It’s amazing how quickly a sound can lose its moorings and float off into this kind of unchartered territory. Sometimes things can be so banal they’re psychedelic, so ordinary that, sometimes, they become impossibly strange.”

Read this next: A guide to Pierre Schaeffer, godfather of sampling