The Republican is threatening to sue after Banks tweeted “Let’s find the biggest burliest blackest negroes and let them run a train on her.”

Azealia Banks has been forced to apologise to Sarah Palin after appearing to suggest the Republican politician should be gang-raped.

The rapper was responding to fake quotes attributed to Palin on satirical site Newslo, in which the one-time Governor of Alaska is described as saying “negroes loved being slaves.”

“Sarah Palin needs to have her hair shaved off to a buzz cut, get headfucked by a big veiny, ashy black dick then get locked in a cupboard,” Banks wrote on her recently reactivated Twitter. See screen grabs of the tweets below, via Mediate. 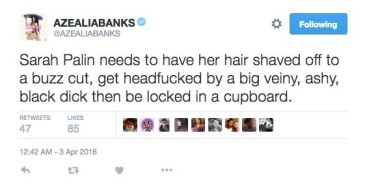 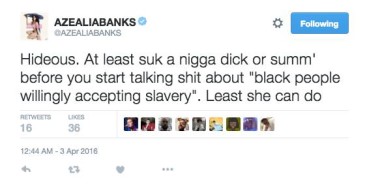 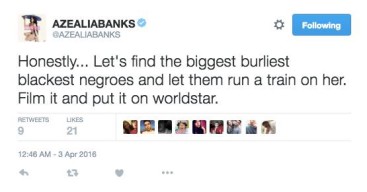 Palin then responded via Facebook: “Hey Female Rapper – listen up, little darling. No one has any idea what you’re wigging out about in these bizarre, violent rants against me, but you’re obviously not exercising enough intelligence to acknowledge you’ve been sucked into believing some fake interview in which I supposedly offered comments representing the antithesis of my truth.” She then slammed Banks for the “anti-woman, pro-rape garbage that you seem to endorse.”

Banks has since apologised on her website for “any emotional distress or reputational scarring I may have caused you.” The rapper insisted the comments were meant as a “racially driven joke to counter what I believed to be real, racist rhetoric,” and added that she did not imply Palin should be raped: “I used the term ‘run a train,’ which is slang for group sex, NOT for ‘rape'”.

Palin is understood to be not happy with the apology and issued a statement explaining she’s in talks with attorneys about legal action against Banks. “I’ve had enough of the unanswered threats and attacks against my family and me. So, for the first time I’m going to enjoy the only retribution some protected ‘celebrities’ seem to understand — I’m suing Azealia Banks and can’t wait to share my winnings with others who have gone defenseless against lies and dangerous attacks far too long.

“Let’s be honest here: if a white girl were to say what this black girl is saying, the screams for the entire white population’s head would be louder than the nonsensical rap that Azealia spews all the way to the bank. The white girl would probably be locked up.”

Banks however is now claiming the tweets are covered by “Freedom of Speech girllllyyyyy.”

LOL, if Sarah Palin actually decides to sue me i'll only use the controversy to make myself an even larger American Cultural Figure.