Riot grrrls in the yard: Atlanta’s BOSCO and Speakerfoxxx bring their secret language to Fool’s Gold

Hanging with BOSCO and Speakerfoxxx is like being invited to a fly girl slumber party.

At their hotel room in the Meatpacking District’s Soho House, the Atlanta-based duo are boisterous not just because of the excitement for their upcoming first collaborative release — a mixtape called Girls in the Yard out April 11 via Fool’s Gold — but because of their decade-long friendship and the secret language they developed over the course of making the tape.

For the uninitiated, a link between the two is a bit of a head-scratcher. BOSCO made waves last year with her alternative soul EP BOY (also released on Fool’s Gold), while Speakerfoxxx has long been known for her ties to Dungeon Family — the mixtape was recorded at OutKast’s Stankonia Studios — and her Southern rap acumen. But the confluence of both of their styles and their vibrant tastes in music (reggae, dance music, pop, and more) allows them to build a neon-colored dance party that is equal parts bashment and warehouse party.

FACT spoke to the pair before their performance at Soho House’s Vinyl Room about finally getting to work together, the pastiche influences of Girls in the Yard and the “hotness” of women hanging out casually.

You guys have been friends for a really long time, so why wait until now for the first collaborative project?

BOSCO: The universe kinda did it. We had intentions of working together for a very long time, but the universe and the stars really aligned for now. I respected her in her area and she respected me. We were both females in Atlanta doing our thing. But I wanted to do a mixtape and she said, “I think that would be cool,” but she was supposed to be out of town with Master P. I never thought doing this mixtape would come from that. I wanted to do something a little bit different this time. I wanted to be aggressive, I wanted to yell, I wanted to get out of my comfort zone. I felt working with her, I was more comfortable to express myself in a different language with another female. With girls, it doesn’t have to be said.

Speakerfoxxx: BOSCO and I have always wanted to work together, but we didn’t know how. We were kind of in two different lanes and BOSCO was killing it in her respective lane, she was kind of doing — and keep in mind, both of us listen to all different types of music — she was killing it doing a lot of house-y, ambient electro, just beautiful soul-provoking music and I was becoming more known for playing a lot of Southern rap music. We didn’t quite fit together.

BOSCO: So they thought!

Speakerfoxxx: We’ve always respected one another and supported one another, gone to each other’s shows, post each other’s fliers. We just support each other’s brand. Up until I guess about December, we were just really trying to work on strengthening who we were [respectively] in our place in the world of music. I think we felt comfortable enough and, like BOSCO said, the universe allowed for it to happen. Things fell apart, in a sense, in such a way that allowed us to come together and to have the time to start this project. Once we started it, it was just a lot of fun. 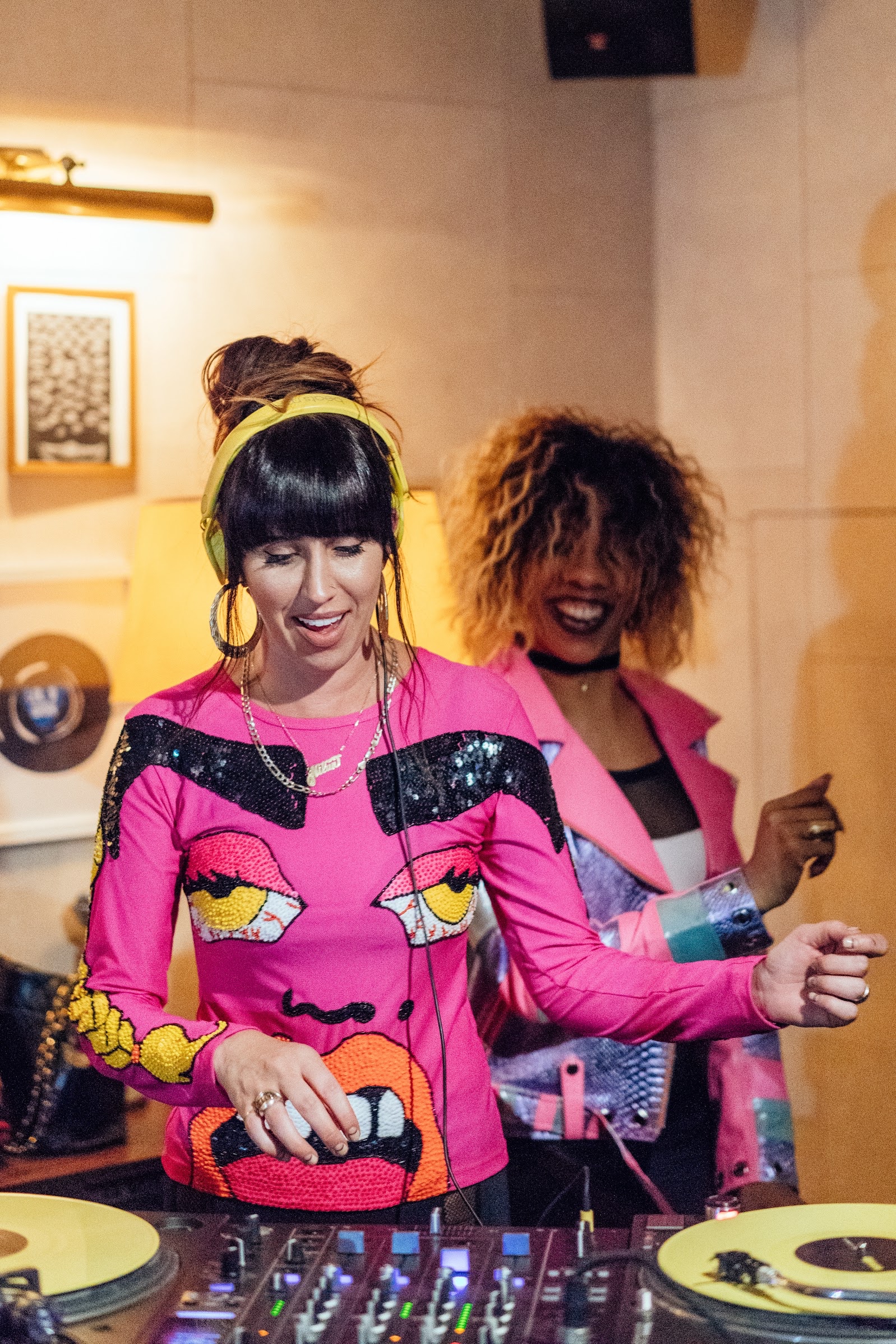 One of the things that is a lot of fun about the tape is how seamlessly it pulls from different influences, including a lot of really popular songs like Beenie Man’s ‘Who Am I?’ and Missy Elliott’s ‘Hot Boyz’ — but especially fun is your flip of ‘Black Box’ by Everybody Everybody. How did these things get worked in?

BOSCO: [Gets up and starts dancing] We literally were just like [dancing around the studio] singing “booty on the floor, booty on the floor” [to ‘Black Box’] and that’s how we wrote the song.

Can you tell me a little bit more about what influenced the sound? You guys are both vets, but some of this is a little bit out of what we’ve come to expect, respectively, from both you.

Speakerfoxxx: When BOSCO first moved into my house, we kind of thought, ‘OK, we’ll make a mixtape’ and we sat down with my iTunes and put together tracks that we liked the sound [of], like reference tracks. Songs that maybe we would draw inspiration from or songs that I was gonna sample from. I had a crate in my iTunes called BOSCO Mixtape and in that we had Cece Peniston “Follow Me”, Terror Squad, Dipset, a lot of J Dilla, we had Tweet, a lot of Missy. When we started writing, I would keep referencing that crate of music. A lot of those ended up being interludes for the mixtape.

How did you guys end up living together while working on this?

Speakerfoxxx: She lives in LA and New York, she doesn’t live in Atlanta.

BOSCO: I was supposed to go home for Christmas. That shit fell apart.

Speakerfoxxx: There were all those storms during Christmas. I was supposed to be out of town for Christmas.

BOSCO: Shit just literally kept us working on this.

Speakerfoxxx: I have two bedrooms in my house and I don’t have any roommates. So we lived in this project, literally.

I think there is something about living with the people you create. It’s so much easier to create with people you’re bonded to. Your vision becomes even clear.

Speakerfoxxx: We were laughing about this tonight: we actually started talking like each other. We have the same mannerisms. We’ll say the same thing at the same time. 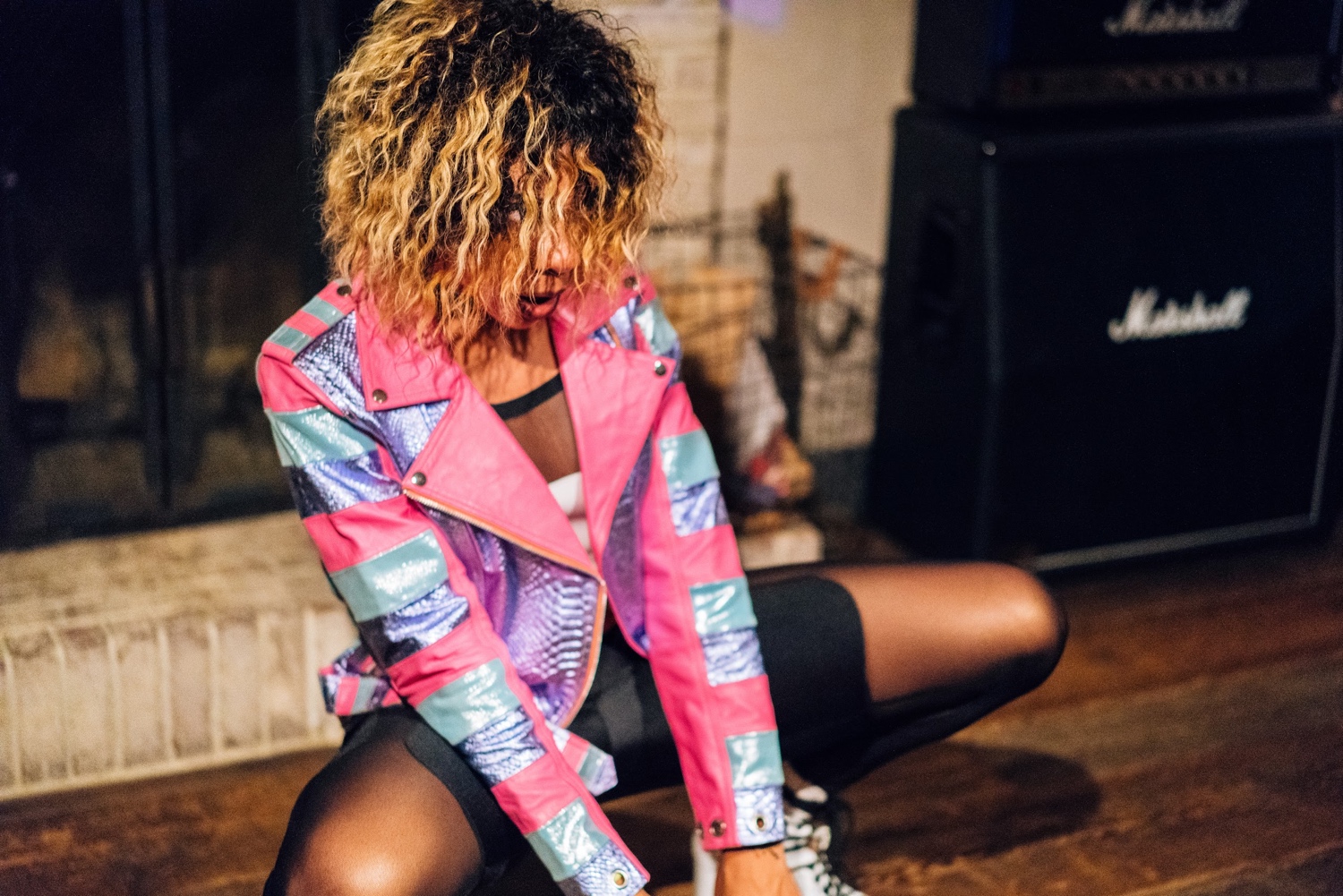 “There’s a power when it comes to women hanging out very casually and all together. It gets overlooked”Speakerfoxxx

So you guys have your own language now?

Travon, BOSCO’s manager: They do.

BOSCO: Girls in the yard have that giddy language.

I was curious about the title Girls in the Yard – it seems very indebted to images we see in a lot of southern rap videos, as well as, at least conceptually, “yardies” in Jamaica.

BOSCO: Speakerfoxxx is very influenced by reggae — the music, Jamaica, when she visited there, she really liked it. I’m from Savannah, which is a very water, beachy kind of place, so I listened to a lot of reggae, as well. Dub, specifically. But we were just thinking of concepts and we were listening to…

BOSCO: And it’s always “boys in the yard” and we just wanted to do the role reversal and do a call to action for girls. She made a great point [previously] – we’re not alienating men, we’re just reminding the femininity energy of their place and encouraging them to really rise to the top and push forward in culture and music and fashion. Any specific creative field that they want. It was very important for us and solidified in my relationship and demonstrate that, to reinforce that through the music, to reinforce that through the visuals, the style.

Speakerfoxxx: I made a mixtape called Dopegirl Anthems and it was hosted by Gangsta Boo. We had all of my girlfriends hanging out on a stoop because growing up in the south, you’re on your staircase, you’re on your front porch, you’re on the stoop. You sit and you drink and you smoke, play dice. Normally in art or in history you see groups of men doing that, but there’s something super hot and super powerful about recognizing that women are doing the same thing. We’re sitting around smoking our Newports —

Speakerfoxxx: There’s a power in that, there’s a super hotness in that. I think it’s overlooked a lot of times. But the world is just starting to tap into [it]. I felt it in Beyoncé’s ‘Formation’ and – what was that Rihanna video that was shot in Jamaica that was so hot? ‘Man Down’. There’s a power when it comes to women hanging out very casually and all together. It gets overlooked. We’re strong and I think that a lot of times women disenfranchise themselves and forget that when you come together and you’re just hanging out, even on the casual — the other night, BOSCO, our friend Alicia and I, we just were hanging out in the yard, threw down a blanket, were watching the stars.

BOSCO: Constellation apps! It was so good!

Speakerfoxxx: We didn’t need guys around. And that’s what it’s all about. Girls in the Yard is all about that.

It also reminds me a lot of the “girls to the front” sentiment from riot grrrl. You know, we’re not going to hold your jacket in the back of the show, we’re going to dance, too.

Speakerfoxxx: That’s exactly what it’s like: Bikini Kill, riot grrrl. What band were you talking about the other day that you love?

Speakerfoxxx: It’s all those girl punk rock bands, I draw a lot of inspiration from them.