Photographer sues Spotify over use of Notorious B.I.G portrait

Spotify is being taken to court by Dutch photographer Dana Lixenberg for the unlawful use of her portrait of The Notorious B.I.G, which appears as the background header on the rapper’s Spotify artist page.

Lixenberg filed a lawsuit for copyright infringement seeking a share of profits, statutory damages, costs and attorneys’ fees. She claims Spotify took her images and used them for artist pages without consent and without fair compensation. A recently filed complaint in a California Federal courtroom states “not content to solely rip off the musicians on whose backs Spotify has built an 8 billion dollar company, Spotify has expanded its efforts to also include ripping off photographers.”

The portrait of the late Brooklyn rapper was supplied to Spotify by a secondhand party, All Media Network, which is a co-defendant in the case. The filing further argues that “a comparison of the Subject Photograph with the Accused Image reveals that the elements, composition, colors, arrangement, subject, lighting, angle, and overall appearance of the images are identical or at least substantially similar.”

Neither Spotify, nor Lixenberg have publicly commented on the case yet. Should it go ahead, and should the photographer win, it could open a new can of worms for streaming companies. [via Complex]

Last week, it was revealed that the average annual salary at Spotify increased 152% in five years. 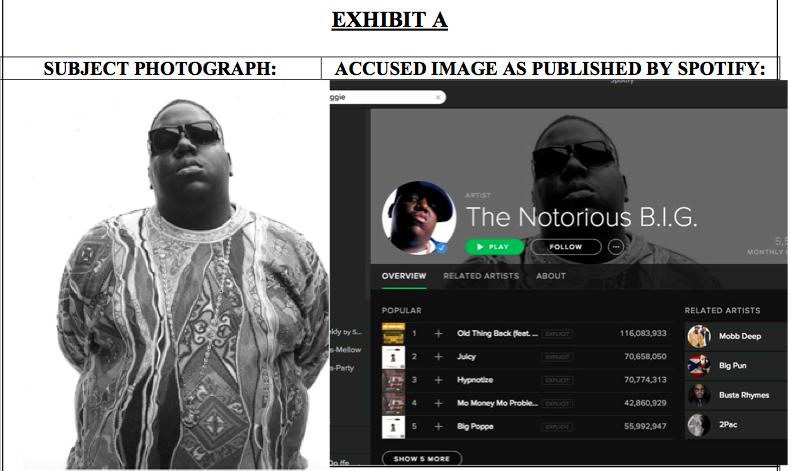