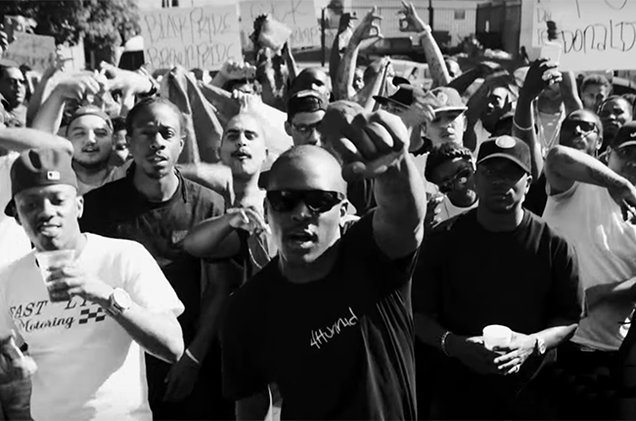 LA rappers YG and Nispey Hussle were the musical guests for last night’s episode of Comedy Central’s The Nightly Show where they performed a clean version of their political anthem ‘FTD’ with its “fuck Donald Trump” hook reworked as “no Donald Trump.”

The song, which lays bare both rappers’ feelings about the Republican presidential nominee, is taken from YG’s latest album, Still Brazy, and has caused issues for the Compton rapper.

In April, following a video shoot for the track, YG told TMZ that the Secret Service had contacted his label and asked to see the lyrics for the upcoming album. “If I talk about him on my album, they’re gonna try to take it off the shelf,” YG claimed at the time. The video shoot itself, featuring people responding to an open call by YG to join, was shut down by the LAPD who apparently didn’t know what it was and had investigated following calls of people gathering and cars roaming.

First they pulled out tasers, then pistols, then SHOTGUNS. Not sure any of that was necessary, but my nigga @nipseyhussle executed like a professional. Hands up. We was all in a peaceful FUCK DONALD TRUMP mood. No rioting, no fighting, we were together. I guess expressing political views with togetherness requires police to pull out shotguns.

Earlier this week, YG unveiled an ‘FDT’ remix featuring Macklemore and G-Eazy with the opening line, “How do you make this far / How the fuck did it begin? / A Donald Trump rally sounds like Hitler in Berlin.”

Read Next: YG steps up his rap game and steps out of the shadow of DJ Mustard on the ferocious Still Brazy 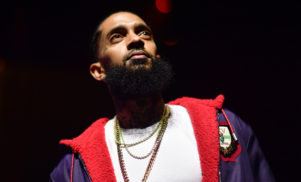