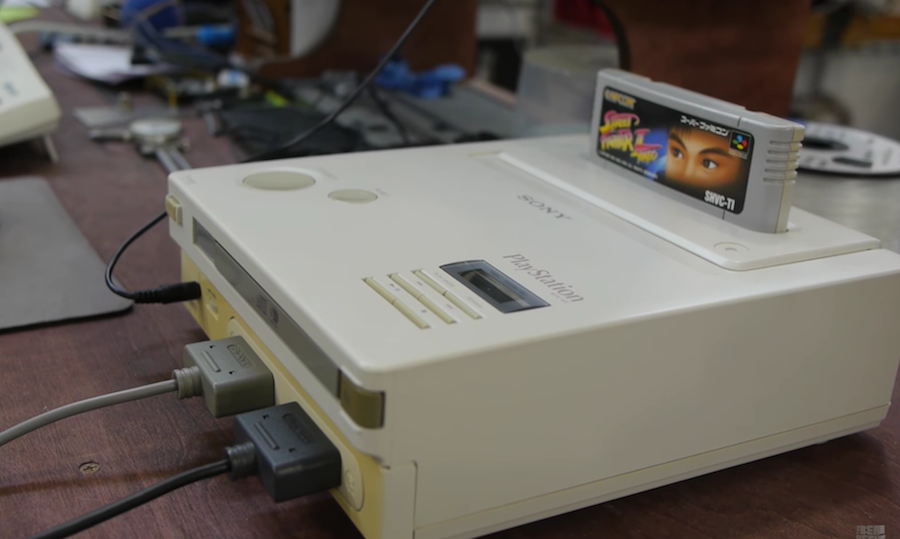 The abandoned collaborative console is the rarest in game history.

Last year, the only known prototype of the Nintendo Playstation Super Disc was found in a box of junk acquired at auction for just $75. Now, thanks to tech guru Ben Heck the world’s rarest games console has finally been restored to working order. If you’re confused as to what a Nintendo Playstation is, join us for a bizarre history lesson.

In days of the Super Nintendo (better known as SNES), Nintendo planned to make its shift to CDs by partnering with Sony. The Super Disc was the result of their collaboration, however the deal fell through before it could be finished. Nintendo then briefly partnered with Philips, who offered nothing, but managed to take advantage of the deal by using closely-guarded Nintendo IPs for their abysmal console, the CD-i (that’s where those terrible Zelda cartoons came from). They eventually cancelled the project altogether, and shifted focus to the N64; Sony, meanwhile, had other plans.

The seeds had been sown and Sony began to work on their own gaming platform (codenamed PSX), which a few years later emerged as the world-beating Playstation. It arrived just in time to spark the next great console war with the N64. The legend persisted, though, that the two consoles were born from the same failed experiment.

When the prototype Nintendo Playstation console was discovered, it predictably had trouble working. The cartridge slot worked, but the sound was broken and the CD drive completely unresponsive. Now, owners Terry and Dan Diebold, have allowed Heck to break apart the console on his YouTube show and repair it to working order. Unfortunately, we don’t get to see the console’s CD capabilities as no games (that we know of) were ever developed for it – they just end up playing the SNES Street Fighter). Still, it’s a fascinating look inside a console that has often been dismissed as urban legend.

Watch the full restoration process in the pair of videos below