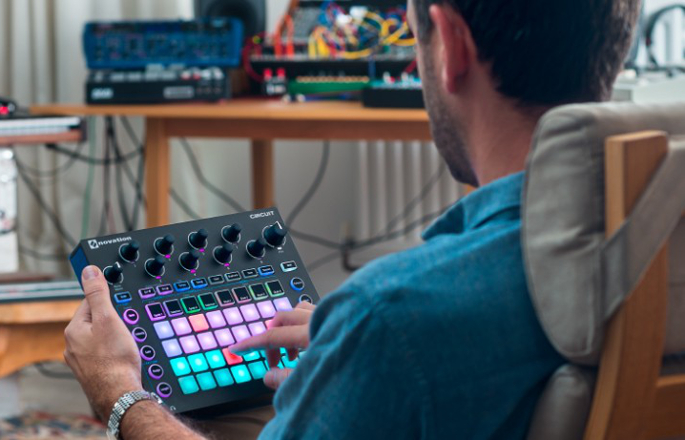 No longer will you have to make do with two drum sounds in a pattern.

Novation has updated its tiny Circuit groovebox with a host of new features, primarily the ability to play multiple samples on a single drum track.

Featuring two drum tracks and two synths inside a hardware box with a built-in step sequencer, Circuit has found popularity both with amateur producers and experienced professionals who want something portable to sketch beats on.

Version 1.3 of the Circuit firmware expands of its functionality, adding what Novation is calling “sample flip”. Previously the Circuit’s two drum tracks could only have one sound loaded, but now you can add a different sample to each step of your sequence.

Another sample-based feature added is the ability to preview samples without having to program them into a pattern first. It also lets you play along to existing drum tracks live, similar to an MPC. For those disappointed at the Circuit’s short sample length, the hardware also now lets you play an entire 60-second sample.

Novation’s Circuit Librarian companion software now allows you to change the colour of the LEDs on the hardware that represent different sessions, meaning you can colour code by genre. The Circuit Components software has been updated to make grouping samples on the pads easier too.

Full details of version 1.3 of the Circuit hardware can be found at the Novation website.

Read next: Novation Circuit: The groovebox that lets you make a track in minutes