30 anti-Donald Trump songs to be released in next 30 days from Death Cab For Cutie, REM, clipping and more

My Morning Jacket and Aimee Mann also part of campaign to discredit the Republican candidate through music.

A new series of anti-Donald Trump songs called 30 Days, 30 Songs featuring REM, clipping, Death Cab For Cutie and more is to roll out over the next 30 days in the run-up to the US presidential election on November 8. Listen to the first track, Death Cab’s ‘Million Dollar Loan’ below.

Organised by author David Eggers, all proceeds from 30 Days, 30 Songs sales will go to the Center for Popular Democracy and their efforts toward Universal Voter Registration in America. Eggers started the project after attending a Trump rally in Sacramento for The Guardian: “While the audience was waiting for Trump to appear, I was pretty surprised to hear music by Bruce Springsteen, Elton John and Queen,” Eggers explains. “None of these musicians support Trump, of course, so it occurred to me that this election would benefit from the timely resurrection of the political protest song.” 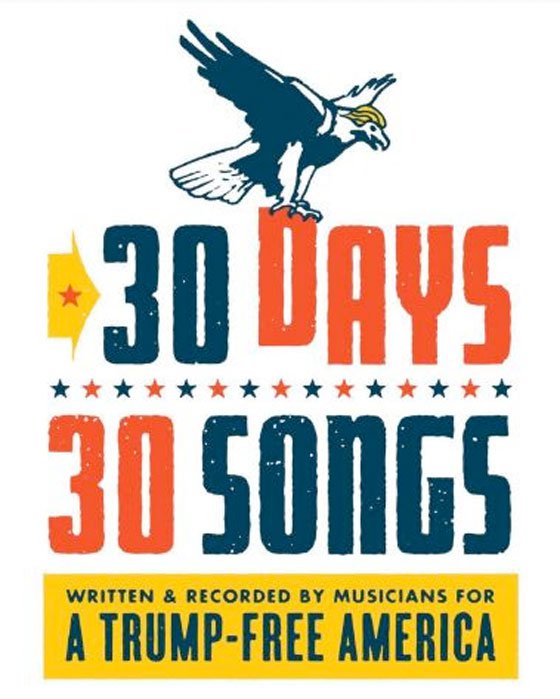 Death Cab For Cutie’s Ben Gibbard said in a statement about their track: “Lyrically, ‘Million Dollar Loan’ deals with a particularly tone deaf moment in Donald Trump’s ascent to the Republican nomination. While campaigning in New Hampshire last year, he attempted to cast himself as a self-made man by claiming he built his fortune with just a ‘small loan of a million dollars’ from his father. Not only has this statement been proven to be wildly untrue, he was so flippant about it. It truly disgusted me. Donald Trump has repeatedly demonstrated that he is unworthy of the honour and responsibility of being President of the United States of America, and in no way, shape or form represents what this country truly stands for. He is beneath us.”