This expressive MIDI keyboard can produce sounds like a stringed instrument

The K-Board Pro 4 can register different dimensions of touch and pressure.

Keith McMillen Instruments has launched a Kickstarter campaign for a new expressive MIDI keyboard capable of sensing different dimensions of touch and pressure.

The K-Board Pro 4 looks like a traditional MIDI keyboard controller, but registers how hard a key is pressed, how quickly a key is released and the finger’s horizontal and vertical position on the key, allowing artists to play it more like a stringed instrument.

As well as MIDI, the keyboard also uses a technology called MPE that sends more complex data than the 33-year-old MIDI standard, which sends information on notes played, pitch, pressure and other basic variables. 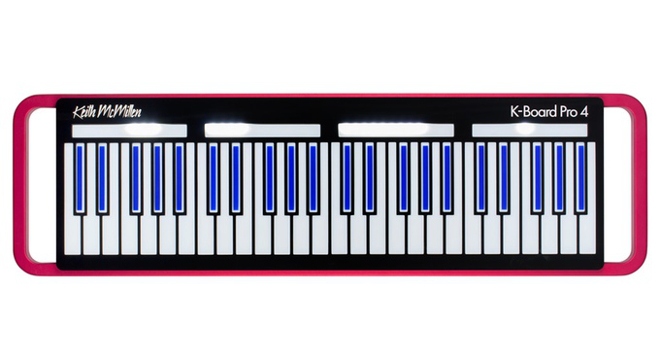 While it features unusual technology under the hood, it looks very much like a standard four-octave MIDI keyboard. However, it uses the company’s “Smart Sensor Fabric” technology for added durability, dispensing with moving parts and making the keys from silicone.

Keith McMillen Instruments is looking to reach a goal of $50,000 on Kickstarter, and is offering backers the chance to pick up the keyboard for $400 if they’re quick enough. The full price is $599.

This isn’t the company’s first Kickstarter: it recently funded the BopPad drum pad through the platform, and it has almost a decade of experience in making unusual instruments and MIDI controllers.

The new instrument is one of several new instruments to adopt MPE and offer greater expressive control in recent years, including the ROLI Seaboard Rise and Roger Linn’s Linnstrument.