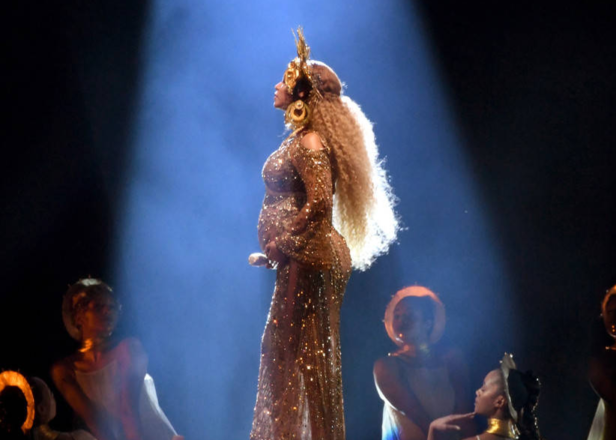 The singer’s long-time designer opens up about her show-stopping Grammys look.

Beyoncé may not have taken home as many Grammys as her fans (including Adele) believe she deserved, but her ‘Love Drought’ performance will remain one of the night’s most unforgettable moments. Part of that is due to the elaborate gold dress she wore on stage.

Designer Peter Dundas – who has worked with Bey on costumes for her Mrs. Cater and Formation tours, her dress for Barack Obama’s 2013 Presidential Inauguration and many much more – revealed to Vogue that creating the look was a very hands-on affair. It took a week to embroider the dress “with 50 people working on it constantly.”

Dundas says the dress was inspired by Gustav Klimt, Art Deco motifs and the African goddess Oshun. “I like creating stories within a garment,” he told Vogue. “It was a fun way to celebrate the moment for her.”

That moment, of course, also includes her pregnancy. Dundas also addressed the difficulties of creating a garment for someone who is expecting: “It’s particular mainly because her measurements were constantly changing, and also keeping it a secret from my collaborators became increasingly challenging as she grew.”