Since it launched in 2014, Bitwig Studio has gained a small but dedicated following in a market dominated by software like Ableton Live and Logic. Can its second version appeal to wider audience? Scott Wilson tests the upstart DAW’s new features and discovers that its largest audience could be gear obsessives.

When it comes to making music on a computer, people tend to stick with what they know. Whether you use Ableton Live, FL Studio or just Apple’s humble GarageBand, it’s often easier to carry on using the same software than learn a completely new method, especially when a digital audio workstation (DAW) can take months, if not years to master. I first started using Ableton Live 10 years ago, and I still find features I didn’t know existed, because once you get stuck in a way of doing things, it’s very difficult to change your habits.

This is one reason why relative newcomer Bitwig has a hard task ahead of it. Bitwig Studio is, functionally and aesthetically, a lot like Ableton Live – partially because key members of the team used to work for Ableton. Since launching in 2014, it’s taken a slightly different approach to other DAWs, offering features such as touchscreen support, the ability to add modulation plug-ins into its instruments and effects and support for expressive MIDI controllers such as ROLI’s Seaboard. On paper it’s the most advanced DAW in the world, but that only makes the thought of switching even more daunting.

However, it’s easy to get too stuck into your comfort zone. I never tried Bitwig Studio’s first version, but the launch of version 2.0 seemed like the ideal opportunity to finally give it a go, especially given the additional features the company has added, including complex MIDI effects for generating and transforming musical notes and plug-ins that send signals to analog gear such as Eurorack modular synths. It’s surpassed my expectations in a lot of ways, but it’s also a complex beast that won’t be for everyone. 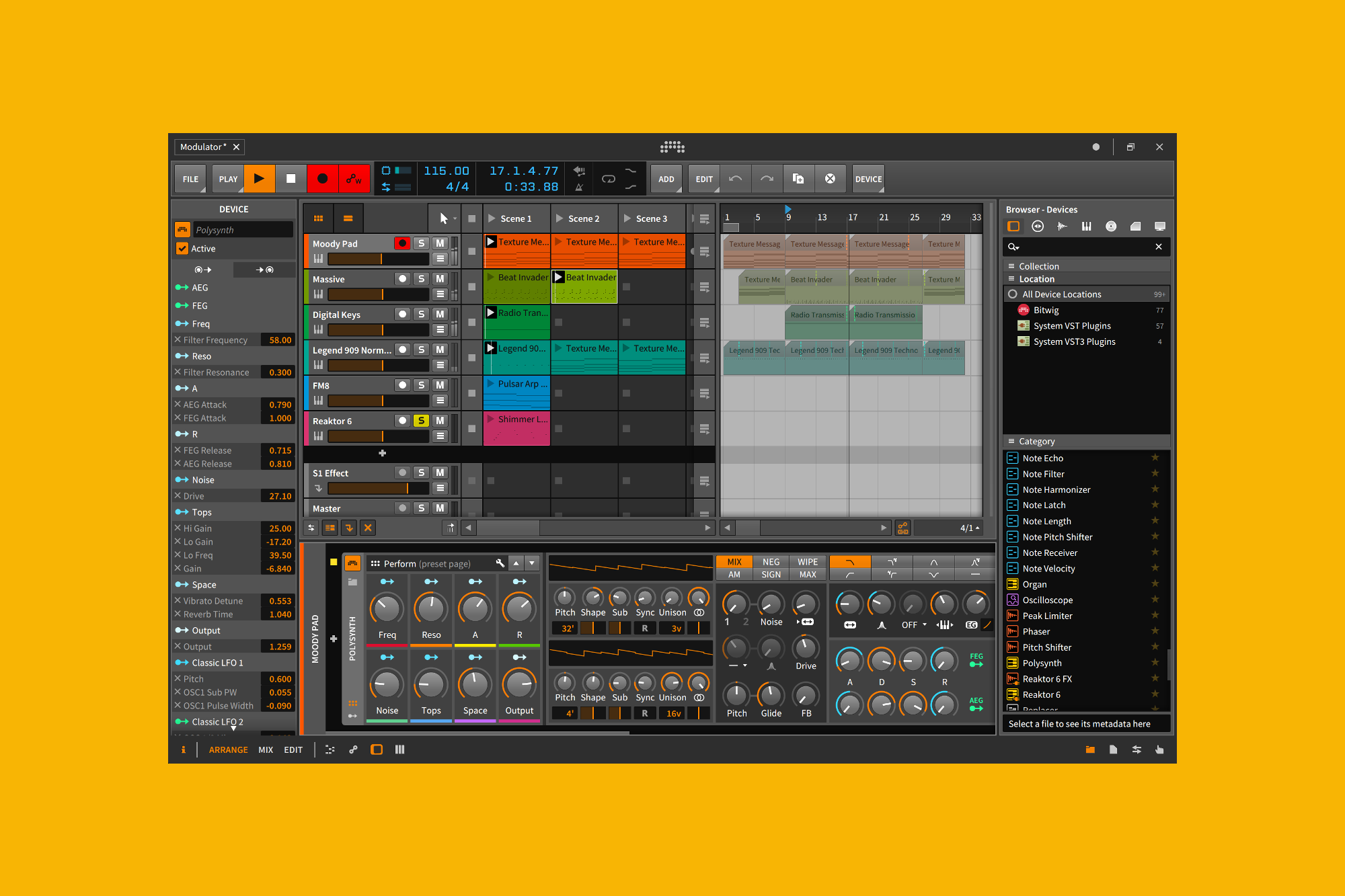 In terms of layout and navigation, Bitwig Studio 2 looks and feels like a hybrid of Live and Maschine

Aesthetically, Bitwig Studio 2 is way ahead of the competition. Even if you’re using a laptop with a tiny screen and like to have the file browser open at all times, you’ll never feel like you’re squinting to understand what your instruments and plug-in effects are doing – something that’s a regular problem using Ableton Live on my 13-inch MacBook Pro screen. The increased size of everything means you’ll have to do a lot of scrolling to tweak everything, but it’s a worthwhile tradeoff, especially on a Retina screen where everything just pops.

In terms of layout and navigation, Bitwig Studio looks and feels like a hybrid of Live and NI’s Maschine software. As with Live, hitting the tab key switches between a mixer-styler view that allows you to preview individual clips or entire scenes, and an arrangement view, where you can arrange sounds on a timeline. However, the latter differs from Live in that it can split the window into two sections: a Maschine-style clip launcher and a Logic-style timeline. It gives you four primary layouts for composition and improvisation; it takes some getting used to, but it’s incredibly versatile once you get your head around it.

There’s also a third tab, edit, which zooms right in on the particular clip you’re working with. Again, it makes life for those with small screens much more pleasant, even with everything around it. Finally, there’s the new dashboard, which is a hub for downloading updates, changing preferences, adjusting audio settings and getting help. It also displays your projects and templates in one easy place, making it much quicker to get back to what you were last working on. It’s not a huge feature, but it just makes everything much smoother than the competition. Producers spend more time looking at their DAW than anything else, but you won’t mind staring at Bitwig Studio 2 for hours. 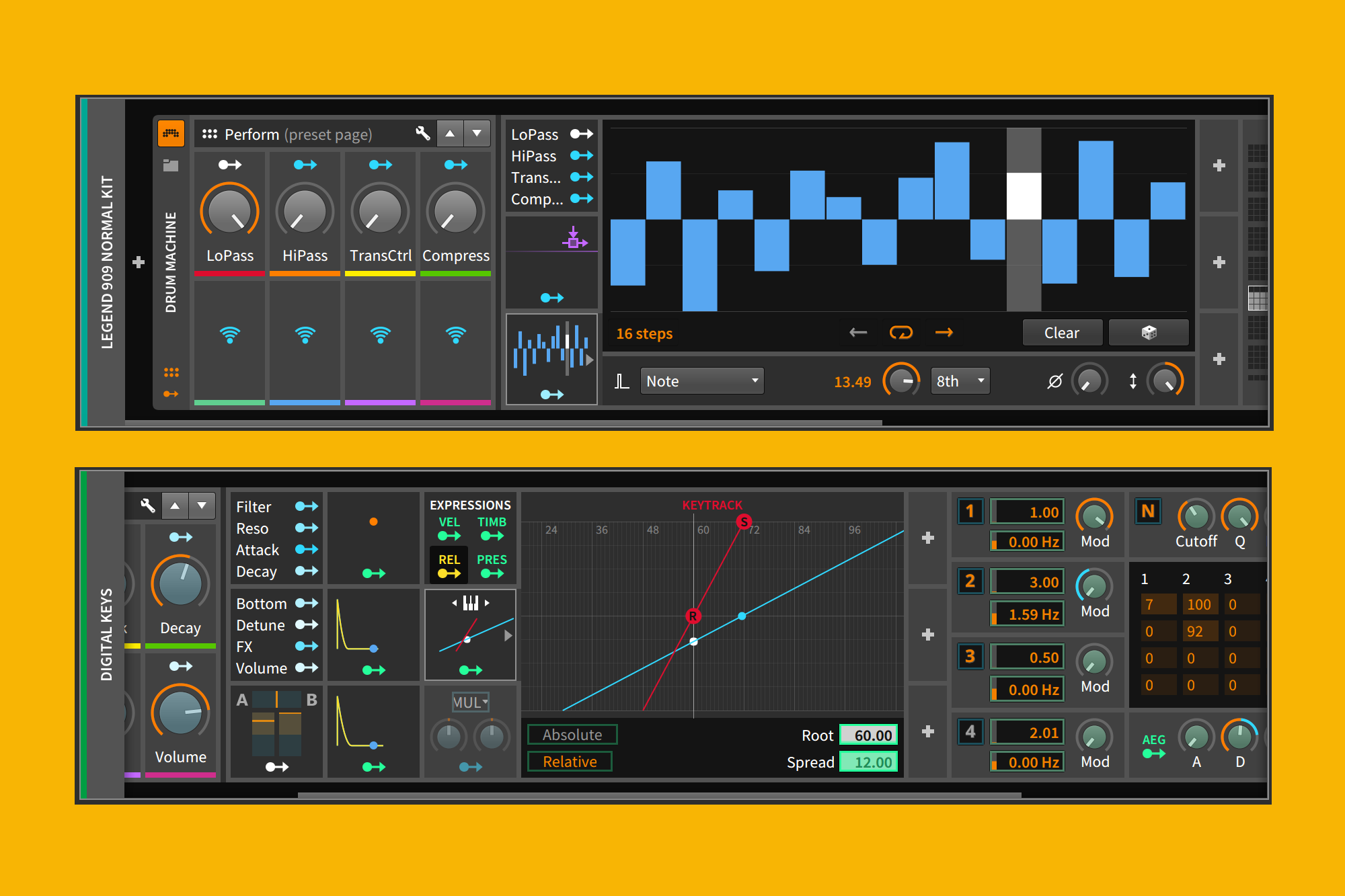 Bitwig Studio’s marquee feature is its modulation system. This has been a key part of the software since the first version, but it’s been fully overhauled in Bitwig Studio 2, offering the kind of expandability you can get with a modular synthesizer. It doesn’t offer the same kind of labyrinthine instrument-building options as software such as Max or Reaktor, but it is much easier to grasp, giving you over 25 different plug-and-play modulators that snap inside Bitwig’s bundled instruments and effects like standard VST plug-ins.

Each instrument and effect is equipped with modulator slots, accessed via a tab in the bottom corner of each device. Once this is toggled, you can add devices such as an audio sidechain or LFO for applying a bit of wobble to everything. These can be assigned to functions like pitch, pan, sustain – anything that glows blue for monophonic modulation or green for polyphonic. So, for example, if you want to turn a simple chord from Bitwig’s polysynth into a wild sequence-generating machine like Roland’s classic System-100m, you can plug in an LFO, select the sample and hold option and connect it to the oscillator’s sync and unison. I had more fun in five minutes with this than I’ve ever had with Ableton’s Operator synth.

Crucially, it’s possible to use these modulators with third-party plug-ins. So, load up NI’s Massive for example, and you’ll be given six slots you can use with Bitwig’s modulators. The integration is nowhere near as deep as with Bitwig’s own instruments, but it’s still a very cool feature that can get more mileage out of your soft synths, even if you think you’ve rinsed everything you can out of them. It’s not a full modular environment, but what Bitwig offers in its modulation system is much more likely to appeal to the middle ground of users who want simplicity and ease of use, not a complex Reaktor-style framework. 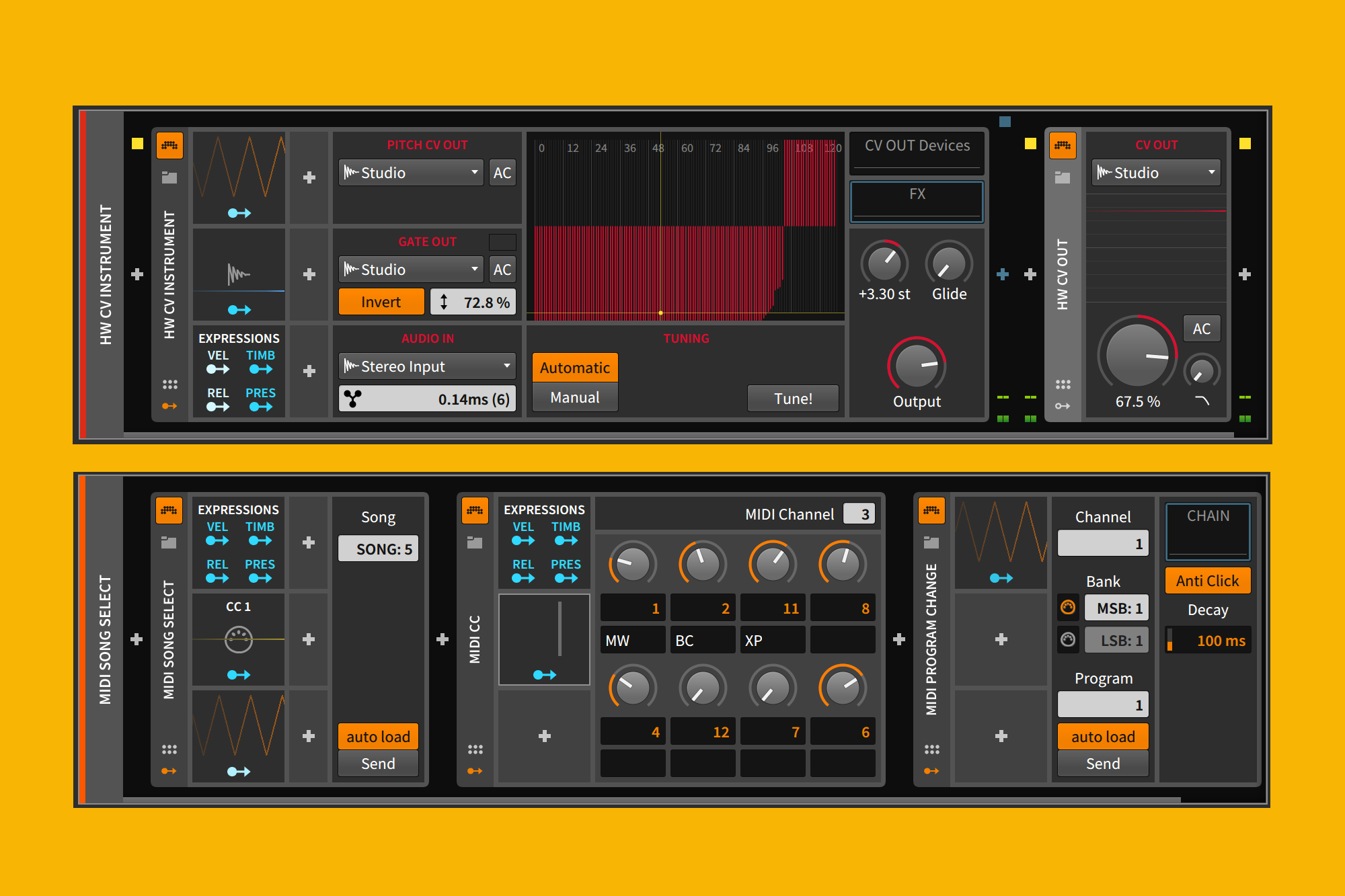 Bitwig’s CC and MIDI devices make your laptop a useful tool, even if you like to play all-hardware sets

Another big feature for Bitwig Studio 2 is its hardware support, specifically the ability to control analog gear via CV (control voltage). This can be done in other DAWs, but not without a third-party plug-in such as Silent Way, or sending a CV pulse over an audio track. Bitwig doesn’t just build this function right into the software, it offers three specific devices: clock output, simple CV signal output and a CV instrument, which sends note data as CV. These all work as advertised, but you’ll need a DC-coupled audio interface to get it to work.

Another improvement is in MIDI. Bitwig Studio’s first version was criticized for its dodgy MIDI sync, but version 2.0 seems to have improved it. It’s also added three specific MIDI devices: one that sends MIDI CC data to external hardware and plug-ins, one that controls MIDI program changes of hardware and plug-ins from Bitwig and, most usefully, a MIDI song select device that can be used to change patterns on a drum machine. It makes your laptop a useful task automator, even if you’re the kind of producer that enjoys all-hardware sets.

However, it’s in combination with the modulators that Bitwig’s new hardware powers really shine. You can plug all of Bitwig Studio 2’s modulators into these MIDI and CV devices, enabling you to get far more out of your gear, turning the Korg Volca that’s been gathering dust into something much more exciting. More than any other software I’ve used, Bitwig Studio 2 proves that software and hardware shouldn’t need to be two mutually exclusive approaches. 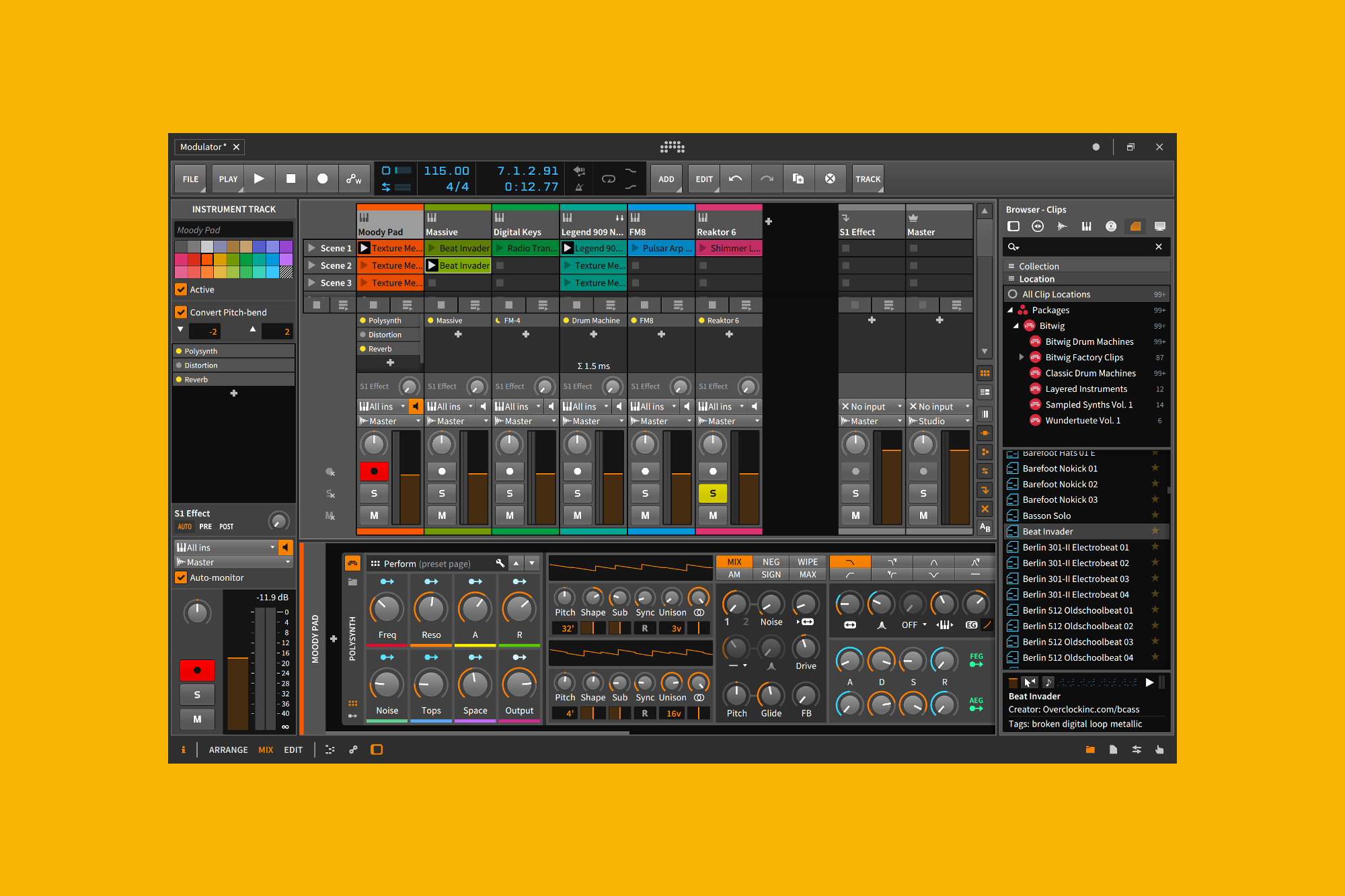 Bitwig Studio 2 has inspired me to do new things in a way I haven’t done with a DAW for a long time.

There’s a lot going on in Bitwig Studio 2, which is a double-edged sword. While it’ll scratch the itch that veteran producers might have for new tools, the sheer depth of what Bitwig Studio 2 has to offer will almost certainly perplex novice producers. The interface is beautiful, but the amount of information on display may overwhelm anyone who just wants to make a simple beat. This is where Ableton Live, with its plug and play accessibility for beginners. (specifically using the fantastic Push controller), still excels.

However,if you’ve been using Live for a few years and want a new challenge, or something that’ll offer more possibilities with a modular synth or even just your inexpensive Korg Volca synths, Bitwig Studio 2 has the upper hand. Bitwig’s focus on hardware integration makes it a DAW for 2017, ready to control all the devices a lot of us are currently obsessed with collecting.

Most of all, Bitwig Studio 2 has inspired me to do new things in a way I haven’t done with a DAW for a long time. It’s certainly not a replacement for Ableton Live, FL Studio or Logic, but it seems to have found its niche: inquisitive musicians who like to tinker under the hood to expand their sound in unusual ways.