Elektron Digitakt review: A classic drum machine in the making

Elektron has built an impressive legacy off the back of drum machines and synths like the Machinedrum and Analog Four, but its gear has often been priced out of the reach of most amateur musicians. However, its latest drum machine claims to offer a high-end experience for a more affordable price. Does the Digitakt live up to its promise? Scott Wilson reviews the Swedish company’s exciting new instrument.

Elektron gear is a lot of things: desirable, dependable and great-sounding, yes, but affordable? Not really. Though the Swedish company arguably kept the spirit of the drum machine alive during the 2000s with the Machinedrum, Roland and Korg have stolen a lot of its thunder more recently with affordable drum machines such as the Volca Beats and AIRA TR-8. Elektron’s response to those is the Digitakt, a compact digital drum machine that’s priced to compete with its new rivals.

At $679 (£659) though, the Digitakt isn’t exactly cheap. That’s well above what most people would consider paying for an entry-level drum machine, and $200 more than Arturia’s analog DrumBrute. However, the feature set is seriously impressive for the money. It can play eight audio tracks, you can upload your own samples, and it’ll even function as a MIDI sequencer for up to eight pieces of gear at once.

But Elektron already has a drum machine in its range, the $1,248 Analog Rytm. And if you want to sequence your gear, you can do that with the Octatrack, a favorite of live electronic acts like Surgeon, The Haxan Cloak and Demdike Stare. So where does the Elektron fit in? Does its digital sampling engine skimp on sound quality? Is it just a cut-price Octatrack for amateurs? The answer is a resounding no. In fact, the quality is so high that’s hard to believe Elektron is making a profit on it. 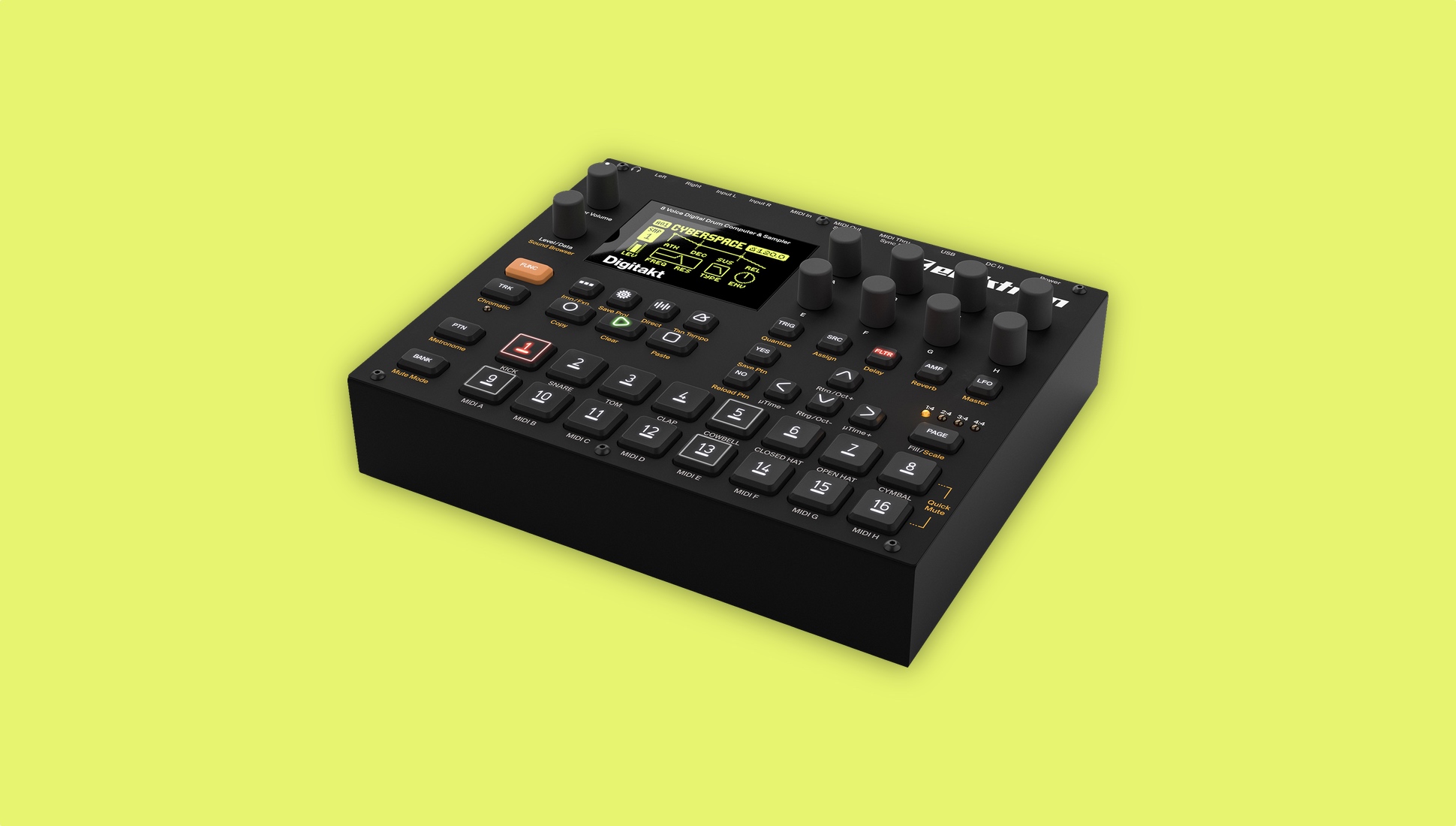 This quality is obvious as soon as you take the Digitakt out of the box. Images don’t do justice to the brushed matte black finish or the glow of the LEDs through the symbols on the buttons; the color palette isn’t a million miles away from that of Roland’s AIRA TR-8, but where that blinds you with a mind-boggling array of flashing lights, the Digitakt’s effect is more subtle. The OLED screen is small, but clear enough that using it for long periods is a joy.

The buttons themselves seem to have been modeled on a classic computer keyboard, but their clicky feel is oddly satisfying to use. Once you’ve developed the muscle memory and everything falls into place, using the Digitakt actually feels a lot like typing: it’s quick and intuitive, even though you’ll be flicking through screens quite often. The main issue for some will be that they lack the sensitivity of the Analog Rytm, so you’ll have to dial the velocity in manually with a knob.

The knobs themselves are equally luxurious, but their sensitivity feels a little off at times. On some functions, like tweaking a filter envelope, it’s precise. When you just want to select a drum sound though, hitting the sweet spot is more difficult, and you feel like you’re trying to crack a safe just to load a kick drum. On the whole though, they’re perfect, if a little loose.

Another potential sticking point for some users will be the lack of individual audio outputs on the rear. The Digitakt is only equipped with a stereo audio output, but will stream the eight internal tracks to your DAW over USB if you have Overbridge installed (unfortunately Overbridge for Digitakt wasn’t ready at time of review). Thankfully however, the internal mixer is so precise and the sound engine so sharp that this hardly matters. 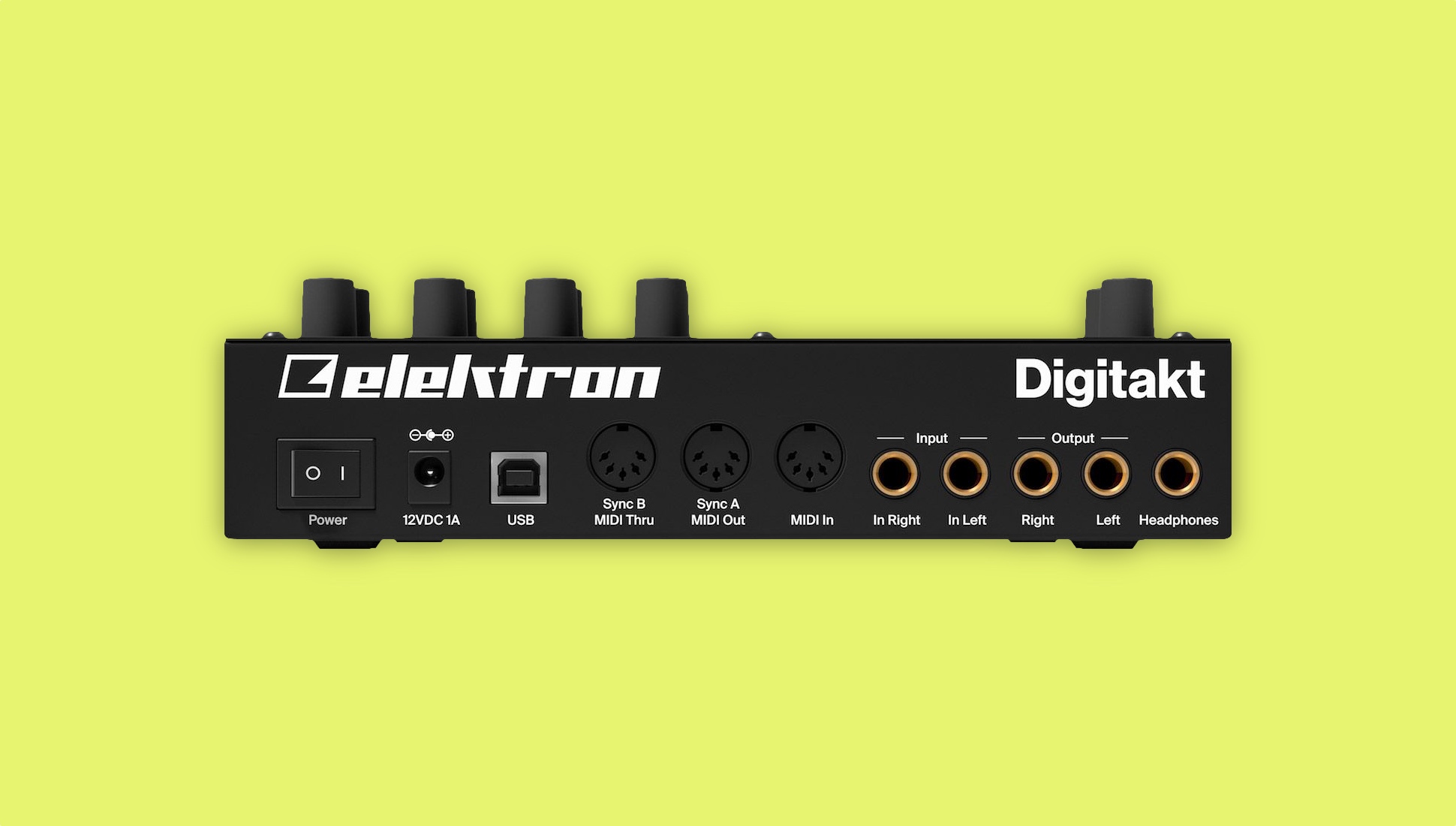 Some people might be wary of paying $679 for a drum machine that doesn’t have analog sound, but not only is sound quality not an issue, the Digitakt makes a nonsense of the idea that an analog drum machine is better in any way. The loops you can create with the Digitakt (of which you get several pre-loaded) sound more like polished tracks than simple drum loops, something partially achieved by the instrument’s sampling ability.

Each drum sound comes from a short sample, which can be cut, tuned, filtered and looped however you like, with separate pages for modifying the amplitude envelope and changing LFO parameters. Beyond all this, you can add overdrive to each drum for added bite, as well as delay and reverb per instrument. In conjunction with the chromatic mode, you can even write melodies.

So, if you want a TR-808 kick, you can import a sample no problem. However, where the Digitakt really comes alive is when you dive deep into the menus and start messing around with samples to make your own drum kits, making it an ideal tool for people who are averse to retro drum sounds or want to get more experimental. This is possible on Ableton Live or Maschine too, but the Digitakt feels better set up for spontaneity, whether you make razor-sharp techno rhythms or dusty hip-hop.

Digitakt’s sequencer is also deep, but it’s far from complex. I had expected Elektron to use the screen for sequencing as well, but it’s done purely by hitting the record button, switching to the track you want to use and triggering the keys. If you want to extend the loop beyond four bars, you can increase the length and choose which part of the loop you’re working with by hitting the page button.

In some ways the Digitakt offers a decidedly old school experience, but Elektron fans will be pleased to hear that it’s got just as many advanced features squirrelled away as the Analog Rytm and Octatrack. First, there’s the parameter lock function. This allows each “trig” button (Elektron’s term for a note in the sequence) to have their own unique values. So, by holding down the trig and using the eight knobs, you can easily tune your kick drums to different notes, add delay to just one hi-hat or pan your snare drums individually. In short, it offers a lot of control.

The other key feature that may not be familiar to Elektron newcomers is the conditional trig feature. This is basically a function that allows you to create variation easily depending on what variables are set. One mode allows you to create drum fills that will only activate when a button is pressed. Another is a randomizer, which allows you to set the probability of a note being triggered. They’re capable of creating very complex patterns with the minimum of effort.

Also fun is the Digitakt’s retrig function. When activated, these will cause the note to repeat at whatever rate and length you want to set, which is a good way of either adding quick and easy variation to a pattern or creating precise, glitchy snare rolls. There’s also a micro-timing function, which is a great way of moving drums off the grid and making your rhythms sound a little more natural. 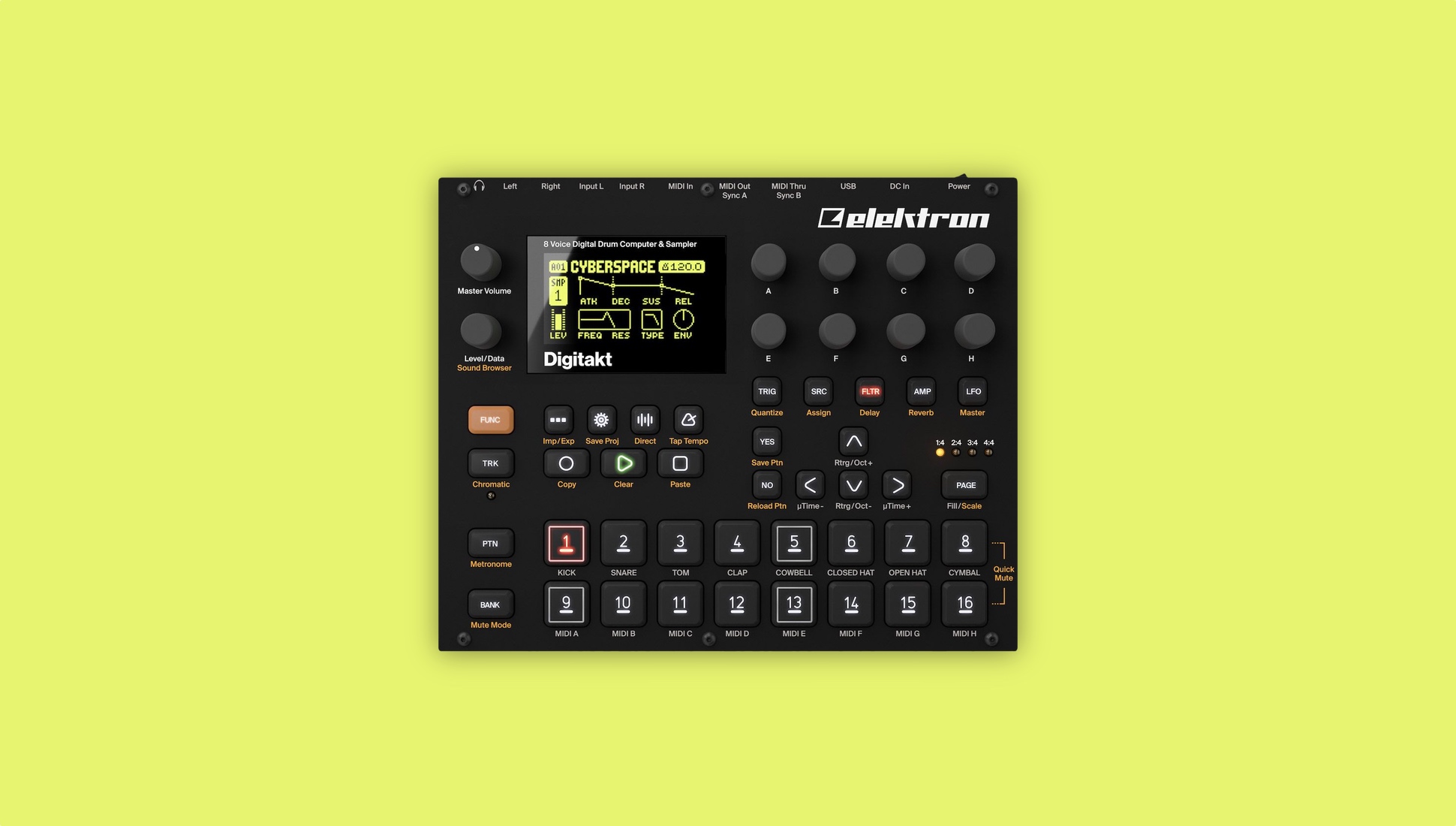 One of the most surprising functions of the Digitakt is its ability to sequence external gear. It’s got eight MIDI tracks, each with up to four notes of polyphony, allowing you to send melodies and chords to eight synths. It’s definitely not an entry-level sequencer: setting everything up will take some time and basic knowledge of how MIDI channels work, and there’s none of the automatic scale modes found on Ableton Push or Maschine hardware, but it’s a useful feature that’s likely to ensure the Digitakt will find its way into the live rigs of lots of live performers.

However, using the MIDI sequencer makes you acutely aware of the one thing missing from the Digitakt: a song mode. The Octatrack and Analog Rytm both allow you to link patterns and store them in memory, giving you something like Ableton Live in a box. The Digitakt on the other hand, just has chain mode. This allows you to chain patterns within a single bank together to have them play in any order you want, but crucially, the chain will be lost if you switch banks or switch off the Digitakt.

This is likely to be the real deal-breaker for a lot of people considering whether to buy the Digitakt. If you’re hoping for a box that you can turn up to a gig with and use as a control hub like an Octatrack, you’re out of luck. However, if you want an instrument to make beats in the studio or improvise with on the fly, the Digitakt is one of the best drum machines available. If you want a decent workaround for the lack of song mode and you don’t mind a laptop being part of your setup, then you can of course use Ableton Live to send program change messages to trigger loops as well.

Overall, the lack of a song mode doesn’t detract from what’s an otherwise brilliant drum machine. It’s versatile, the interface is easy to get to grips with, it sounds great and you can sequence your synths with it. In the short time I’ve had with the Digitakt, it’s got me thinking far more creatively about how I build rhythms thanks to its on-board tools. $679 is still an amount you’ll have to think about parting with quite seriously, but you’re unlikely to feel shortchanged. If you’ve been tempted by Elektron gear before but put off by the price, this is the time to take the plunge – the Digitakt is a classic in the making.

Read next: Novation Peak review: A luxury synth at a reasonable price