Novation is renowned for making affordable, accessible tools for music-making. Its latest device however, is a luxurious polysynth that aims to take a chunk out of the high-end sphere dominated by companies like Moog and Dave Smith Instruments. Can Peak carve out its own space in a crowded market? Scott Wilson reviews the UK company’s exciting new synthesizer.

Novation has released a lot of instruments and controllers in its 25-year history, but none of them has been anything like Peak. The UK company, which is best known for its Launchpad controller, has a proven track record with synthesizers, but its new eight-voice desktop polysynth is a significant leap ahead in terms of technology and design from devices like the Ultranova. Novation has always created solid, dependable products at an affordable price, but Peak is the first instrument from the company you’d put in the luxury, high-end category.

Obviously, that jump in quality comes at a price. At $1,299 (£1,249), Peak is almost three times more expensive than the Ultranova. It’s also likely to be out of the reach of bedroom producers who may have started beatmaking with the Launchpad, which can be picked up for just $150. However, Peak is $700 less than DSI’s new Prophet Rev2 and $250 less than Moog’s Sub 37, which doesn’t even feature polyphony. On balance, Peak is actually something of a bargain compared to some of its rivals.

Given Peak’s relatively inexpensive price, you have to wonder: has Novation cut any corners to bring it to market? First impressions are that it hasn’t: Peak is exceptionally well made with a sound engine to match. While it’s an analog-digital hybrid, it sounds as good as any full analog synth and in some cases sounds better — if you’re prepared to spend some time getting to know how it works. 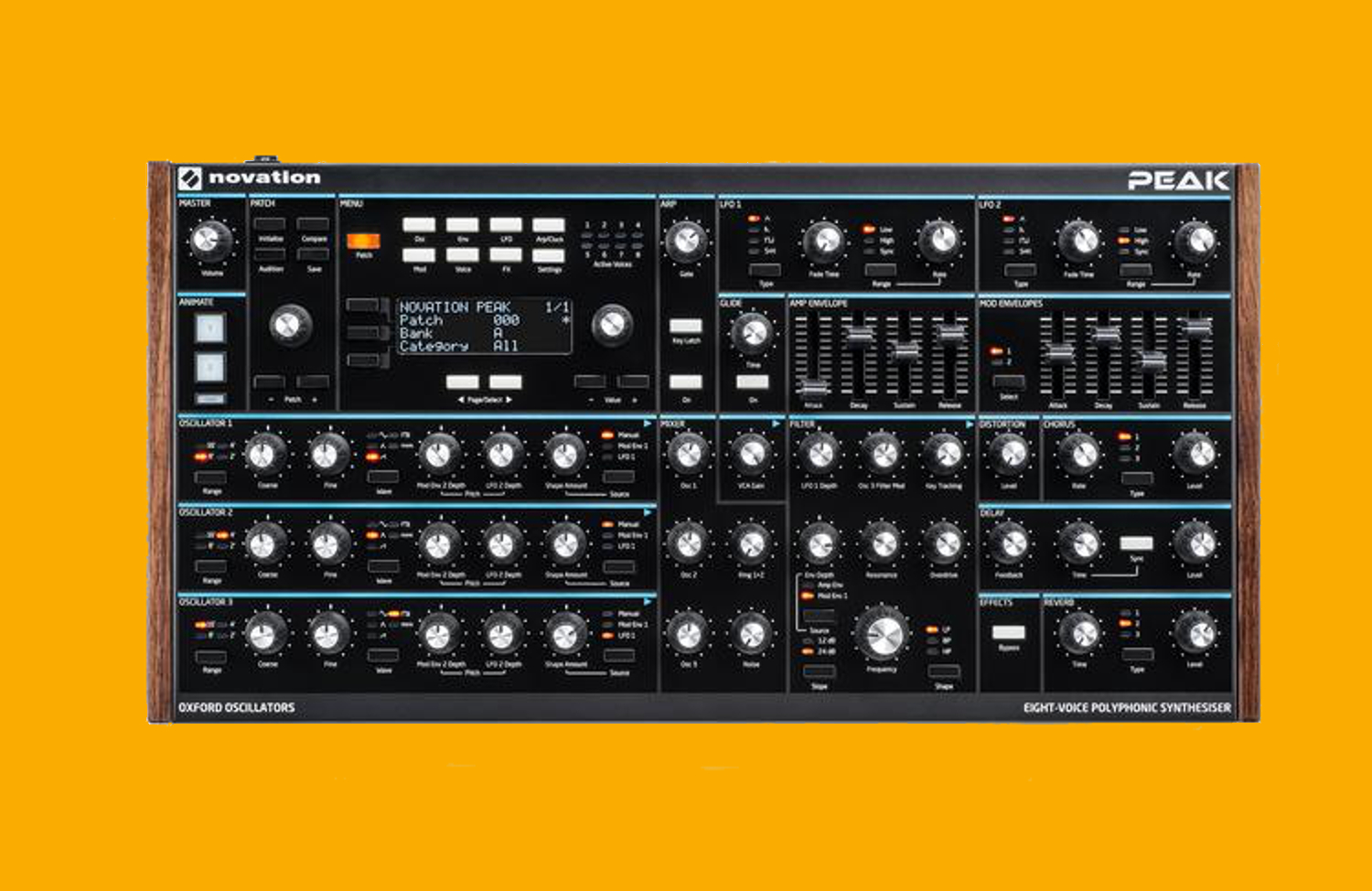 Peak doesn’t have a keyboard, but it’s not exactly lightweight, nor is it all that compact. It’s heavier and larger than the average laptop, so anyone hoping for a powerful desktop synth you can carry in a backpack to a gig will be out of luck. However, it’s exceptionally well made and reassuringly sturdy; the metal knobs and interface have the luxury feel of a high-end instrument, and the look is more like one of Dave Smith’s recent desktop synths, such as the Prophet-6. It’s a far cry from the brightly colored plastic of Novation’s earlier synths and controllers.

Novation’s instruments have always favored the hands-on approach, and Peak is no different: it features 42 control knobs for tweaking oscillator shape, effects, LFOs and more. While the layout is initially a little bewildering, each section is presented clearly, with the signal flow laid out in a logical way. There are sliders for controlling the amp envelope and the modulation envelope, as well as an OLED screen for browsing patches and modifying values that’s bright and clear enough that you’ll never be squinting at it.

On the rear, there’s enough connections to keep everyone happy: MIDI in, out and through, audio outputs for both the left and right channels, headphone jack and a CV modulation input for connecting to a modular system. Finally, there’s a USB port for transmitting MIDI data from a laptop, which Ableton Live recognized without any setup needed. 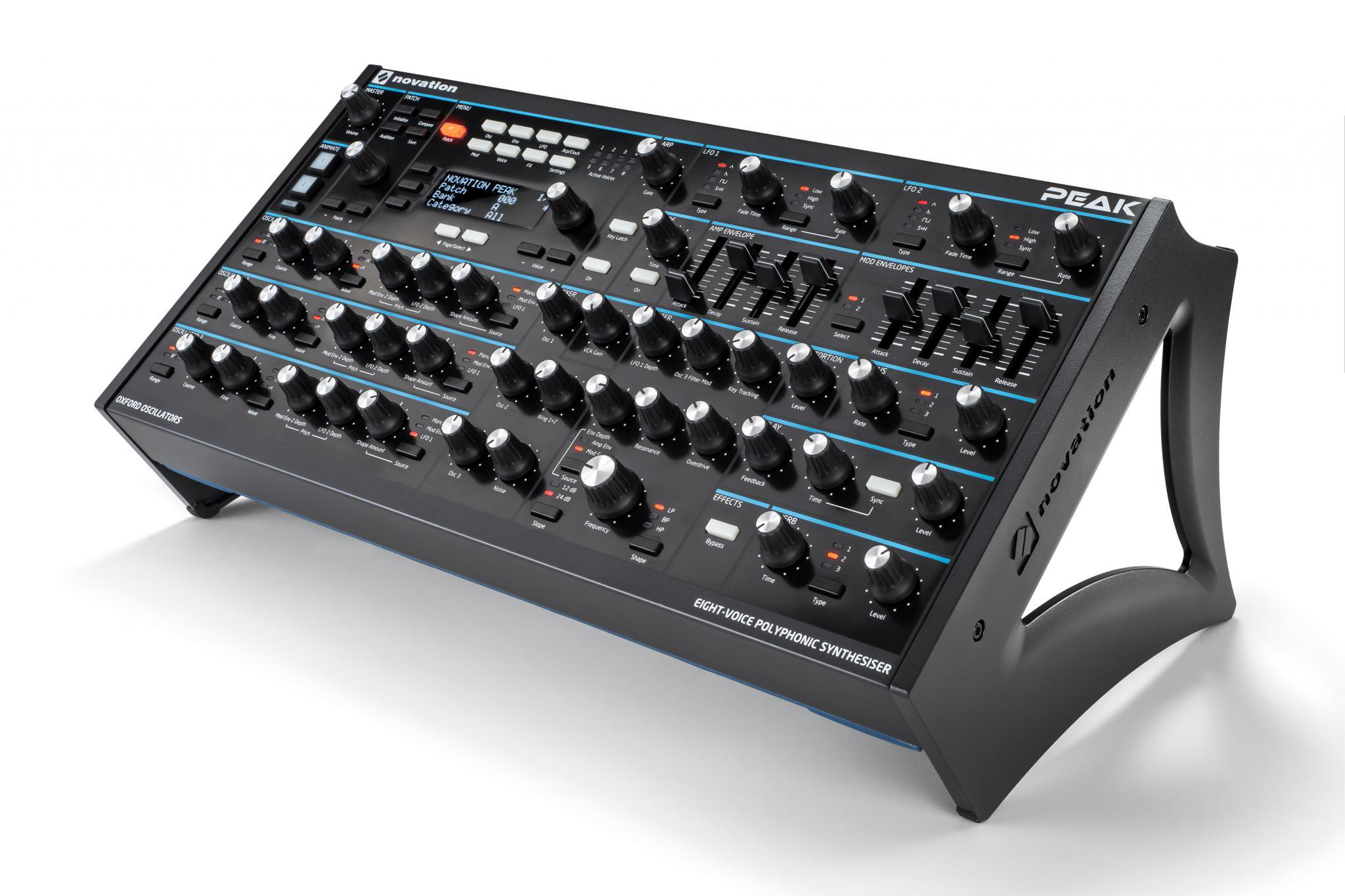 Peak looks and feels brilliant, but this doesn’t prepare you for how incredible it sounds. The synth isn’t full analog like some of its high-end rivals (and the slightly less expensive $999 DeepMind 12 from Behringer), but a hybrid with digital oscillators and analog filter. This helps keep costs down while making it capable of generating high-quality sound; according to Novation, this is because of a processor that runs at 512 times the speed of most digital-to-analog converter chips, which keeps its waveforms free from digital artefacts.

It’s difficult to argue with Novation’s claim. Pad sounds are lush and expansive, arpeggios are crisp and leads have just the right amount of bite to make you believe you’re listening to a fully analog synth. Even the bass patches sound like they’re coming from a vintage instrument, with all the full-bodied character and resonance to create everything from deep G-funk basslines to dark low-end for jungle and D&B tracks. In terms of sound design, it’s easily one of the most versatile hardware polysynths on the market right now.

A key reason for Peak’s versatility is the inclusion of 17 different wavetables. These can be used to add interesting harmonic structures to sounds, such as vocal effects, which can lead to some unusual and nuanced tones. Even if you just want to use Peak as a synth for emulating vintage sounds it’s more than up to the job, and it’s highly unlikely anyone will be able to tell the sound has come from anything other than a fully analog synth.

While Peak is more than capable of recreating convincing analog-style sounds, the synth’s killer app is its advanced modulation system. The front panel has plenty of options for adding some movement to your patches, but under the hood is a modulation matrix to go even deeper into the sound creation process. For example, you can map either of the synth’s two dedicated “animate” controls to things like LFO rate or pitch, allowing you to get wobbling leads or strange rising and falling effects just with a simple button press.

Using the matrix requires some menu browsing, but it’s not difficult to get the hang of. Owners of Eurorack modular systems might not be all that impressed, but for many musicians, being able to change the waveshape of an oscillator via a keyboard’s aftertouch will open up a lot of new possibilities in the studio.

Peak’s effects section is just as impressive as the modulation matrix. Onboard effects on less expensive synths can often feel like an afterthought, but on Peak the delay, chorus and reverb sections are things you’ll be using a lot to modify your sounds in different ways. For me though, it was the overdrive and distortion that really impressed. The latter especially added just the right amount of grit, allowing you to get satisfyingly crunchy yet subtle effects. Adding distortion to one of the synth’s percussion patches for example allowed me to get an almost granular sound.

It’s unlikely that anyone would have thought that the must-have synth of the year was going to come from Novation, but Peak is a very real contender for one of 2017’s best instruments. It’s digital, yes, but the sound design options it offers just can’t be had for the amount of money Novation is charging. It’s a bargain by any standard.

However, it’s definitely not a synthesizer for beginners. Add a good MIDI keyboard with aftertouch onto the $1,299 asking price, and you’re closer to the $2,000 of the DSI Prophet Rev2. If you’re one of the intermediate or advanced level producers Peak is aimed at though, you’ll probably already have the gear you need to get the most out of it. If you want to move on from soft synths and you’ve got the time and the patience to learn how to use it, Peak will make an awesome centerpiece to any studio.