Following the success of Novation’s Circuit groovebox, the UK company is back with Circuit Mono Station, a simple two-oscillator synth with built-in sequencer and plenty of hands-on controls. Scott Wilson finds out whether the new device has a place in an increasingly crowded market.

If you want a simple analog monosynth, you’re currently spoiled for choice. Not since the early ‘80s has there been such an array of portable, affordable boxes capable of making grunting basslines and twinkling sequences: there’s Moog’s Minitaur, Korg’s MS-20 mini, Roland’s new SE-02 and Dave Smith’s Mopho to name a few. In fact, there’s almost too many, which is probably why Novation’s new monosynth doesn’t look like anything else in the same category.

Circuit Mono Station is inspired by the sound engine of Novation’s popular Bass Station II synth and the design of its all-in-one Circuit groovebox. The look, at least, is likely to divide opinion; the Circuit Mono Station looks like Novation sawed the top off a Circuit and bolted a synth control panel on top. It’s not exactly elegant, but as anyone who’s used the original Circuit will be aware, it’s all about the the 32-pad matrix at the bottom, which is one of the most user-friendly sequencers ever designed. 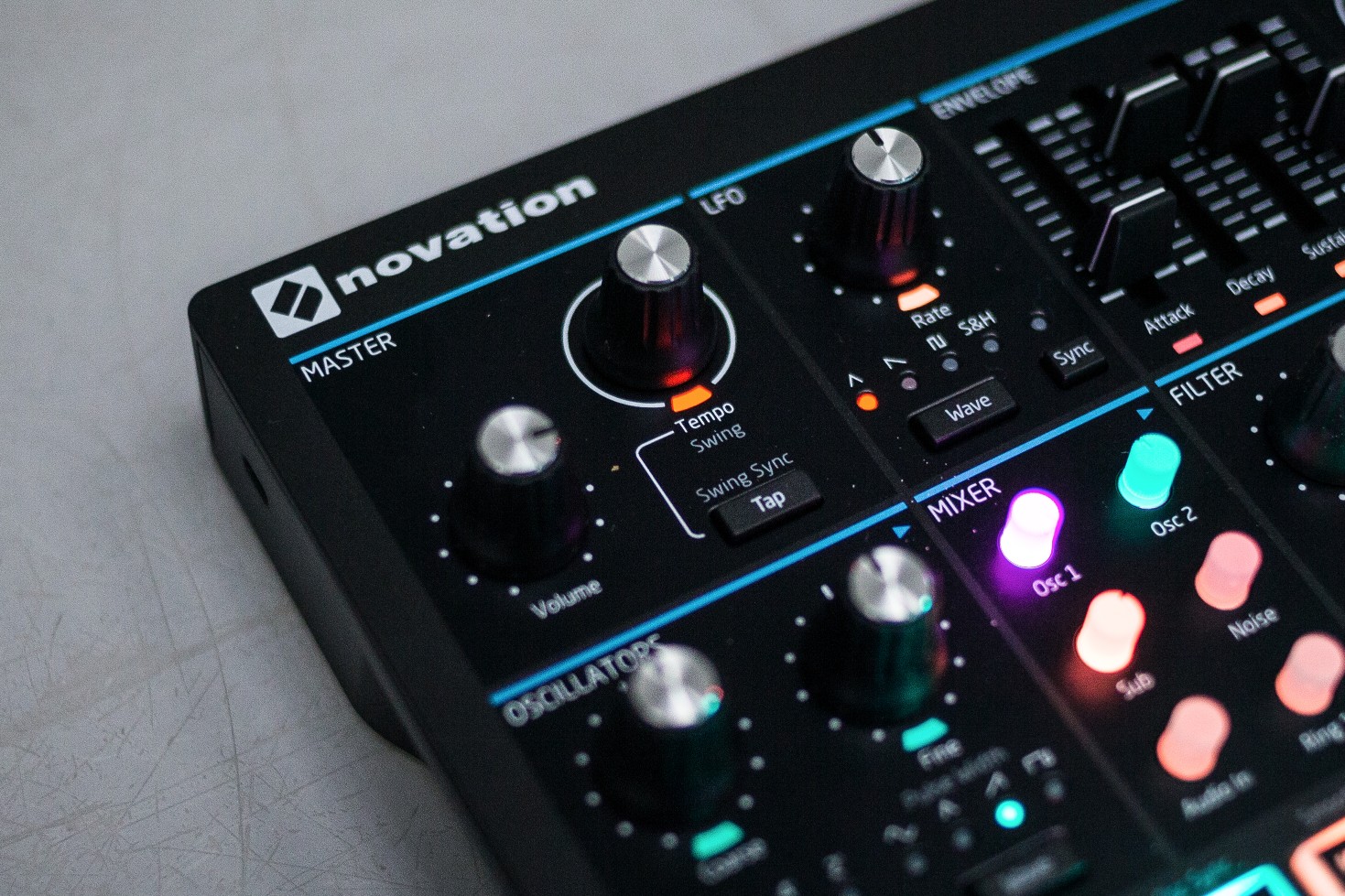 As you might expect, the Mono Station sounds a lot like the Bass Station II, with high-pass, low-pass and band-pass options in the filter and a sub-bass knob for deeper underlying bass tones. However, it leans towards the raw of the spectrum; separate overdrive and distortion sections give it the extra grit you need for more aggressive bass sounds. This also makes it ideal for crafting harsh, turbo-charged acid lines like a TB-303, though the Mono Station’s variety of waveforms means it’s more versatile than Roland’s iconic silver box.

However, the Mono Station is no ordinary mono synth: it’s actually paraphonic, which means both oscillators can be sequenced independently. Pitch, glide rate, gate length and pattern behavior of each oscillator can all be sequenced, giving you have an extra layer of sound to play with.

Paraphony isn’t like polyphony – changes you make to the filter section, envelope and LFO will be applied to the overall sound, but being able to tweak the pitch of each oscillator independently means you can make strange, detuned sequences. It takes some getting your head around, but the way the two oscillators work with the Mono Station’s sequencer is like having a bass and a lead synth line in one voice.

Novation has made a lot of the paraphonic feature in the Mono Station’s marketing, and while it’s more than a gimmick, a lot of users will probably find it less important than many of the synth’s other features, especially the modulation matrix in the top right hand corner. A lot of the time I just found myself focusing on what the sequencer could do with the single oscillator mode in conjunction with the modulation options. 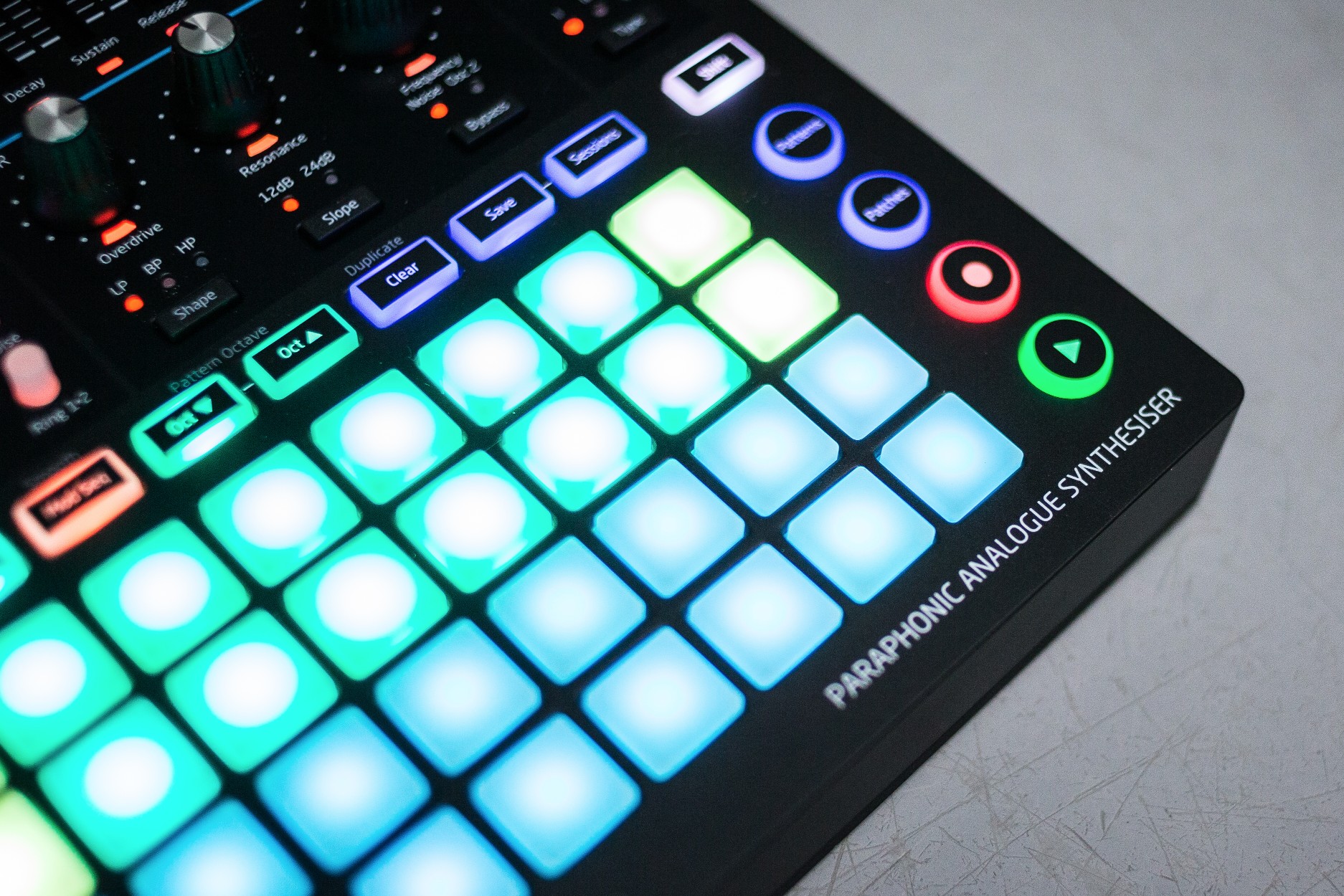 Anyone who already owns a Circuit will be pleased to know that nothing much has changed with the way the Mono Station handles sequencing in comparison to the original. You load a session to start a new idea, load a patch, choose the sequence length, then use the note view to sequence your notes. Sequencing a bassline or melody can be done just by hitting record and playing it, and it’s possible to automate synth parameters by holding record and tweaking the knobs.

While the sequencer has all the functions of the original Circuit, the Mono Station has plenty of new features that make it even more powerful. Additions such as a fractional gate mode, sync rates that can be increased and decreased with each new bar and the ability to run your pattern forwards, backwards or even in a random order make it akin to some of the quirkier Eurorack sequencers on the market.

The modulation matrix is like a virtual patch bay, allowing you to choose a source (e.g. envelope, LFO, velocity) and route it to the amp, filter, distortion, pitch, pulse width modulation or auxiliary CV output. Combined with the modulation knob, sequencer and automation recording, you can get the kind of squelches, belches and gurgles you’d make with a Eurorack system. However, it’s missing any kind of effects section, which limits its standalone potential slightly.

The matrix is even more fun when paired with the Mono Station’s dedicated modulation sequencer track, which can trigger the matrix automatically. There’s also an auxiliary CV output that can modulate Eurorack and other analog gear via the sequencer. This, together with the standard CV and gate outputs for triggering notes, make the synth a solid control hub for a larger analog setup. With CV-enabled gear becoming smaller and less expensive, the Mono Station arrives at juts the right moment. 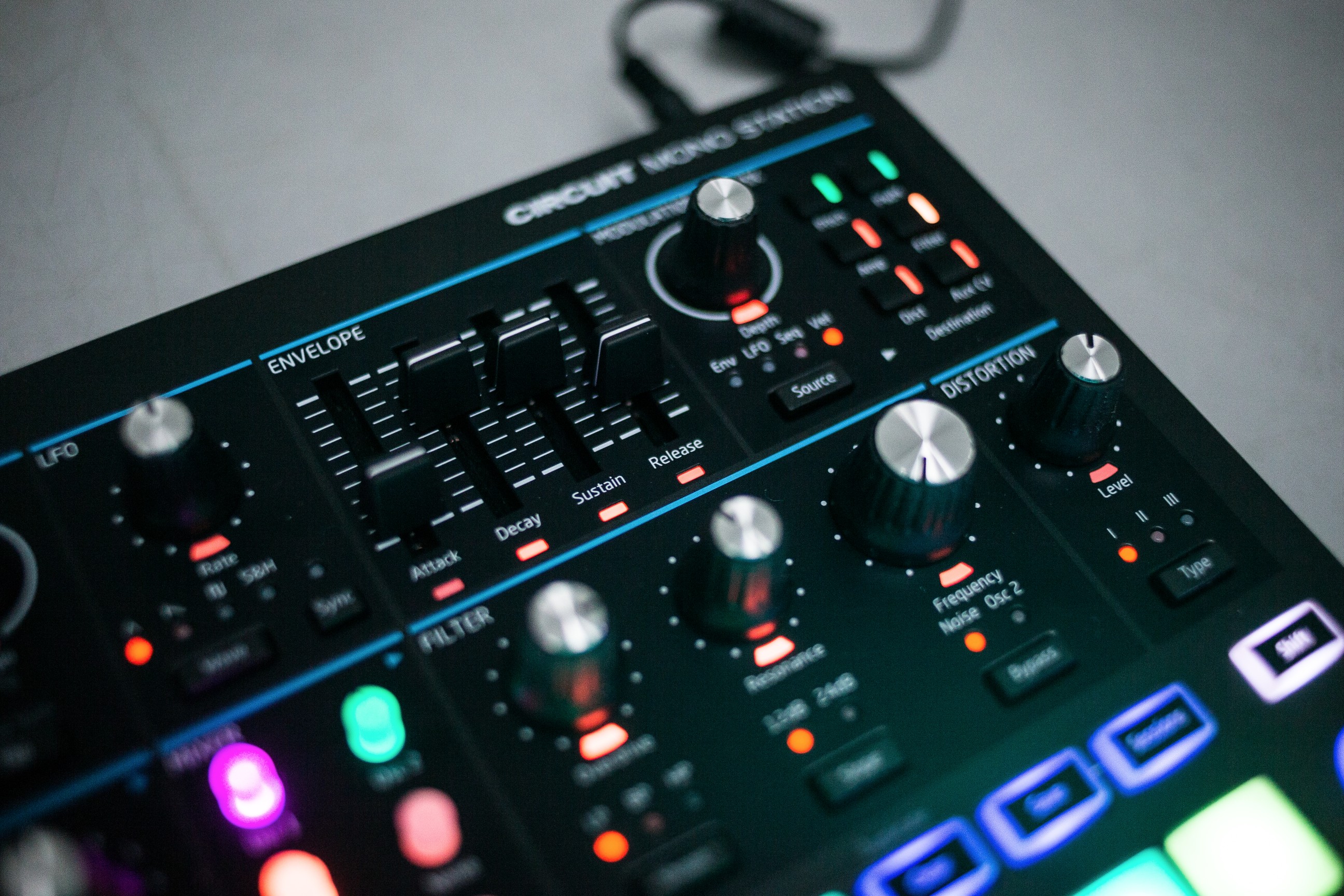 I was initially slightly underwhelmed by the Circuit Mono Station, but once I stopped treating it like a Circuit with an analog synth built in and more like an instrument in its own right, its potential started to open up. When the Mono Station was first announced I thought it was going to be a contemporary take on the 303 – a partner for a drum machine or the original Circuit – but that’s really only a small part of what it’s capable of.

It’s got MIDI for connecting a drum machine if you want, but it really comes alive when you plug it into other analog equipment and start experimenting with the CV outputs. You can even link a Korg Volca using the sync cable if you don’t fancy dropping a couple of thousand on a big modular setup. It’s definitely not a mini-modular in the way that some of the Bastl gear or Make Noise’s 0-Coast is, but there’s something about its tweakability that will undoubtedly appeal to modular heads.

The Mono Station isn’t perfect – a few effects like reverb or delay to expand the synth’s sound-shaping potential wouldn’t have gone amiss, and at $499 it’s over $150 more than the original Circuit, which has two synths and a drum machine. However, the sequencer’s many functions and CV outputs mean that even if you buy the Mono Station as a first synthesizer or something to keep you entertained on the move, there’s more than enough to extend its lifespan beyond the initial rush.

Read next: Novation Peak review: A luxury synth at a reasonable price